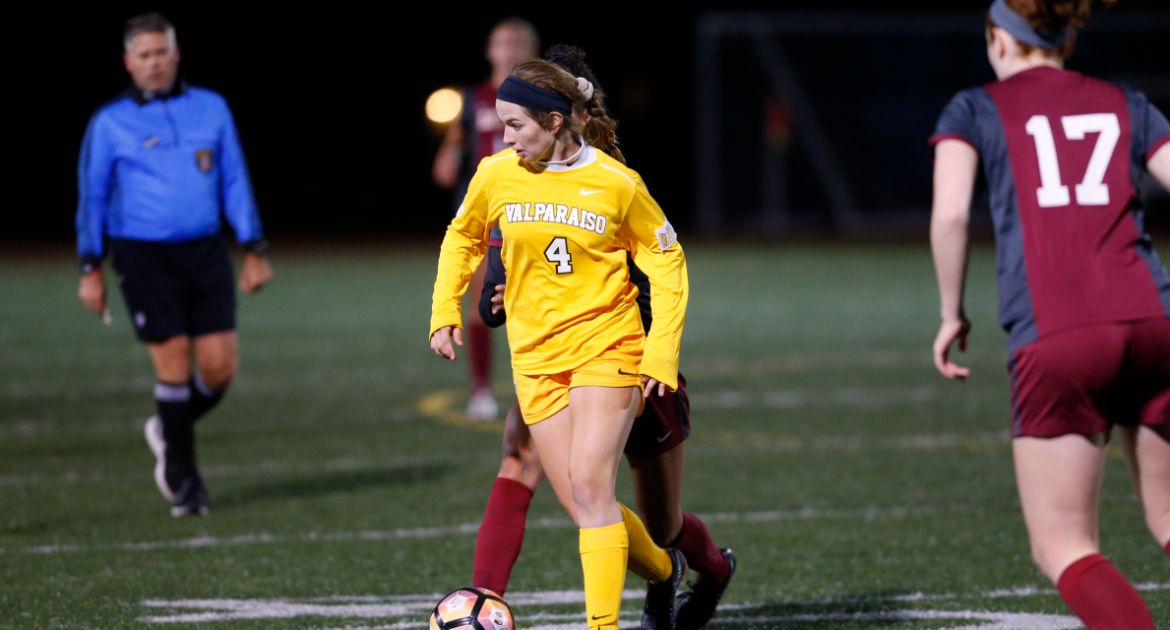 Loyola scored a goal in each half Wednesday night as the Valparaiso University women’s soccer team fell to the Ramblers, 2-0, in MVC action on Brown Field.

How It Happened
- A combination play got the ball to the foot of Loyola’s Jenna Szczesny, the MVC’s second-leading scorer, just inside the top of the box in the 13th minute and Szczesny finished inside the left-hand post to put Loyola on top.
- Perhaps Valpo’s best chance at the equalizer came in the 20th minute, as junior Maria Broecker (Rochester Hills, Mich./Rochester) received the ball at the top of the box, turned and fired a right-footed shot that flew just past the left-hand post.
- Sophomore Kezia Gesell (Winnipeg, Manitoba/Glenlawn Collegiate Institute) made a spectacular point-blank stop in the 35th minute to keep it a one-goal game, stonewalling Aleksa Tataryn from eight yards away with a dive to her right.
- Loyola pushed the lead to 2-0 with a 75th minute tally, as Madison Laudeman won the ball in a scramble in the box following a corner kick and found the back of the net through traffic.
- Gesell came up with another strong save in the 76th minute, coming off her line with Madison Kimball possessing into the box and making the stop.

Inside the Match
- Wednesday marked the 27th meeting in the all-time series between Valpo and Loyola, as the Ramblers are Valpo’s most-common opponent in program history.
- The loss was Valpo’s first home regular season defeat against Loyola since 2010.
- Valpo surrendered multiple goals for the first time since its loss to Middle Tennessee State on Sept. 7.
- Loyola out-shot Valpo on Wednesday by a 17-3 margin. The Ramblers also tallied all five shots on goal and held the 6-1 edge in corner kicks.

Thoughts From Coach Marovich
"Tonight is a great opportunity for us to learn from, because we were a bit off from our normal performance - we weren't able to respond to the goal that we gave away like we've responded in the past. A lot of credit for that goes to Loyola, who just kept pushing forward and kept us on our heels."

"The reality is everything is still in front of us and still in our control, in terms of making the conference tournament. Our team has done a good job of responding consistently all year, and we look to do that again on Saturday."

Next Up
Valpo (4-7-3, 1-3-1 MVC) faces a key conference matchup at UNI on Saturday afternoon at noon, which can be seen live on ESPN3. A win over the Panthers would move Valpo into the MVC Tournament field, as the top six teams make the postseason tournament, with just one matchday remaining.