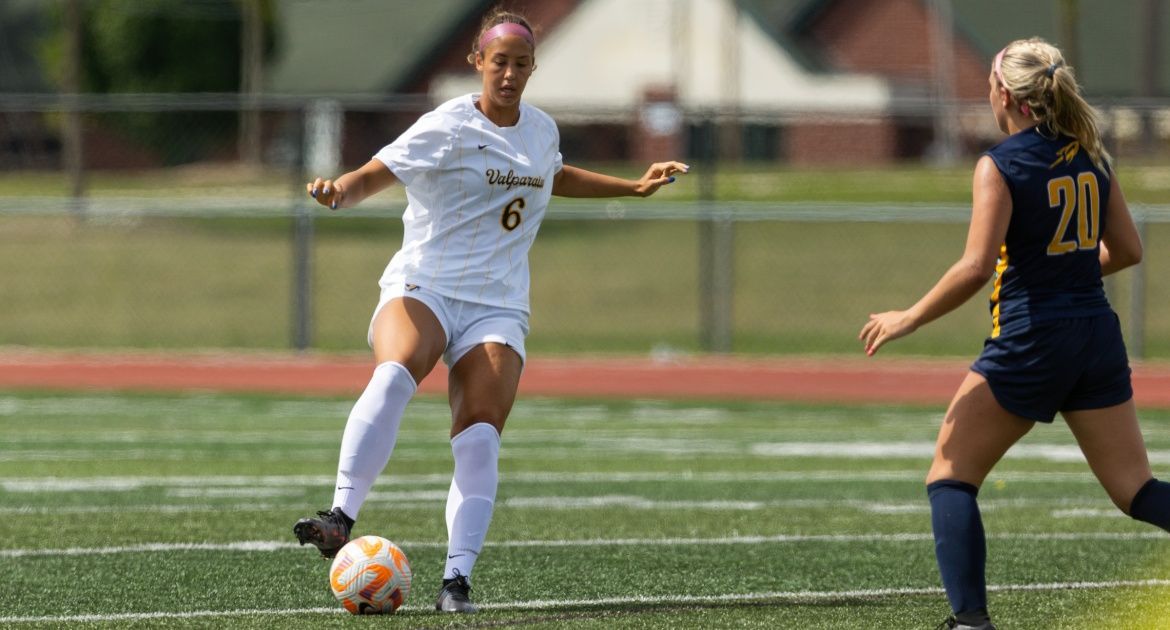 Emma Morrison came off the bench to play 86 minutes at center back Thursday.
Valparaiso at Belmont | October 13, 2022

The Valpo soccer team put together a gritty performance on the road Thursday to come away victorious, overcoming injury and an early one-goal deficit with a pair of goals in the second half to earn a 2-1 victory at MVC newcomer Belmont. The win keeps Valpo within striking distance of Missouri State atop the conference standings.

“As a program, we talk about what piece of yourself are you giving to the team, giving the piece the team needs.”

“Tonight, we didn’t have a great start to the game — that happens over the course of the season. We lose Nicole to injury, Emma steps in. It’s the next player up mentality. Emma goes in and has a fantastic performance — I’m really proud of her for her work tonight, it really speaks to the depth of the team.”

“We had to make a few more changes to the back line because we weren't quite right. Sam comes on, does some really good things — wins headballs, goes to ground for tackles — things that the way the game was going, we needed in that moment.  Sarah comes in and has a strong performance because every day she asks the very best of herself. She’s remained patient, working on her game — had the opportunity to go in tonight, puts in a great shift, and I’m really proud of her.”

“Tonight was what a really good team does — a complete effort, contributions from the bench, giving a performance and handling a game on the road to come away with a gritty win.”

Valpo (6-6-3, 5-1-1 MVC) finishes out the road portion of its schedule on Sunday afternoon at Murray State. The match is slated for a 1 p.m. kickoff and can be seen live on ESPN+.