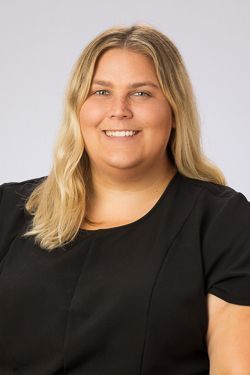 Madison Soliday was named the Director of Football Operations for the Valpo football program in August 2021.

In his second year as a full-time staff member, Valpo finished with a Pioneer Football League record of .500 or better for the third straight season, including the program’s first win at Morehead State since 2006 and first ever win at Marist.

In her first season as a full-time staff member, Soliday was part of a Valpo program that posted its second straight season with a Pioneer Football League record of .500 or better during the Fall 2021 campaign. That marked the first time Valpo had achieved that feat in consecutive seasons since 1999 and 2000. The Beacons won four Pioneer Football League games in the same season for just the third time ever (2017 and Spring 2021) and four league games in any conference for just the third time since 1968.

Soliday has been involved with the Valpo football program since March 2017, first as an undergraduate manager and then as a graduate student handling operations. She graduated from Valpo with a bachelor’s degree in finance and sports management in May 2020.

Soliday’s responsibilities include planning travel, serving as a liaison with campus services, coordinating on-campus recruiting, developing team itineraries and managing schedules for coaches and student-athletes while also coordinating all aspects of the program’s day-to-day operations.