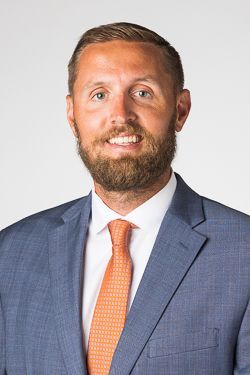 In 2019, Fleming’s Rhode Island offense ranked 13th nationally in passing (3,555) and was one of two programs in FCS football to produce two players with over 1,000 receiving yards that season. In 2018, the Rams ranked 13th nationally in passing efficiency (151.72), 34th in red zone offense (0.846) and 37th in scoring offense (30.1 points per game). Under Fleming’s direction, Rhode Island’s quarterback set a program record for single-season completion percentage and earned second team all-conference honors.

In addition to the aforementioned team successes, Fleming has a track record of aiding players in their football development. Under his watch at Rhode Island, the Rams produced a trio of student-athletes who went on to compete in the National Football League – Aaron Parker (Carolina Panthers), Isaiah Coulter (Chicago Bears) and Kyle Murphy (New York Giants).

Prior to his coaching days, Fleming started his collegiate playing career as a three-year letter winner at the University of Akron from 2008-2012. He earned his bachelor’s in sport management in 2013 after playing linebacker, tight end, full back and special teams during his time with the Zips. After Akron, Fleming graduate transferred to Towson for the 2013 season, but was injured during the preseason and transitioned into a graduate assistant coaching role. He was part of a team that made an FCS national championship game appearance.

What They’re Saying About Coach Fleming

Jeff Hafley, Boston College Head Coach: “Will Fleming is a bright young coach with a huge future ahead. He started as part of BC football on the defensive side, then worked his way into the QB room. He builds great relationships with the players and staff and will be an excellent recruiter. I am excited to see him get back in the coordinator role, and I expect great success.”

Frank Cignetti, Pittsburgh Offensive Coordinator: “Will Fleming is a detailed coach. He knows how to prepare his players and teach the fundamentals and schemes to lead them to success.”

Rob Ambrose, Towson Head Coach: “Will is smart and talented with a great football mind. What stands out to me the most is his ability to relate to his players and get the best out of them.”