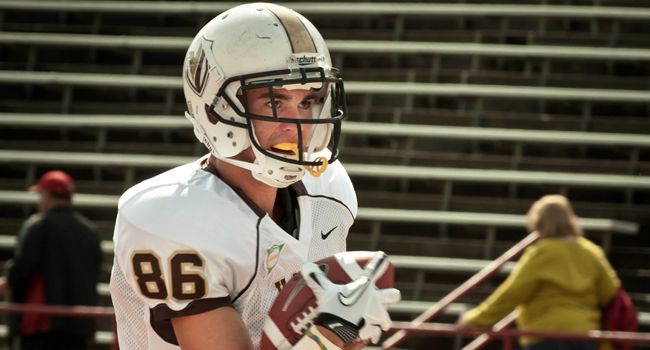 Valparaiso turned the ball over five times on Saturday afternoon and Marist took advantage as the Red Foxes defeated the Crusaders 30-7 at Tenney Stadium in Poughkeepsie, N.Y.

Marist took the lead on the opening possession of the game as Calvin McCoy went off tackle and scored from 15 yards out just two minutes into the contest.

The Crusaders responded two possessions later. Eric Hoffman (Manitowoc, Wis./Lincoln H.S.) scrambled and connected with Cole Anderson (Highlands Ranch, Colo./Valor Christian H.S.) from five yards out to tie the game at seven at the 5:16 mark of the opening quarter.  Anderson caught the ball at the back of the end zone, getting his foot down while maintaining possession.

Marist took the lead early in the second quarter on a 35-yard Jason Myers field goal, his first of three on the afternoon.

Valpo trailed just 10-7 late in the first half when Cody Gokan (Mundelein, Ill./Mundelein H.S.) recovered a fumble that Laurence Treadaway (Detroit, Mich./Orchard Lake Saint Mary’s H.S.) knocked loose.  However, as the Crusaders were driving, a fumble gave the ball back to the Red Foxes.

“We had a great opportunity after we forced a turnover,” head coach Dale Carlson said.  “We had a positive play and just put the ball on the ground.  It was a momentum changing play when they went down and scored.”

Tommy Reilly found Kevin Fitzpatrick down the right sideline from 28 yards out just before halftime and Marist took a 17-7 lead into the locker room.

The Crusaders fumbled the opening snap of the second half but the defense forced a field goal from Myers, this one from 28 yards out, and the lead grew to 20-7.

“We did a good job defensively to hold them to a field goal but it was three more points we had to overcome,” Carlson added.  “It really hurt the psyche.”

An interception led to another Marist touchdown, this one a 32-yard pass from Reilly to Fitzpatrick and the Red Foxes had a 20-point lead late in the third quarter.

Myers added one more field goal from 21 yards out with 8:35 to play in the final quarter to cap the Marist scoring.

“The challenge was four our offense to step up and make plays,” Carlson concluded.  “Turnovers will kill you every time though.”

Treadaway led Valpo with 14 tackles defensively as well as the forced fumble while Ryan Mundy (West Lafayette, Ind./Harrison H.S.) made 11 stops.  Gokan added an interception in addition to the fumble recovery while also registering 10 tackles.

Valparaiso (0-9, 0-6) will return to Brown Field next Saturday afternoon for the final home game of the season.  The Crusaders will host Campbell on Senior Day with kickoff slated for 1 p.m.

Game Notes: Marist has won all three meetings between the two schools … the Crusaders registered seven tackles for loss on the afternoon … Tim Bennett (Joliet, Ill./Joliet Catholic H.S.) had four catches for a team-high 46 yards … eight different Crusaders caught a pass on the afternoon.