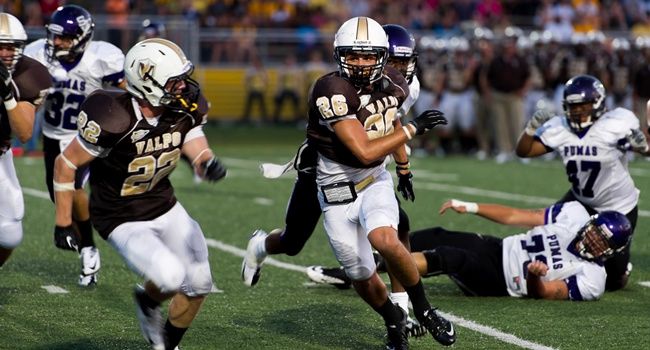 The Valparaiso football team opened up the road portion of its 2012 schedule on Saturday afternoon, falling 59-0 to Youngstown State, which entered the game ranked #6 nationally among FCS squads, in Youngstown, Ohio.

The Penguins jumped on top of the Crusaders early, scoring three touchdowns in just over five minutes to start the contest. Kurt Hess hit Christian Bryan for a 24-yard touchdown pass on YSU's first drive, and following a punt block that gave the Penguins possession inside the red zone, Hess picked up a second TD pass on the first play, connecting with Will Shaw from 11 yards out. The Crusaders then fumbled on their next possession and the Penguins' Jeremey Edwards returned the fumble seven yards for YSU's third score.

Torrian Pace scored a pair of touchdowns on the ground in the second quarter, while Demond Hymes and Jamaine Cook each had rushing scores in the second stanza as well. David Brown connected on a field goal early in the third quarter as well for the Penguins. Valpo would get the ball into the red zone on a 16-play, 9:32 drive following the field goal, as sophomore Gabe Ali-El (Baltimore, Md./Polytechnic Institute) carried for 21 yards to the YSU 16-yard line, but a penalty pushed Valpo out of the red zone and the Crusaders would turn the ball over on downs.

Youngstown State added the game's final score on Hymes' second rushing TD of the day in the fourth quarter. The Crusaders pushed the ball into Penguin territory twice in the game's final 15 minutes, but lost the ball on downs once and were forced to punt on the other occasion.

Redshirt sophomore Eric Hoffman (Manitowoc, Wis./Lincoln) was 28-of-37 through the air passing the ball for the Crusaders and did not throw an interception, but only threw for 139 yards while completing passes to 12 different Valpo receivers. Redshirt sophomore Fred Gladney (Milwaukee, Wis./Dominican) led the Crusaders with seven receptions for 31 yards, while Ali-El paced the effort on the ground with seven carries for 38 yards. Valpo was able to net just 47 yards rushing and ended the day with 190 total yards of offense versus 524 for Youngstown State.

Valparaiso (0-2) returns to Brown Field next Saturday afternoon, hosting Duquesne. Kickoff is set for 1 p.m., and if you can't make it to Brown Field, you can listen live via the Valpo Sports Radio Network on WAKE, 1500 AM. Links for the live audio, as well as live stats, will also be available at www.valpoathletics.com.