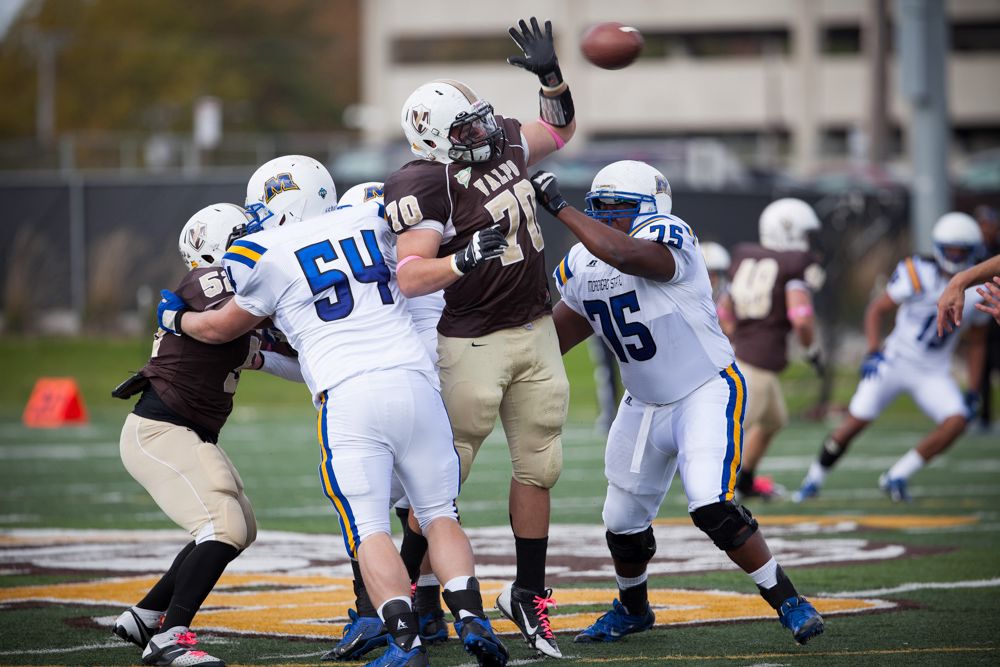 It was a tale of two halves on Saturday afternoon at Brown Field.

Even with wide receiver Fred Gladney (Milwaukee, Wis./Dominican) on the sidelines due to injury, the Crusader offense thrived in the first half as it put up 28 points on Morehead State. Those 28 points were all the Brown and Gold pushed across as the Eagles (3-4, 3-1 PFL) scored 23 unanswered in the second half en route to a 42-28 victory over Valpo.

The Valpo defense scored another takeaway on its next stand. Senior Patrick Derbak (Schaumburg, Ill./Schaumburg) forced a fumble on a Morehead State 1st and 10 at its own 38. Alan Porter Jr. (Maywood, Ill./South) pounced on the loose ball and the Crusaders again started with advantageous field position.

Hoffman and the offense put together a 7-play, 40-yard drive to extend the Crusader lead to 14-0. Hoffman made a solid sell on an option play as he scampered in for the touchdown from two yards out.

The Eagles cut into Valpo's lead on their next drive when Gahafer went deep to Mason Rutherford for a 51-yard touchdown reception. Luke Boyd's extra-point attempt clanged off the upright to keep it a 14-6 game.

Morehead State made it a two-point game a minute and a half into the second quarter. The Eagles constructed a 12-play, 80-yard drive capped off by a Brandon Bornhauser one-yard dash. Gahafer was stuffed at the one-foot line on the two-point conversion attempt and the scoreboard read 14-12 Crusaders with 13:30 to go in the first half.

Hoffman fired his second TD pass of the afternoon on the Crusaders' ensuing drive. The 22-yard catch by Tony Taibi (Arlington Heights, Ill./Rolling Meadows) made it a two-score game.

The back-and-forth scoring continued as the Eagles wasted no time recording another touchdown. Gahafer hit Justin Cornwall with a 15-yard pass to bring Morehead State within two points, 21-19.

With the clock under two-and-a-half minutes in the second quarter, Hoffman finished off a 33-yard drive with a 7-yard TD pass to Steve O'Bryant (Chicago, Ill./Tinley Park [Carthage]). Saturday marked the fourth time this season that the redshirt junior QB threw at least three touchdown passes in a game.

Morehead State came out of the break and quickly assembled a scoring drive on its first possession. Rob Harden burst through from two yards out to make it a 28-26 ball game with just over twelve minutes remaining in the third quarter.

Valpo was able to navigate downfield on its next possession before its drive was stopped just outside the red zone. Faced with a 4th and 3 at the Morehead State 25, the Crusaders went for it but Hoffman was stopped just shy of the marker. Riding the momentum, the Eagles took their first lead of the game two minutes later thanks to a 38-yard field goal by Boyd.

Hoffman's only interception came on the next drive. Valpo was knocking on the door at the Morehead State 17-yard line when a pass fired towards the endzone was picked off by Michael Jackson. A flag was thrown for what was originally thought to be defensive pass interference, but after a meeting of the minds, the officiating crew decided there was no penalty on the play.

Morehead State clung to a 29-28 advantage after three quarters of play.

The Eagles added an insurance score in the first two minutes of the fourth quarter. Rob Harden's second rushing TD of the half made it a 35-28 contest.

The Crusaders appeared to be on their way to tying the game on their following drive. Valpo was on Morehead State's 19-yard line facing a 4th and 5 when Hoffman found Cassara across the middle. Cassara was stopped just shy of the first-down marker and the Eagles took over on downs.

The Morehead State offense affirmed its lead by responding with an 85-yard drive to extend the lead to 42-28.

A late fourth-quarter Crusader drive stalled at the Eagles' 23 when a pass attempt to Cassara failed on 4th and 3.

Morehead State ran out the clock as the 2,287 in attendance fled Brown Field.

Hoffman compiled a 29 of 48 day passing for 326 yards and three touchdowns. His counterpart finished the day 41-for 52 with three touchdown passes and three interceptions. Gahafer's 458 passing yards were one shy of the Morehead State school record.

Derbak had a banner day for the Crusader defense as the senior linebacker led all players in tackles with 15. The forced fumble was his second of the season. His second-quarter interception was the first on the year. Sophomore Alex Green (Zionsville, Ind./Zionsville Community) and junior Ryan Mundy (West Lafayette, Ind./Harrison) both had twelve tackles each.