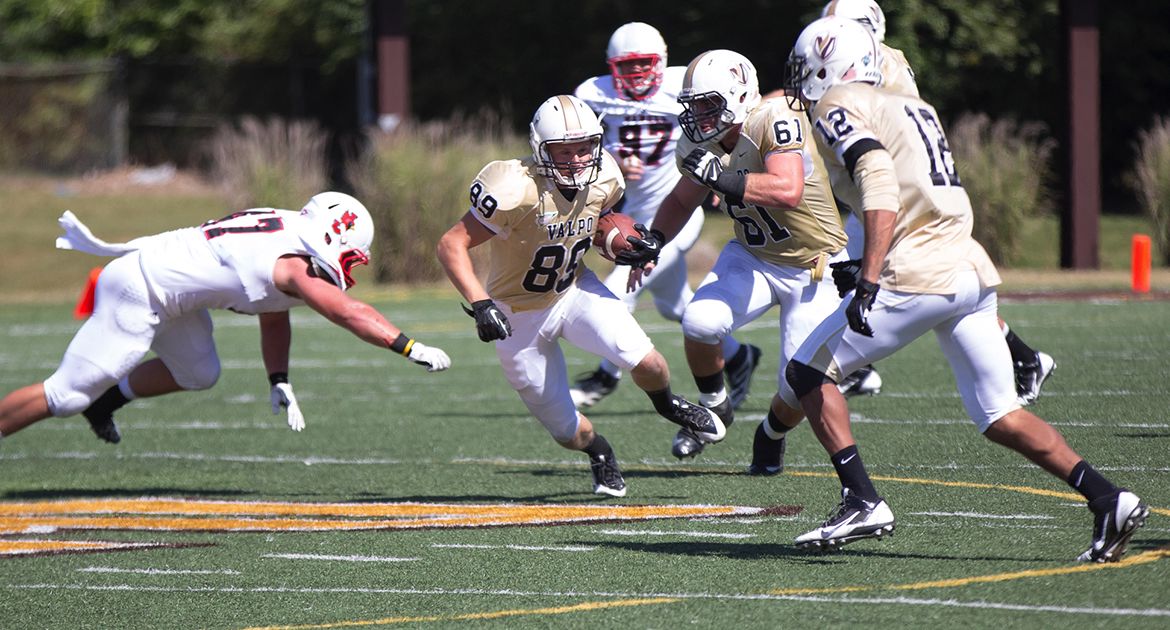 Sophomore Austin Etzler was on the receiving end of a 15-yard pass Thursday night in Macomb.
Valparaiso at Western Illinois | August 28, 2014

The Crusaders opened 2014 with a 45-6 loss to Western Illinois, but a late touchdown earned Valpo its closest contest versus a scholarship program since 2003.

Severe weather in the greater Macomb area pushed kickoff back 32 minutes. Once the teams got underway, running back J.C. Baker and the Leatherneck offense went right to work. Western Illinois assembled a 7-play, 65-yard touchdown drive right out of the chute. The Crusader defense forced a 4th-and-1 during the opening drive, but Baker moved the chains with a five-yard scamper. WIU quarterback Trenton Norvell hooked up with Joey Borsellino for a 33-yard pass to thrust the Leathernecks deep in Crusader territory. Baker put Western Illinois on the board on the following play, giving the home team a 7-0 advantage three minutes into the tilt.

The question surrounding the Valpo starting quarterback position was answered when senior Ben Lehman (Elgin, Ill./Saint Edward Central Catholic) emerged from the sidelines to lead the Crusaders on their opening drive. Facing a 3rd-and-8, Lehman rifled a completion to Tanner Kuramata (Rancho Cucamonga, Calif./Claremont), but the senior was two yards shy of a fresh set of downs.

Western Illinois knocked on the door of the Valparaiso red zone on its ensuing drive. Valpo's defense forced a 4th-and-3 on its own 23 before stuffing a Norvell rush and causing a turnover on downs.

The Leathernecks doubled their lead at the conclusion of the first quarter. Norvell capped off an 80-yard scoring drive when he tossed a 9-yard TD pass to Larry Harris. The Nathan Knuffman extra point made it 14-0 after 15 minutes.

The Crusaders drove deep into Leatherneck territory in their first drive of the second stanza. Head coach Dave Cecchini opted to go for it on a 4th-and-2 at the WIU 29-yard line; however, Lehman sophomore Austin Etzler (Elida, Ohio/Elida) couldn't connect on a short pass to prolong the drive.

Baker and the WIU offense continued to churn out significant yardage on the following drive. The senior RB singlehandedly moved the Leathernecks into the Crusader red zone following four rushes. After pounding the ball on the ground for the majority of the drive, Norvell went to the air and flung a 17-yard touchdown throw to Hi-C Scott.

Trailing 21-0, Scott Staal (Grand Haven, Mich./Grand Haven) made his Valparaiso debut with just under ten minutes remaining in the second quarter. Kuramata caught a key pass from the redshirt sophomore on a 3rd-and-long before junior Brandon Hall (Muskegon, Mich./Orchard View) penetrated into WIU territory following a 14-yard gain. The drive eventually stalled at the Western 33-yard line after the Crusaders were unable to convert on a 3rd-and-7.

The teams traded three-and-outs before a Western Illinois drive at the end of the first half had the Leathernecks poised to add more points. Norvell hit Lance Lenior, Jr. with a 30-yard pass on a fourth down and the sophomore receiver was well on his way to a score when Alex Green (Zionsville, Ind./Zionsville Community) recorded an impressive touchdown-saving tackle.

The Cruasder defense produced another gold-star moment on the very next play when freshman Kye Hall (New Smyrna Beach, Fla./New Smyrna) took Baker down well behind the line of scrimmage, pushing WIU back from the Valpo 2 to the 7. Those two plays undoubtedly saved the Brown and Gold four points as Western Illinois had to settle for a 24-yard field goal.

The Leathernecks led Valpo 24-0 at the break. Kye Hall and Melvin Graham III (Indianapolis, Ind./North Central) paced the Crusader defense with seven tackles apiece in the first half.

Western Illinois used a four-play, 80-yard drive to drive its lead to 31-0 halfway through the third quarter. Hi-c Scott was on the receiving end of a 38-yard TD pass from Norvell, the QB's third touchdown toss of the evening.

Valpo's only offensive turnover occurred on its next possession when David McDaniel picked off Lehman. Under heavy pressure, Lehman attempted to get rid of the ball, but didn't get enough on the throw to clear the sidelines and WIU took over on Valpo's 40-yard line.

The Leathernecks wasted no time tacking on to their lead. Baker hauled in a pass from Norvell and broke loose for a 40-yard touchdown that took just 21 seconds.

Western Illinois made it 45-0 in the fourth quarter, but the Crusaders never wavered.

Brandon Hall's two-yard touchdown rush with 2:25 to play was the climax of a 17-play, 77-yard drive that ate up nine and half minutes of clock. A botched snap on the extra-point attempt led to Jacob Newman (Lawrenceburg, Ind./Lawrenceburg)'s kick going directly into a gaggle of Leathernecks.

Western Illinois held on for a 45-6 victory, its 14th consecutive triumph in a home opener.

A major area of emphasis for the Crusaders entering Thursday evening's game was avoiding penalties. Western Illinois was whistled for ten infractions compared to two for the Brown and Gold.

"There certainly were some positives to take away from tonight. We stayed very disciplined throughout the game. I was a little disappointed in the second half with the way our defense gave up some big plays, mainly due to poor tackling. Other than that, we need to continue to grow and work on fundamentals. This was a very, very talented team we faced tonight," Cecchini said after the game.

Offensively, Kuramata registered a game-high seven catches for 76 yards. Lehman finished the night 18-for-27 for 151 yards and just the one interception. Staal made good on three of his eight pass attempts for 23 yards.

Despite surrendering 45 points, a number of positives materialized on the defensive side of the ball. Kye Hall led all defenders with 10 tackles, including one for a loss. J.J. Nunes (Baltimore, Md./Baltimore Lutheran) showed flashes of excellence as the sophomore becomes more and more acquainted with the safety position.

The Crusaders will have an extra couple days to prepare their home opener versus Saint Joseph's (Ind.) next Saturday. Kickoff at Brown Field is slated for 7:00 pm CT. Valpo aims to avenge the Pumas following a 36-34 loss in 2012, and a 34-31 defeat in Rensselaer last season.