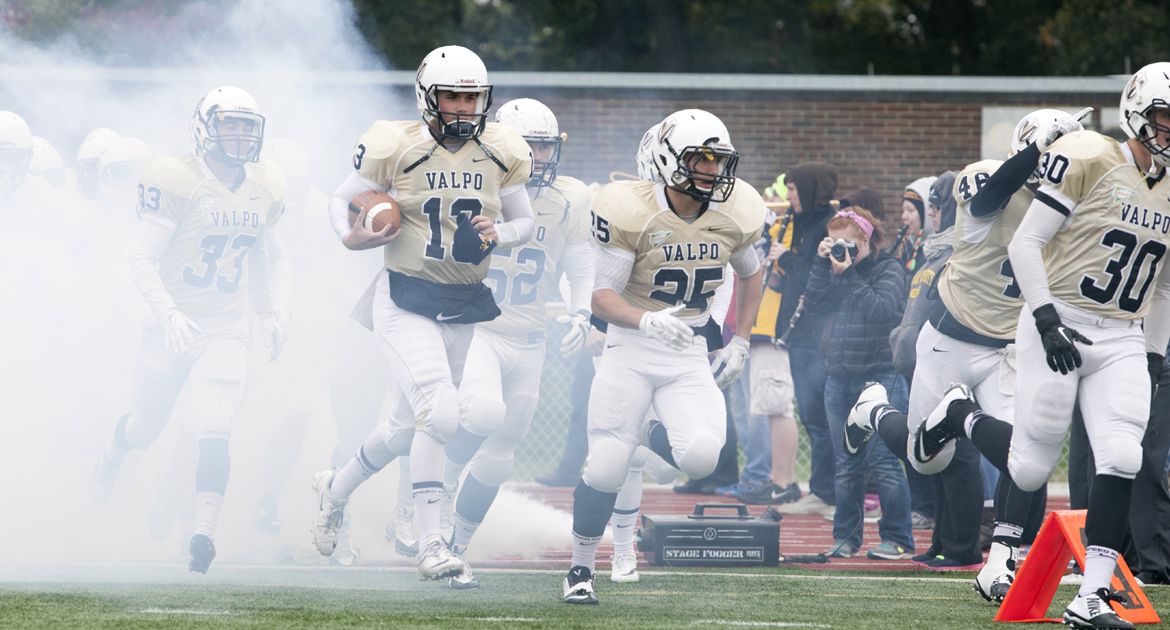 Marist used a 21-point second quarter to catapult itself to a 35-7 win over Valparaiso at a blustery Brown Field.

Intermittent precipitation coupled with temperatures in the upper 30's led to a wet track and a sloppy Saturday. The Crusaders had two punts blocked and put the ball on the turf five times (one lost).

"Obviously this was an extremely disappointing game. This is the first time that I've felt like our guys didn't answer the call, did not handle adversity," head coach Dave Cecchini said after the game.

The Crusaders drew first blood when Kuramata recorded the first rushing touchdown of his career. The wide receiver took a handoff from Ben Lehman (Elgin, Ill./Saint Edward Central Catholic) and leapt over the pylon on the Crusader sideline to give Valpo a 7-0 lead.

Hijinks on special teams altered the course of the rest of the game, though.

Marist tied the game with a gift-wrapped first touchdown just four and a half minutes after Valpo's opening score. Standing on his own 15-yard line, punter Alex Kozlowski (Novi, Mich./Detroit Catholic Central) mishandled the snap and the Red Foxes took over on the Valpo 14. Three plays later, Atiq Lucas barreled in from two yards out to knot the game at 7-7.

Senior Devan Gadson (Orlando, Fla./Freedom) received the ensuing kickoff and was well on his way to a lengthy return before Marist kicker Mike Maccarone stripped him at midfield. Vinny Fuschetto pounced on the loose ball and the Red Foxes again began a drive with optimal field position.

Marist was unable to convert the opportunity into points, however. Maccarone lined up for a 44-yard field goal, but Jarrett Morgan (Cooper City, Fla./Cooper City) penetrated the line and blocked the attempt. The Marist defense forced a Crusader three-and-out and a short punt into a stiff wind allowed the Red Foxes to start their next possession at their own 45.

Quarterback Anthony Francis went for the jugular on the first play. Wide receiver Joe Tralli raced past his defender to haul in a 55-yard pass from Francis. Maccarone's extra point gave the visitors a 14-7 lead.

A swarming Red Foxes defense forced a Valpo three-and-out on its next possession. Special teams again betrayed the Crusaders as Kozlowski's punt was stuffed by Willie Barrett at the Valpo 31. Aided by a 21-yard pass to Tralli, Marist set up shop inside the Valpo 5 before Lucas registered his second rushing TD of the afternoon.

The Crusaders trailed 21-7 with 11:29 remaining in the first half. They were never able to regain their poise after the blunders on special teams. Following the pair of unsuccessful punt attempts, the Brown and Gold ran just one play on Marist's side of the field in the second and third quarters.

Valpo appeared to have a scoring drive in the works in the opening minute of the fourth quarter. Trailing 28-7, Lehman led the Crusaders to the outskirts of the Marist red zone after a nifty 40-yard completion to Andrew Cassara (Mokena, Ill./Aurora Christian). Three plays later, Valpo was faced with a 4th and 2 at the 24-yard line. Brandon Hall (Muskegon, Mich./Orchard View) got the call and powered his way past the first down marker, but fumbled on his way down to the ground. Tight end Brett Fox (Plainfield, Ill./North) fell on the pigskin, but back near the line of scrimmage. The play resulted in a turnover on downs.

The Red Foxes earned their final touchdown halfway through the fourth quarter. Marist called nine consecutive rushing plays before Marcellus Calhoun jammed his way into the end zone to make it 35-7.

Marist held on by that score. In all six of their contests against the Red Foxes, the Crusaders have been held to seven points or fewer each time.

Lehman finished the afternoon with 107 passing yards on ten completions. Hall racked up 84 yards on 17 carries, including a long of 16 yards. Kuramata registered four rushes for 28 yards, including Valpo's only score.

Valpo (1-4, 0-2 PFL) will host Missouri Baptist (0-6) next Saturday as part of Homecoming festivities. The Crusaders and Spartans have never met on the gridiron as 2014 represents the inaugural year of football at Missouri Baptist.

Links to the audio, video, and live stats will be available at Valpoathletics.com.