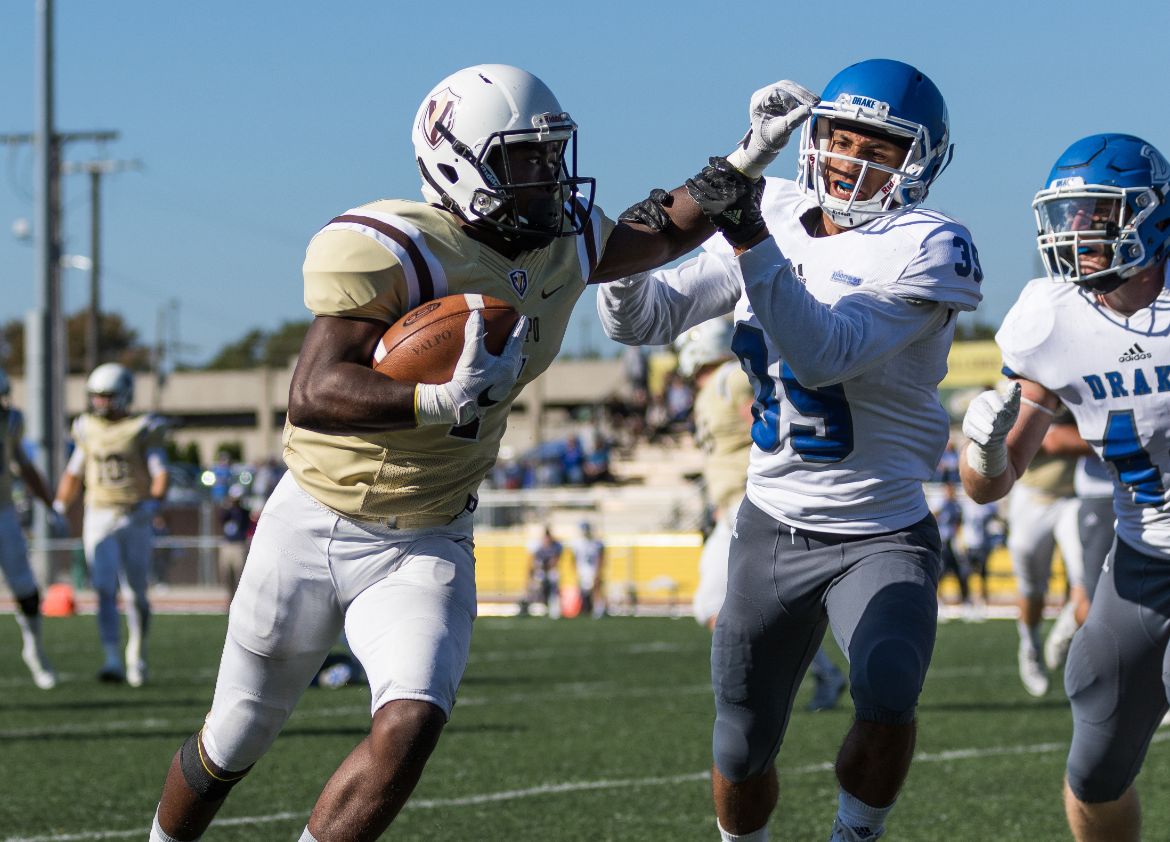 Jean Rene is back for his junior season at WR.
Valparaiso at Montana | September 02, 2017
Related Links
Related Links

This Week in Crusader Football: The Valparaiso University football team will kick off the new season on Saturday afternoon at Montana. This marks the beginning of a much-anticipated fourth season under Dave Cecchini and his staff, as the Crusaders bring back their most experienced group yet in an effort to build upon last year’s four-win campaign.

Following the Crusaders: For the 12th straight season, WVUR (95.1 FM, Valparaiso) is home to all 11 Crusader football games in 2017. Todd Ickow is back for his 27th season as Valpo’s play-by-play broadcaster, while sports information director Brandon Vickrey will add color commentary this week. There will be a video feed available behind a paywall via GoGriz.com. Links to live video, audio and stats will be available on ValpoAthletics.com.

Head Coach Dave Cecchini: Cecchini is in his fourth season as the head coach of the Crusaders. He enters this season with a 9-24 record, both overall and in three years at Valpo. In his first season as head coach of the Crusaders, Cecchini led the program to a four-win season, its highest win total since 2007. The team matched the four win total in 2016, Cecchini’s third year. Prior to arriving at Valpo, Cecchini served as offensive coordinator/quarterbacks coach at Lehigh for four years.

Series Notes: This marks the first ever meeting on the gridiron between Valpo and Montana.

Big Stage: Saturday’s game at Montana will be played inside Washington-Grizzly Stadium, which features a stadium capacity of 25,217. This marks the largest venue the Crusaders have played at in terms of stadium capacity since Sept. 25, 1999 at Yale.

On the Uptick: The 2016 season provided significant improvement for the Crusaders, who finished with their highest Pioneer Football League win total since 2003 and equaled their highest overall win total since 2007. The 2016 season concluded in style, as Valpo knocked off Jacksonville 42-39, a team the Crusaders lost to by 45 points the year prior.

Experienced Crew: The Crusaders bring back a team laden with experience this season. The Crusaders return 995 of their 1,112 rushing yards from a year ago with all of their top seven rushers back on the team. All five players who had 200 or more receiving yards a year ago are back, and overall the Crusaders return 13 of the 17 players who caught at least one pass. Valpo’s top seven players in terms of all-purpose yards are back. The team brings back 33 of its 34 touchdowns scored last season. On special teams, the Crusaders bring back every punt, field-goal attempt, extra-point attempt and kickoff and retain 48 of their 49 kickoff returns.

Scouting Montana: The Grizzlies finished the 2016 season at 6-5 and lost four of their last five games, missing the playoffs for just the third time in the last 24 years. The Grizzlies were selected to finish sixth in the Big Sky this season, according to a preseason polling of the conference’s media and coaches. Montana features three preseason all-Big Sky selections - OT David Reese, WR Jerry Louie McGee and LB Josh Buss. Montana finished the 2016 season ranked No. 25 nationally in the final FCS Coaches’ poll and just outside of the STATS FCS Top 25 with 30 votes. Lindy’s Sports Magazine has the Grizzlies ranked 24th in their annual FCS poll. Montana is under the direction of Bob Stitt, who is in his third year in charge of the program. The Grizzlies have enjoyed 30 winning seasons in the past 31 years.

Montana Against the PFL: Montana’s most recent game against a Pioneer Football League team came in a 2015 first-round NCAA FCS playoff game as the Grizzlies topped San Diego 52-14. Montana will face a PFL foe again next season when it hosts Drake on Sept. 8, 2018 and will play Morehead State in 2020.

Other 2016 Nuggets: Last season, Valpo was one of only two teams in the nation to lose just one fumble all year. Lehigh, the former home of Cecchini and a number of Crusader assistants, was one of three schools tied for third nationally with two fumbles lost a year ago. Valpo’s only lost fumble came in the season opener on Sept. 3 at Illinois State. The Crusaders did not lose a fumble in the remaining 10 games… The Crusaders have not lost a fumble in league play since the 2015 finale at Jacksonville, and haven’t lost one at Brown Field since Nov. 14, 2015 against Morehead State… Valpo’s defense also thrived in fourth-down situations, allowing opponents to convert on just five fourth downs, tied for the fewest in the PFL. Opponents’ 25 percent success rate on fourth down against the Crusaders was the second-lowest in the league… Valpo enjoyed a +5 turnover margin, the second-best in the PFL.

Looking Ahead: This marks the first of three nonleague games to begin the season, with two road games sandwiched around a home date with Duquesne next week on Saturday, Sept. 9 at 1 p.m. The Crusaders will begin PFL play on Sept. 23 at Drake.