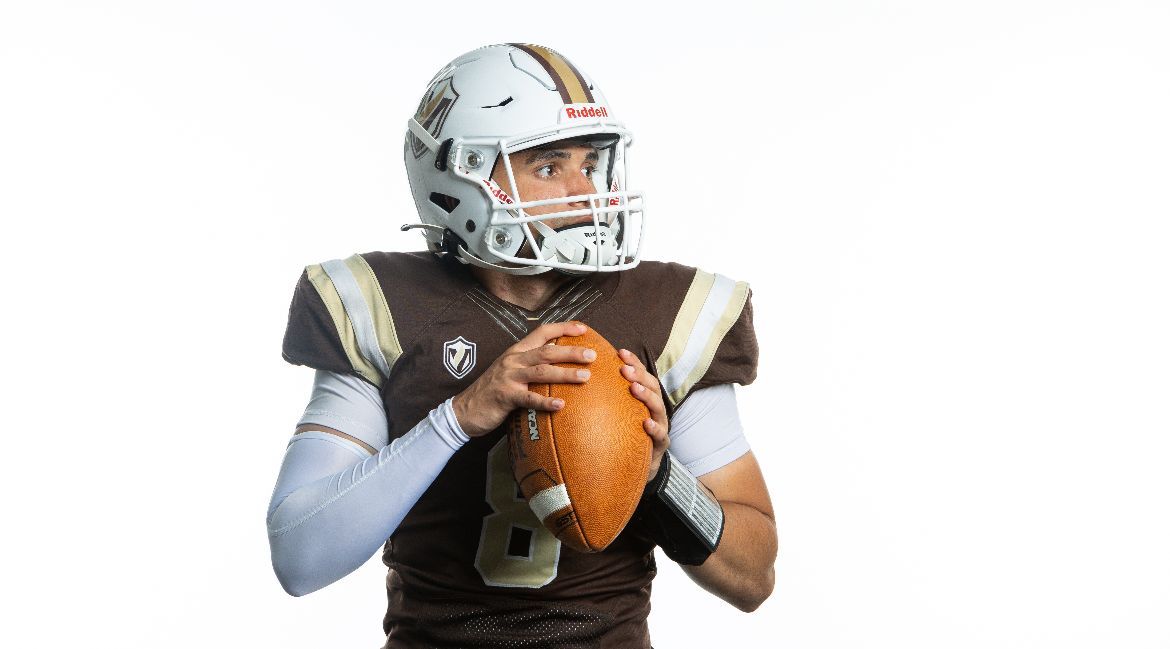 This Week in Valpo Football: After facing a challenging nonconference schedule, the Valparaiso University football team will kick off Pioneer Football League play this week as the team hits the road for the third time in the first four weeks of the season. The Beacons will visit Drake on Saturday in Des Moines, Iowa with hopes of kicking off PFL play in winning fashion.

Previously: Valpo incurred a 28-18 setback to Ivy League foe Dartmouth in front of a raucous crowd of 3,856 at Brown Field in Saturday’s home opener and the first game without capacity restrictions since 2019. Two safeties, two field goals, a touchdown and an extra point accounted for the Valpo scoring on a day where the Beacons boasted three fumble recoveries, two by Austin Martins. Robert Washington ran for 117 yards to lead the offense.

Series Notes: Drake holds a 25-4 advantage entering the 30th meeting between the two teams, which will take place this week. Valpo prevailed 10-7 behind a stalwart defensive effort in the most recent matchup on April 3, 2021 following Drake’s 17-6 victory at Brown Field on March 20. The two teams met twice in the same season due to an unusual schedule in the pandemic-altered year. The April 3 win marked the program’s first-ever success story in Des Moines in 14 visits. The triumph snapped a 17-game head-to-head losing streak that dated back to 2003.

Following the Beacons: This week’s game at Drake will be carried on ESPN3. The hometown radio call will be available on 95.1 FM WVUR, ValpoAthletics.com and the TuneIn Radio app with Todd Ickow and Brandon Vickrey describing the action. For in-game social media updates, follow @valpoufootball on Twitter. Links to live video, audio and stats will be available on ValpoAthletics.com.

Head Coach Landon Fox: Landon Fox (5-16) is in his third season as the head coach of the Valparaiso University football program in Fall 2021. During his second season at the helm in Spring 2021, Fox was a finalist for the Eddie Robinson Award – which is presented annually to the FCS National Coach of the Year – after guiding Valpo to its best winning percentage since 2003 and tying for the squad’s best winning percentage since 1999. He led his team to Pioneer Football League runner-up honors, the program’s highest finish in the league standings since the PFL championship season of 2003. Fox’s defensive roots paid dividends on that side of the football in his second year at the helm, as the team enjoyed its best defensive season in four decades. Valpo held opponents to 283.3 yards per game, the program’s best total defense in the last 40 years. Valpo limited the opposition to 172.2 passing yards per game, the program’s best passing defense since 2008. In addition, the squad boasted its best rushing defense (111.2 yards per game) and scoring defense (18.7 points per game) since 1999. In Year 1 of the Fox Era in 2019, Valpo ranked in the Top 5 in the PFL in scoring defense (32.0, fifth), total defense (381.6, fourth), rushing defense (184.2, fourth) and passing defense (197.3, fifth). After spending the previous 11 seasons as the defensive coordinator and secondary coach at the University of Dayton, Fox was named the head football coach at Valpo prior to the 2019 season. He helped the Flyers finish with 10 winning seasons in his 11 years on staff and guided a defensive backfield that produced one All-American, four Academic All-Americans, two PFL Special Teams Players of the Year and three corners who were invited to NFL Rookie Minicamp. Prior to joining Dayton’s staff, Fox served as the linebackers coach and special teams coordinator at Wayne State University in Detroit from 2005-2007. He also spent time as a defensive graduate assistant at Ball State University (2004), Dayton (2002-2003) and Lakeland College (2001). Fox began his coaching career as an assistant varsity coach at Preble Shawnee High School in Camden, Ohio during the 2000 season. During his playing days, Fox was a team captain and all-conference performer at Defiance College in Defiance, Ohio from 1995-1999 and graduated with a degree in physical education and health in May 2000 before earning his master’s degree in education from Lakeland in May 2002.

Valpo in PFL Openers: The Beacons will attempt to win the Pioneer Football League opener for the second straight season after going on the road to beat Butler in the spring. Prior to the Spring 2021 PFL-opening victory, Valpo’s last win to begin league play was 2016 vs. Davidson. A win this week would allow Valpo to start the conference docket with a victory in consecutive years for the first time since 2005 and 2006.

Ground Gains: Running back Robert Washington accrued 117 rushing yards in the Sept. 18 game vs. Dartmouth, representing a season high and his fifth 100-yard rushing game in a Valpo uniform in just his ninth appearance. Over the last five seasons, there have been 10 100-yard rushing games by Valpo players, and Washington has accounted for half of them.

Twice is Nice: Defensive lineman Austin Martins had a pair of fourth-quarter fumble recoveries to go along with a career-high six tackles including five solos in the Sept. 18 game vs. Dartmouth. He became the first Valpo player with two fumble recoveries in a single game since Mike Jones on Oct. 8, 2005 vs. St. Joseph’s. For his efforts, Martins was named the College Sports Madness PFL Defensive Player of the Week. He became the first Valpo player to earn a weekly honor this season after the program garnered seven weekly awards from either the league office or College Sports Madness during the six-week Spring 2021 season. Entering Week 4, Martins is one of just 13 players tied for the FCS lead with two fumble recoveries this season.

Safety Dance: When Trey Psota sacked the Dartmouth quarterback for a safety on the first Big Green possession of the game on Sept. 18 at Brown Field, it represented Valpo’s first safety since a team safety on Sept. 2, 2006 in a 54-0 win over Wisconsin Lutheran. Lightning struck twice on Sept. 18, as a Dartmouth punt attempt in the third quarter resulted in a safety as the snap sailed through the back of the end zone. This is the first time Valpo has had two safeties in the same season – let alone the same game – in the last 20 years. Psota became the first Valpo individual to receive credit for a safety in over two decades as the only other Valpo safeties in that time period were of the team variety. Davidson and Butler each had two safeties in 2017, which was the last time any PFL team had multiple safeties over the entire season. Valpo was one safety away from tying the single-game national record of three, which has occurred three times in FCS history.

A Bittner Block: Brett Bittner blocked a Dartmouth punt in the second quarter of the Sept. 18 game against the Big Green. The fifth-year senior is one of just 21 players in the nation with a blocked punt over the first three weeks of the season. He became the first Valpo player to block a punt since Laddie Skarecky and Jamari Booker both blocked punts in the same game on Sept. 14, 2019 vs. Central Connecticut.

Among Active Leaders: Combined between his time at Portland State and Valpo, Ben Niesner has punted for 6,949 total yards in his collegiate career. His number ranks ninth among active players in Division-I FCS and 28th among players in all levels of college football. In addition, Niesner ranks 18th nationally in FCS so far this season with 42.6 yards per punt.

Strong Schedule: The Beacons may enter PFL play with an 0-3 mark, but head coach Landon Fox’s team challenged itself in nonconference action. The team’s 28-18 setback vs. Dartmouth in Week 3 was the closest the program has ever come to beating a member of the Ivy League. The Big Green had gone a combined 26-4 over their last three seasons and were the defending Ivy League champions. Prior to hosting Dartmouth, Valpo visited No. 5/4 North Dakota State for the program’s first game against a ranked opponent since 2016. The Bison have won eight of the last 10 FCS national titles. It was the highest ranked team Valpo has ever faced. Valpo’s Week 1 opponent, Indiana Wesleyan, is a quality team and beat No. 6 Olivet Nazarene 52-28 in Week 3.

Scouting the Opponent: Drake has faced nationally-ranked opponents in each of the last two weeks, falling to No. 11 Montana State 45-7 before last week’s 38-0 loss at No. 11 North Dakota. The Bulldogs beat West Virginia Wesleyan 45-3 in Week 1. Drake was projected to finish third in the Pioneer Football League Preseason Poll.

Century Mark: The Beacons had a pair of individuals reach the 100-tackle threshold for their collegiate careers on Sept. 11 at North Dakota State as Kohlton Sherman and Trey Psota both reached that milestone. Sherman’s 10-tackle output elevated the senior’s career accumulation to 106, while Psota had five tackles to boost his career total to 103. Entering Week 4 at Drake, Jaxon Peifer is the team’s active career leader in tackles with 129 followed by Sherman at 109 and Psota at 106.