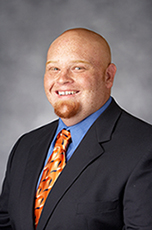 Ed Baker arrived at Valparaiso as a member of the football staff prior to the 2006 campaign and will begin his second season coaching the Crusader tight ends.

He moved into his current role prior to the 2008 season.  In his first two years with the Brown and Gold, Baker was responsible for assisting with the offensive line.  During the 2007 season, Baker helped a right tackle garner First Team All-Pioneer Football League honors.

During his collegiate days, Baker was a four-year player on the offensive line at Adams State College in Colorado from 2002-2005.

Baker earned his associate’s degree from Adams State in 2005 and completed his bachelor’s degree in physical education at Valpo in December, 2007.  He is now currently working towards his master’s degree at Valpo in sports administration.