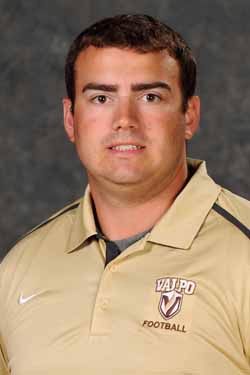 Steve Donovan joined the Valparaiso University coaching staff prior to the 2011 season. He will serve as the defensive line coach.

Prior to joining Valpo, Donovan spent one year coaching the defensive line at his alma matter, Benedictine University, where the Eagles posted an 8-3 overall mark, including a perfect 7-0 record in the Northern Athletics Conference on the way to a league crown.  Benedictine qualified for the NCAA Division III national championships in his one season on the sidelines.

Donovan was a four-year letter winner and a two-year starter for the Eagles.  In his junior and senior season he recorded 85 tackles, including 17 tackles for loss, and had six quarterback sacks, four forced fumbles, and one interception.

A 2010 graduate of Benedictine with a bachelor’s degree in business administration, Donovan had a concentration in management and organizational behavior.  He graduated with a masters of sports administration at Valparaiso University in 2013.