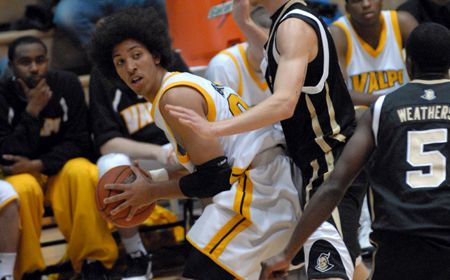 The Matchup: Valparaiso continues Horizon League action tonight, traveling to Milwaukee to take on the Panthers.  The Crusaders enter the game at 1-2 in league play, while Milwaukee sits atop the standings at 4-0.

Series History: The Crusaders maintained an 8-6 lead in the all-time series against the Panthers with a split of their two matchups last year, including a 66-57 victory in their last meeting on Feb. 25, 2008 in Milwaukee.  Valpo held the Panthers to just four first-half field goals in the winning effort.  Brandon McPherson led the Crusaders with 17 points in 30 minutes of action off the bench, including four 3-pointers.  Jarryd Loyd added 12 points, while Shawn Huff scored 11 on 4-of-5 shooting.

Last Time Out: Valparaiso’s second unit sparked a 19-3 run midway through the first half to rally the Crusaders from an early deficit and put them in position for a halftime tie, but #25/RV Butler came out of the break on a 19-4 run and went on to post a 75-62 victory over Valpo Saturday evening at the Athletics-Recreation Center.  Senior guard Brandon McPherson, who had played just three games all season due to injury prior to tonight, led the Crusaders with an inspired effort off the bench, going for 22 points in just 23 minutes of action.  Senior forward Urule Igbavboa added 17 points on 6-of-8 shooting and also grabbed seven rebounds.

Following the Crusaders:  Today’s game can be heard live on the Valpo Sports Radio Network, a four-station entity carrying Crusader athletics all over Northwest Indiana.  Originiating from WVUR, 95.1 FM in Valparaiso, the VSRN also includes WEFM, 95.9 FM, Michigan City; WAKE, 1500 AM, Valparaiso; and WWLO, 89.1 FM, Lowell.  Veteran broadcaster Todd Ickow returns for his 18th season on play-by-play for the Crusaders, while WVUR’s David Schroeder will handle the color commentary.  Live audio will also be available online at www.valpoathletics.com, which will also have links for live stats and video.

Closing Out a Challenging Stretch: Valparaiso’s game against #25/RV Butler on Saturday closed out one of the toughest stretches of games in Crusader basketball history.  The Crusaders played five games in four different locales in a 14-day span, including games against three ranked opponents in #1/1 North  Carolina, #10/15 Purdue and the aforementioned Bulldogs.  Only the 2006-07 squad, which took on #8/9 Marquette, #19/18 Butler and #3/1 Ohio State in a six-day span, faced three ranked opponents closer together.

Key Week: Following tonight’s tilt against Milwaukee, the Crusaders return home to close out three Horizon League games in a six-day period.  Valpo hosts Detroit on Thursday and Wright State on Saturday, a homestand that the Crusaders swept on the final weekend of regular season play last season.

No Drama Here: Very rarely this season have Valpo’s games gone down to the wire.  Last year, 21 of the Crusaders’ 36 contests were decided by single digits, but so far this year, only two of their 14 games have been nine-point spreads or less.  Valpo has not played a single-digit game since its 75-70 overtime loss to La Salle in the Virgin Islands.

Spreading Out the Scoring: The Crusaders have had a variety of different players contribute in the scoring column during the non-league season.  Six different players are averaging between 6.4 and 11.4 points per game for Valpo in its first ten games.  In addition, nine players have also scored in double figures at least once so far this year for Valpo, including four players (Buggs, Fumey, Haskins, Witt) who are in their first season on the court and two more (Little, Rogers) who are in just their second season.

National Audience Awaits Valpo: After appearing on national television seven times during the 2007-08 campaign, Valparaiso will make at least three nationally televised appearances during the 2008-09 season.  On Dec. 20, Valpo was featured on ESPNU in a showdown with top-ranked North Carolina.  The Crusaders’ contest at Purdue Dec. 28 was broadcast on the Big Ten Network, while their Jan. 30 league tilt at Butler will be carried on ESPNU.

Igbavboa Leads the Way: Preseason Second Team All-Horizon League selection Urule Igbavboa has led the way for the Crusaders in the early stages of the 2008-09 campaign, pacing the team in both scoring (11.4 ppg) and rebounding (5.2 rpg).  The senior is just 37 points shy of reaching the 1,000 point milestone for his career and also ranks 12th in program history in rebounding, having surpassed 600 caroms for his career last time out.

McPherson Hits 20+ Again: Senior guard Brandon McPherson reached the 20-point plateau for the sixth time in his career last time out against #25/RV Butler.  After scoring just 16 points combined in his first three games of the season in his return from offseason surgery, McPherson connected on six of ten field goal attempts and knocked down seven free throws for his team-high 22 points.

Next Year’s Newcomers: Valparaiso has signed a quintet of players who will join the program for the 2009-2010 season, four of whom are freshmen and one junior college transfer.  The five newcomers are:
- Ryan Broekhoff, a 6’6” guard from Frankston, Victoria, Australia.  Broekhoff was named Australian Junior National Male Player of the Year earlier this year and was the MVP of the U20 Australian national championship.
- Chris Halvorsen, a 6’8” forward out of Henry Sibley [Minn.] H.S.  Halvorsen helped lead the Warriors to a state championship appearance last year and was selected to the All-Tournament Team.  He also has twice earned All-Conference honors.
- Matt Kenney, a 6’3” guard out of Mooresville [Ind.] H.S.  Kenney was an honorable mention All-State honoree last year, while also earning All-Indianapolis Metro West First Team accolades and All-Conference honors.
- Tommy Kurth, a 6’1” guard out of Penn [Ind.] H.S.  Kurth was also an honorable mention All-State honoree last year and has been ranked as the #54 point guard in the Class of 2009 by ESPN.com.  He has been among the top-25 scorers in the area the last two years.
- Brandon Wood, a 6’3” guard from Kokomo, Ind.  Wood is playing this year at Highland [Ill.] C.C. after playing just six games last year at Southern Illinois.  A former Indiana All-Star, he is projected as the top incoming point guard in the Horizon League next year by Rivals.com.