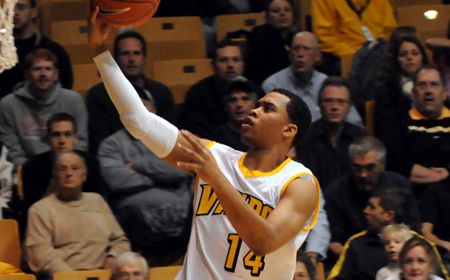 The Matchup: In a fight for seeding heading into the league championship, Valparaiso (14-14, 9-7 Horizon) takes to the court of the ARC for the next-to-last time during the regular season on Wednesday evening as the Crusaders host Loyola (14-11, 5-10 Horizon).  A win would give the Crusaders their greatest number of league victories since joining the Horizon League in 2007-08.

Last Time Out: Valparaiso overcame a five-point deficit in the final two minutes to earn a hard-fought 77-75 victory at Youngstown State Saturday evening.  Brandon Wood scored four straight points after the Crusaders found themselves down 72-67 to bring Valpo back to within one, and then Matt Kenney took over, coming up with a big steal and dunk and then connecting on both ends of a pair of 1-and-1s to secure the win for Valpo.  Kenney posted career highs of 15 points, eight rebounds and five steals to go with five assists Saturday.  Wood led four Crusaders in double figures with 22 points, including 11 straight Valpo points late in the first half to help the Crusaders rally from an 11-point deficit, while Cory Johnson scored 19 and Howard Little added 14 points.  Brandon McPherson handed out eight assists without a turnover as well.

Series History: The Ramblers own a 32-9 advantage in the all-time series over Valpo, but the Crusaders have captured each of the last two outings, including their first win at Loyola in 35 seasons in the last meeting on Jan. 23.  In that outing, freshman Ryan Broekhoff hit six 3-pointers en route to a career-high 20 points as Valpo used a 30-8 run over the final 12 minutes of the first half to roll to an 86-67 victory.  Howard Little picked up his first career double-double with 15 points and 14 rebounds, leading the charge as Valpo owned a 43-23 advantage on the boards.

Following the Crusaders:  Wednesday’s game is available live throughout Chicagoland on Lakeshore Public Television.  As always, it can also be heard live on the Valpo Sports Radio Network (WAKE, 1500 AM, Valparaiso; WEFM, 95.9 FM, Michigan City).  Veteran broadcaster Todd Ickow returns for his 19th season on play-by-play for the Crusaders, while Valpo alumnus Andy Viano will handle the color commentary.  The game can also be seen live online on the Horizon League Network.  Links for the VSRN audio and HLN Video, as well as live statistics, can be found at www.valpoathletics.com.

Take a Look at the Standings: With the Crusaders having just two regular season Horizon League games left, the race for positioning for the Horizon League Championship becomes paramount.  While Valpo still has a mathematical chance at the second seed and the accompanying double bye, it would take an unlikely sequence of events for the Crusaders to move up that far.  The third through sixth seeds all host first round games against the tenth through seventh seeds, respectively.  With a win Wednesday, Valpo would secure a tie for fifth place, but would not yet mathematically clinch a first-round home game, as both Milwaukee and Detroit would still be able to win out and tie the Crusaders, sending it to a tiebreaker for seeding purposes.

Back Home at the ARC: The Crusaders are on pace to again post a stellar home record, a seemingly annual occurence for the men’s basketball program.  Valpo is a stellar 8-2 at the Athletics-Recreation Center this season, with two regular season home games remaining and a likely home contest in the HL Championship.  Over the past 17 seasons, the Crusaders are now 178-39 (.820) at the friendly confines of the ARC.  In addition, Valpo is just two wins shy of its 13th season in the past 17 with double-digit home wins.

League Play = Close Games: Valparaiso’s non-league slate this year featured just two single-digit decisions in 12 games, but once the Crusaders got to league play, the script flipped 180 degrees.  Through 16 league contests, Valpo has faced single-digit games 13 times already, including each of the last seven outings.  This league season has been similar in nature for the Crusaders to the 2007-2008 league campaign, Valpo’s first season as a Horizon League member, when 14 of its 18 games were decided by nine or fewer points.

A New Level of Drama: Of the 13 single-digit games the Crusaders have contested in league play, nine of those games have been within one possession in the final 15 seconds.  And if it seems that recently the games have been more nailbiting than usual, it’s because out of the last seven games, six of them (@UWM, @GB, WSU, UDM, UIC, @YSU) are included among the aforementioned nine.

What a Difference a Year Makes: Just one year ago, the Crusaders closed the year at 9-22 overall and 5-13 in HL play.  This year, however, Valpo has turned things around.  The Crusaders already own 14 wins this year, including nine league victories.  In addition, Valpo has also clinched a higher league finish than last year and is just one win shy of setting a new team high for wins in Horizon League play.

Offense Produces: The Crusader offense has continued to be the key to the team’s resurgence in the win/loss column these past few weeks.  Valpo, which boasts the top scoring offense in the Horizon League at 72.8 PPG, has now scored 70 or more points in each of its last eight games and ten of the last 11 outings after failing to reach the plateau in its first five league games.

Tough Start...: With the Crusaders at the .500 mark , it’s worth noting the struggles Valpo faced early on this season.  The Crusaders took on four teams ranked in the nation’s top-25, all on the road, within the first nine games of the season, part of a stretch that saw Valpo play 10 of its first 13 games away from home.  In addition, Valpo came into the year with the second-least experienced team in the league (based on Ken Pomeroy’s Experience statistic) and features three freshmen and two sophomores within the regular rotation.

McPherson Back on Track: Fifth-year senior guard Brandon McPherson became the 29th player in Crusader basketball history to reach the 1,000 point milestone with a leaner from the baseline midway through the first half in the victory over Cleveland State Jan. 16.  After failing to reach double figures in the seven-game stretch from Concordia through Wright State, McPherson hit double figures in each of the last ten games before failing to reach the mark last time out at Youngstown State.  But even so against the Penguins, he still made a huge contribution, dishing out a Valpo season-best eight assists without committing a turnover in a season-high 34 minutes of action.

One of Valpo’s Best: McPherson is also moving up a number of the Crusader career charts.  Heading into the Loyola game, he is just two games shy of matching and three away from passing Raitis Grafs for the Valpo career games played record.  McPherson is tied for sixth in 3-point percentage (42.3%), eighth in 3-pointers made (157) and 11th in assists (297).  At 1,131 points, he is also just 51 points shy of Valpo’s all-time top 20 in points scored.

Wood Leads the Way: Redshirt sophomore guard Brandon Wood has proven to be among the most prolific scorers the Crusaders have seen in their D-I history, scoring 30 or more points twice already to join Bryce Drew and Dan Oppland as the only players in the last 15 years to score 30 multiple times in a career, including a Valpo D-I record 39 at Georgia Southern earlier this year.  Wood, who currently paces the Horizon League with 18.5 points/game and also ranks among the league’s best in all three shooting categories, also has reached at least 20 points on nine other occasions.  Most recently, he put up double figures for the 11th straight game, pacing the Crusaders with 22 points in their come-from-behind win at Youngstown St.

Johnson Showcases His Versatility: Redshirt junior forward Cory Johnson has made himself known as one of the league’s premier post threats, one of just two league players that rank in the top-ten in both scoring and rebounding.  But Johnson has stepped out behind the arc over the last month and showcased his shooting ability, as after going 0-of-4 over the season’s first 15 games from downtown, he is 16-of-27 from deep over the last 13 contests.  None of his triples were bigger than his third one on Jan. 31 at Green Bay, which gave Valpo the lead for good in the win and capped a 20-point day.  Johnson, who averages 15.2 PPG, scored 19 last time out in Valpo’s win at Youngstown St., including 12 in the first seven minutes of the second half.

Kenney Has Career Day: Freshman guard Matt Kenney had easily his best game in a Crusader uniform last time out at Youngstown St.  Kenney registered career highs of 15 points, eight rebounds and five steals off the bench, while also handing out five assists and committing just one turnover.  He scored six straight points down the stretch for the Crusaders, including both ends of two 1&1s despite entering the final minute at 56.8% from the free throw line on the year.

Quickly: Junior Howard Little scored 14 points on 6-of-7 shooting at YSU, his eighth double-figure game of the season ... Little is now shooting 71.7% from inside the arc in HL play this season ... Johnson, Kenney, Little and McPherson all played season-high minutes at YSU, while Michael Rogers played a season-low six minutes ... Valpo connected on ten 3-pointers at YSU, its seventh game in double figures on trifectas this year ...  the Crusaders committed just nine turnovers, its sixth game in single digits this year ... Valpo’s 21 assists were fourth-most in a single game this season ...  Valpo committed no turnovers in the second half at YSU after nine first-half miscues ... Valpo has started the same lineup in each of the last 12 games.