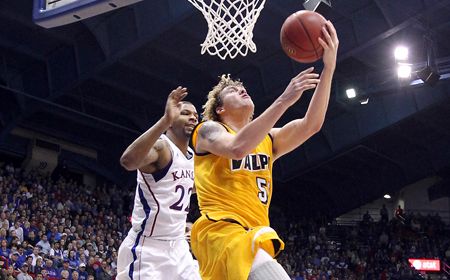 Shooting 27.4% from the floor proved to be too much for Valparaiso to overcome Monday night, as the Crusaders fell 79-44 to #7/6 Kansas at Allen Fieldhouse in Lawrence, Kan.

“We’re disappointed that we didn’t play better tonight,” said Crusader head coach Homer Drew.  “I think you have to complement KU – their speed really hurt us in transition early.  They jumped on us early with their speed and the physicality inside on their offensive boards.  Once we were able to kind of negate that, we got it down to six points and I thought that if we could continue that tempo that would make a huge difference.  Next thing I know, we were down by 20.”

The Crusaders hung with the Jayhawks in the early going despite a 9-2 Kansas spurt, cutting the deficit to three points at 10-7 at the 14:42 mark on a layup by Brandon Wood (Kokomo, Ind./Kokomo [Highland C.C./Southern Illinois]).  Wood then answered a Marcus Morris jumper with a jumper of his own, and following another basket by Morris, Howard Little (Chicago, Ill./Stoneridge [Calif.] School) converted a layup to keep Valpo within 14-11 with 12:33 to play in the opening half.

Kansas reeled off seven straight points over the next 1:30 to push its lead into double figures for the first time, but a 3-pointer by Ryan Broekhoff (Frankston, Victoria, Australia/Australian Institute of Sport) slowed the Jayhawk momentum and brought the Crusaders back within seven.  Cory Johnson (Duluth, Minn./Duluth East [Iowa State]) answered a Thomas Robinson layup with a layup of his own to make it 23-16 with 10:08 to go in the first half, and a Johnson free throw 30 seconds later cut the lead to six points.

But Johnson's layup was the last field goal for the Crusaders for an eight-minute stretch, while Kansas went on an 18-4 run during part of that time period to extend the lead out to 20 points.  Kevin Van Wijk (Hoofddorp, Netherlands/Katholieke Scholengemeenschap Hoofddorp) connected on four free throws for Valpo's only points during the run.  Jay Harris (Aurora, Ill./Oswego East) eventually hit a triple to snap the Crusaders' drought from the field with 2:08 to go in the first half, and Valpo would go into the locker room trailing 44-27.

Wood answered a Marcus Morris putback with a layup to start the second half to keep the deficit at 17, but Kansas scored the next seven points to push its advantage to 53-29 with 17:11 remaining.  The margin would remain between 20 and 24 points over the next eight minutes, as Valpo's defense held Kansas to just 10 points over that stretch.  But the Crusaders' offense could only score 13 points over that same time span, and after a Harris layup made it 63-42 with 9:17 left, Valpo would hit just one shot the rest of the way as the Jayhawks extended their lead to the final margin.

Johnson and Van Wijk each scored 10 points to lead the Crusaders on Monday, the latter posting the first double-figure effort of his career in his second game in a Valpo uniform.  Johnson also tied with Wood for team-high honors in the rebounding department, as each pulled down seven boards.  Wood handed out four assists as well.  As a team, the Crusaders connected on just 17-of-62 (27.4%) from the floor, 2-of-19 (10.5%) from behind the arc and 8-of-16 (50%) from the foul line.

“Their quickness made us play a little faster than we’re used to,” said Drew.  “We’re still learning as a team so it’s going to help us for the future; but I thought those were the two big keys and we missed a lot of shots.  To shoot 10 percent from the three-point line is not a typical shooting night for our basketball team.”

Kansas (2-0) was led by the Morris twins, as each posted a double-double.  Marcus Morris hit 10-of-12 from the field en route to 22 points and 11 rebounds, while Markieff Morris had a double-double in the second half alone and finished with 12 points and 13 rebounds.  Tyrel Reed finished with 11 points as well, as the Jayhawks shot 53.4% (31-of-58) from the floor for the game.

Valparaiso (1-1) looks to get back on the winning track Thursday evening as the Crusaders return home to host Purdue North Central.  Tipoff is slated for 7:05 p.m., and as always, all the action can be heard live on the Valpo Sports Radio Network (WAKE, 1500 AM, Valparaiso; WEFM, 95.9 FM, Michigan City; WJOB, 1230 AM, Hammond) and online at www.valpoathletics.com.  The official Crusader website will also have a link to live video through the Horizon League Network, as well as live stats.