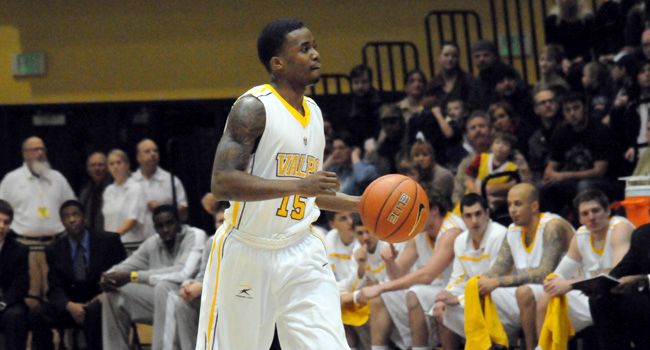 After leading for most of the game, Valparaiso reclaimed a one-point advantage with 1:25 to go, only to see Milwaukee’s Kaylon Williams rattle home a 3-pointer on the next trip to give the Panthers the lead for good, as the Crusaders fell Thursday evening, 57-55, at the Athletics-Recreation Center.

In a tight battle that saw neither team gain more than a six-point advantage in the final 30 minutes, it was Valpo with a five-point lead with 9:31 to go, as junior Matt Kenney (Mooresville, Ind./Mooresville) converted a fast-break layup while being fouled and junior Ryan Broekhoff (Frankston, Victoria, Australia/Australian Institute of Sport) then tipped in Kenney’s missed freebie to put the Crusaders up 40-35.  But the Panthers rolled off a 12-2 run over the next 3:30, including a pair of 3-pointers by Tony Meier, to turn the score in their favor by a 47-42 count with under six minutes to play.

A pair of free throws by Broekhoff with 5:32 to go helped end the Panthers’ run, as the Crusaders wouldn’t let UWM push ahead any farther.  Then, down 50-46 with under four minutes to play, Broekhoff and junior Kevin Van Wijk (Hoofddorp, Netherlands/Katholieke Scholengemeenschap Hoofddorp) hit the boards to help bring the Crusaders even closer.  Van Wijk rebounded a missed 3-pointer and got fouled on his putback attempt, hitting the first free throw.  Then, after Van Wijk missed the second, it was again Broekhoff nabbing the miss, this time landing and knocking down a short jumper to bring Valpo to within 50-49 with 3:32 left.

Kaylon Williams split a pair of free throws on Milwaukee’s next trip and rebounded a Crusader miss on the other end, but Van Wijk came up with a big play, tipping the ball away from Williams on the fast break, where it was corralled by Broekhoff, who found Kenney for a fast-break layup to tie the game at 51 with 2:38 to play.  After the teams traded empty trips, Ryan Allen split a pair from the foul line to put the Panthers ahead 52-51 with 1:38 to go.

Valpo got the ball down low to Van Wijk on its next possession, where he was fouled.  The junior calmly drained both attempts from the stripe with 1:25 to play to push Valpo in front, 53-52.  The Crusaders then forced a miss from inside by the Panthers, but the rebound pin-balled around on the court until Williams corralled it and called timeout.  Out of the stoppage, Williams let fly from beyond the 3-point line on the left wing, a shot that bounced and spun around on the rim before finally rattling home with 46 seconds to play to put UWM in front by two.

The Crusaders again went inside to Van Wijk to try to tie it, but his effort was off the mark, and the Crusaders were forced to foul, as Allen hit two for the Panthers to make it 57-53 with 32 seconds remaining.  Valpo had three shots from long distance in its last effort, but none of them fell, as a consolation layup at the buzzer by Broekhoff accounted for the final margin.

“I think there were two big keys tonight,” said Crusader head coach Bryce Drew.  “Obviously, [Williams’] big 3-pointer at the end that rolled around and went in was a big play.  Then, the other big thing is our shooting.  Going 1-of-17 on 3-pointers and 10-of-17 from the free throw line really hurt us, and unfortunately it happened tonight in a tight game.”

It was Van Wijk and redshirt junior Erik Buggs (Memphis, Tenn./Mitchell) who got the job done early Thursday for Valpo, as the duo combined for the Crusaders’ first 14 points over the opening eight minutes as they claimed a quick 14-7 advantage.  Milwaukee countered with nine straight points to claim the lead, but a 10-3 spurt a couple minutes later, including three baskets by junior Richie Edwards (Lakeland, Fla./Lakeland [Hillsborough C.C.]), put Valpo back on top 26-20 with 4:22 to go in the first half.

The Crusaders scored just two points the remainder of the half, however, as the Panthers closed to within 28-27 at the break.  Valpo’s defense would help keep it on top early in the second half, as it took Milwaukee six minutes to score to open the final period.  But offensively, the Crusaders mustered just a Van Wijk free throw and a Broekhoff 3-pointer over the same stretch, as they held on to a narrow lead for the opening 10 minutes of the second half.

Broekhoff paced all players on Thursday with 18 points and 12 rebounds, his seventh double-double of the year.  Van Wijk added 15 points and three steals, while Buggs reached double figures for just the second time this season with 12 points to go with four assists.  Kenney added nine rebounds as well as Valpo out-rebounded Milwaukee 39-36.  The Crusaders were able to shoot just 1-of-17 (5.9%) from the 3-point line and 10-of-17 (58.8%) from the foul line on the evening.

“We knew coming into tonight that it would be a very physical game,” said Drew.  “It’s a credit to our guys that we were able to out-rebound a very physical Milwaukee team.”

Meier led Milwaukee (10-4, 3-0 Horizon) with 17 points off the bench, hitting five of his eight 3-point attempts.  James Haarsma chipped in 12 points, and Williams approached a triple-double for the visitors with 10 points, nine rebounds and seven assists.  The Panthers actually shot slightly worse from the floor and the free throw line than the Crusaders, but took advantage of Meier’s hot hand to hit eight 3-pointers.

Valparaiso (8-6, 1-1 Horizon) looks to rebound with a matinee on New  Year’s Eve, as the Crusaders host Green Bay at 4:05 p.m. on Saturday afternoon.  As always, all of the action can be heard live on the Valpo Sports Radio Network and seen online on the Horizon League Network.  Links to both the audio and video webcasts, as well as live stats and the Valpo Gameday page, will be available at www.valpoathletics.com.