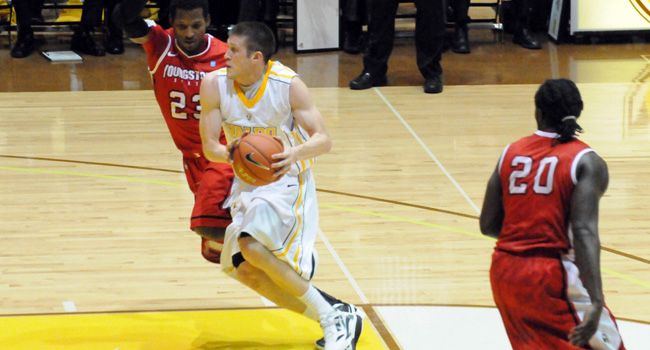 Valparaiso led nearly from start to finish, placing four players in double figures in the scoring column as the Crusaders captured their third straight victory with a 69-48 triumph over Loyola Thursday evening in Chicago, Ill.

Sophomore Jay Harris (Aurora, Ill./Oswego East) led the charge with an 18-point effort off the bench, connecting on 7-of-10 from the field, including a quartet of 3-pointers.  The second-year guard also tied for team-high honors with five assists.  Junior Ben Boggs (Roanoke, Va./Hidden Valley [Virginia Tech]) ended the night with a career-best 14 points, 11 of which came in the first half, as he knocked down all three of his 3-point attempts en route to a 5-of-6 shooting performance.

“I’m very proud of our guys tonight; we really played well as a team,” said Crusader head coach Bryce Drew.  “Ben got us off to a great start tonight, hitting shots early.  I thought Ryan did an excellent job defensively on our double teams as well.  Then, when Loyola started making runs, Jay seemed like he always had a shot to end the run.”

After surrendering the game’s first basket, Valpo scored the next eight points to take the lead for good.  Broekhoff got it going with a fast-break layup off a feed from redshirt junior Erik Buggs (Memphis, Tenn./Mitchell), and Boggs followed with a triple and then an old-fashioned 3-point play to quickly make it 8-2 Crusaders just 2:44 into the game.

Loyola would cut the Crusader lead to two points on a pair of occasions, the second coming at 10-8 with 14:34 to play in the half, but a 3-point barrage gave Valpo breathing room it wouldn’t relinquish for the rest of the contest.  Harris set up Broekhoff and Boggs for triples on back-to-back possessions, and then the next trip stepped up and knocked down a 3-pointer of his own, pushing the advantage to 19-10 less than eight minutes into the contest.

The next decisive run would come thanks to the inside game, as the Crusaders used a quartet of buckets in the paint to move the lead into double figures for good.  Leading by six, redshirt junior Will Bogan (Boise, Idaho/Vallivue [Ole Miss]) found Van Wijk inside on the fast break for a layup, and then Buggs took a rebound and went coast-to-coast for a driving basket to make it 27-17 Valpo with 6:16 left in the half.

A minute later, Broekhoff followed his own 3-point miss and made a circus layup to continue the Crusaders’ spurt.  Valpo would cap the 8-0 run with another layup from Van Wijk off a pass from Harris, going up 31-17 with 3:19 to go in the opening stanza.  Then, holding the ball for the last shot of the half, the Crusaders perfectly executed a set play, culminating in a Harris 3-pointer to make it a 38-22 lead at the break.

Valpo quickly snuffed out any thoughts Loyola would have of a rally in the second half, as Van Wijk and Broekhoff combined for the first six points of the half to make it a 22-point lead.  The Ramblers would get back to within 18 at the midway point of the second half, but back-to-back 3-pointers by Boggs and Harris were part of a 10-2 Crusader run that salted the game away for good.

The Crusaders enjoyed yet another stellar shooting performance from the floor on Thursday, hitting 56.9% (29-of-51) overall, including 42.1% (8-of-19) from behind the 3-point line.  Valpo, which out-rebounded Loyola 35-22, got at least 17 minutes from eight different players, while no Crusader had to play more than 29 minutes.

Loyola (5-13, 0-8 Horizon) was paced by 13 points from Jordan Hicks and 11 points by Christian Thomas.  Ben Averkamp pulled down a game-high nine rebounds.

Valparaiso (13-7, 6-2 Horizon) looks for its fourth consecutive win on Saturday afternoon, once again traveling to Chicago, this time to face off against UIC at 3 p.m.  As always, all the action can be heard live on the Valpo Sports Radio Network and seen online on the Horizon League Network, while Saturday’s game can also be seen locally on Comcast SportsNet Chicago.  Links to both the audio and video webcasts, as well as live stats, will be available at www.valpoathletics.com.