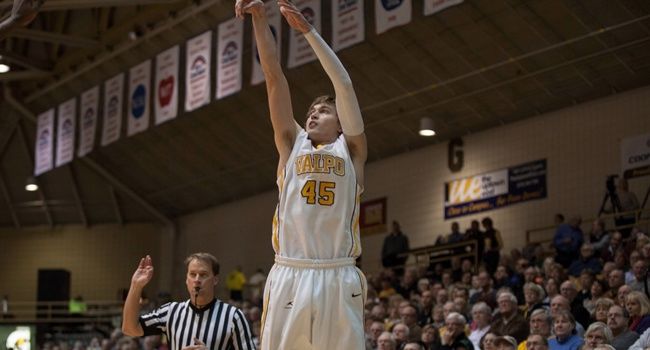 In a game of runs Wednesday night in Chicago, Ill., it was Valparaiso which came up with the biggest spurt, scoring six straight points in a 90-second stretch late to take a six-point lead, enough to propel the Crusaders to a 75-70 victory over UIC.

“We knew coming in how strong a team UIC was – they’ve had some very impressive wins this year, and we knew we would have to play very well to come out with a win,” said Crusader head coach Bryce Drew.  “It was a very back-and-forth game, with both teams making runs.  We were fortunate to make our run in the final minutes which allowed us to have the lead going into the final stretch.”

Valpo actually scored on six straight possessions in the closing stages of the game, starting off as junior LaVonte Dority (Chicago, Ill./Foreman [USF]) fed redshirt junior Bobby Capobianco (Loveland, Ohio/Loveland [Indiana]) inside for a layup to cut the Flames’ advantage to 56-55 with 3:56 to play.  Capobianco then grabbed a defensive rebound on the other end and started a fast break, one which resulted in senior Matt Kenney (Mooresville, Ind./Mooresvile) hitting fellow senior Ryan Broekhoff (Frankston, Victoria, Australia/Australian Institute of Sport) for an open 3-pointer to give the Crusaders a two-point lead with 3:28 left.

UIC connected on a pair of free throws on their next possession, but Valpo moved ahead by three when Dority canned a 3-pointer of his own on the Crusaders’ next trip.  Again the Flames would tie it on an old-fashioned 3-point play by Josh Crittle with 2:34 to play, only for Broekhoff to respond with a tough jumper from the top of the key, giving the Crusaders a 63-61 lead with 2:23 remaining.

Broekhoff grabbed the board following a Crittle miss on the defensive end, and the Crusaders would run down the shot clock nearly to zero before Dority made the biggest play of the night to that point, converting a scoop shot in the lane while being fouled with 90 seconds to play to push the lead to four points.  Dority would miss the free throw, but after a UIC missed 3-pointer, it was senior Kevin Van Wijk (Hoofddorp, Netherlands/Katholieke Scholengemeenschap Hoofddorp) making the tough shot in the lane, ending the spurt of six straight points and making it 67-61 Valpo with 54 seconds remaining.

Following a pair of free throws for the Flames, the Crusaders committed a turnover on the inbounds pass, but got the ball back when fifth-year senior Erik Buggs (Memphis, Tenn./Mitchell) hounded Gary Talton into traveling with 27 seconds to play.  Broekhoff then hit senior Ben Boggs (Roanoke, Va./Hidden Valley [Virginia Tech]) on an over-the-top pass on the ensuing inbound to push the lead back to six points.

UIC would cut the lead to four twice in the waning seconds, but first fifth-year senior Will Bogan (Boise, Idaho/Vallivue [Ole Miss]) and then Kenney hit pairs of free throws to keep the Flames at bay.  UIC actually made it a one-possession game with less than two seconds to go on a Talton 3-pointer, but Kenney drilled his last two attempts from the charity stripe to close out the scoring.

The game of runs started right away, as UIC scored the game’s first five points as the Crusaders missed their first five field goal attempts.  A Broekhoff 3-pointer on an inbounds play finally got Valpo on the board, and the Crusaders would score 12 straight points to claim their largest lead of the game at 12-5, as five different players scored.

Valpo would never trail again in the opening 20 minutes, twice later in the frame pushing the lead back up to six points, but each time UIC fought back.  It looked like the game would go into the half knotted at 30-all, but off a broken play, Buggs hit Broekhoff for a 3-pointer with one second on the clock to give the Crusaders a 33-30 lead into the break.

With UIC possessing the ball out of halftime, Buggs swooped in to steal the inbounds pass and took it to the rim, pushing the advantage to 35-30.  But the Flames scored 13 points on their next five possessions while holding the Crusaders scoreless, going ahead 43-35 with 16 minutes to play.

The UIC lead would reach nine points at 46-37 before Valpo scored nine straight to tie the game yet again.  Broekhoff had four points during the run, which Dority capped with a 3-pointer to make it 46-all with 13:04 remaining.  Neither team could gain more than a three-point edge over the next few minutes as the game approached critical mass.

“Ben is a tough kid – his toe’s been bothering him, but has been a bit better the last couple days,” said Drew.  “His energy and defense when we needed it in the second half, after not playing the first half, really helped turn momentum back our way.”

Broekhoff led the way with his second consecutive double-double, finishing the night with 21 points and 10 rebounds.  Dority added 18 points, including three second-half 3-pointers, and matched his season high with four assists in front of his hometown crowd.  Van Wijk scored 16 as well, 14 of which came in the first half to help the Crusaders to the three-point halftime lead.  Valpo shot 50% (22-of-44) for the game and was 25-of-30 (83.3%) at the foul line, led by an 8-for-8 effort from Van Wijk.

“I think it did give LaVonte a bit of an extra boost tonight, playing in his home city,” said Drew.  “He’s put in a lot of work in the year he sat out to get better, and it was nice to see that hard work paying off tonight in front of his family and friends.”

Talton led UIC (10-6, 1-2 Horizon) with 25 points, going 11-of-11 from the foul line.  Crittle scored 16 points for the Flames, 12 of which came in the second half, while Hayden Humes added 12 points as well.  Daniel Barnes grabbed eight rebounds and came up with eight steals as well.