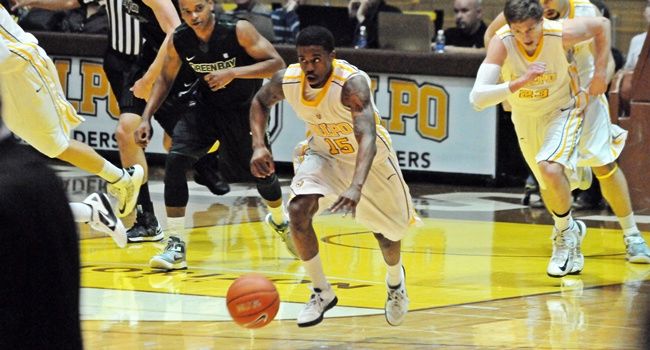 The Valparaiso men’s basketball team never flinched down the stretch as Green Bay made a run, getting a key 3-pointer from Ryan Broekhoff (Frankston, Victoria, Australia/Australian Institute of Sport) with under two minutes to play and hitting free throws down the stretch to remain in first place with a 73-61 victory over the Phoenix at the ARC Wednesday evening.  With the win, the Crusaders have won six straight league games for the first time in nine years.

“Green Bay was one of the hottest teams in the league coming into tonight, really playing well,” said Crusader head coach Bryce Drew.  “I thought our guys came out with a lot of energy to take a big lead early on, but give credit to Green Bay – they hit some shots and made some stops to get back into the game.  I’m proud of our team in the second half – there were times that Green Bay could have taken momentum, and it seemed like every time we had guys there making a shot or making a play to keep the momentum on our side.”

Valpo’s lead in the second half peaked at ten points, as a triple from senior Matt Kenney (Mooresville, Ind./Mooresville) put the Crusaders ahead 58-48 with 6:17 to play.  That would be Valpo’s last field goal for four and a half minutes, during which time Green Bay put together a 10-3 run to close back within three points.  Daniel Turner had a 3-pointer and a layup for the Phoenix during their spurt, while Jordan Fouse capped the run with a putback with two minutes to play.

Broekhoff, who was just 1-of-6 from the floor at this point, stepped up and hit the big shot down the stretch yet again, nailing a stepback 3-pointer with 1:40 remaining to push the Crusader edge to 64-58.  After a Phoenix miss, Kenney split a pair of free throws to make it a seven-point lead, and fifth-year senior Erik Buggs (Memphis, Tenn./Mitchell) made the heads-up play of the night, stealing Green Bay’s inbound pass as it was attempting to roll the ball up the floor with a minute to play.

Buggs would get the ball to fifth-year senior Will Bogan (Boise, Idaho/Vallivue [Ole Miss]), who sank both of his free throw attempts to make it a nine-point game.  Broekhoff, Bogan and Kenney all were perfect on their final trips to the charity stripe in the last 50 seconds, while Green Bay would add just a Cole Stefan 3-pointer to its side of the ledger before the final horn.

It was all Buggs early on, as the Memphis native had seven points, an assist and three steals before the game even reached the first media timeout.  Buggs canned a 3-pointer on Valpo’s first possession, just his third 3-point make of the season, and followed with a defensive steal and fast-break layup to make it a quick 5-0 lead.  The senior used his other two early steals to finish a fast break on his own and hit Kenney for a fast-break layup as Valpo led 9-2 early.

The Crusaders kept pushing the lead, with triples on consecutive possessions from junior Jordan Coleman (North Hollywood, Calif./Calabasas [Southwestern Ill. College/Hawai’i]) and redshirt junior Bobby Capobianco (Loveland, Ohio/Loveland [Indiana]) followed by a layup from junior LaVonte Dority (Chicago, Ill./Foreman [USF]) making it a double-digit game at 17-7 with 12:23 left in the first half.  Later, Buggs found Bogan for an open 3-pointer and then hit Capobianco for an inside basket as the Crusader lead peaked at 25-9 just over 11 minutes into the game.

But Green Bay used a pair of runs to get back into the contest.  The Phoenix scored eight straight, capped by a fast-break dunk from Keifer Sykes, to move to within 27-19 with 5:40 to go in the opening period.  Then, after Valpo had scored the next three, Green Bay rattled off ten consecutive points, seven of which came from Alec Brown, to make it a one-point game.  The Crusaders eventually took a 34-31 lead into the locker room.

Senior Kevin Van Wijk (Hoofddorp, Netherlands/Katholieke Scholengemeenschap Hoofddorp), who had been held scoreless in the first half, was the Crusaders’ offensive catalyst early in the second half, scoring Valpo’s first seven points of the final 20 minutes.  Two more Van Wijk baskets made it an eight-point lead at the 11:08 mark, and a circus 3-point play from Broekhoff with 7:04 to play pushed the lead to 55-46 and set the stage for Kenney’s triple.

Despite shooting just 2-of-7 from the field, Broekhoff ended the night with a game-high 19 points, utilizing a 14-of-15 performance on the foul line.  Van Wijk scored 12 points, all of which came in the second half, while Kenney was the third Crusader in double figures with 10 points.  Both Broekhoff and Kenney ended up just one rebound shy of a double-double, tying for game-high honors with nine caroms.

Green Bay (10-10, 4-3 Horizon) was led by 18 points from Brown, 15 from Sykes and 12 off the bench by Brennan Cougill.  Fouse led the Phoenix with nine rebounds, while Stefan racked up four steals on the evening.

Valparaiso (16-5, 6-1 Horizon) has a week until its next game, closing out the first half of the league slate with a trip to Youngstown State next Wednesday, January 30.  The game is slated for a 6:05 p.m. CT tip and will be broadcast live exclusively at ESPN3.com.  As always, the game can be heard on the Valpo Sports Radio Network as well.