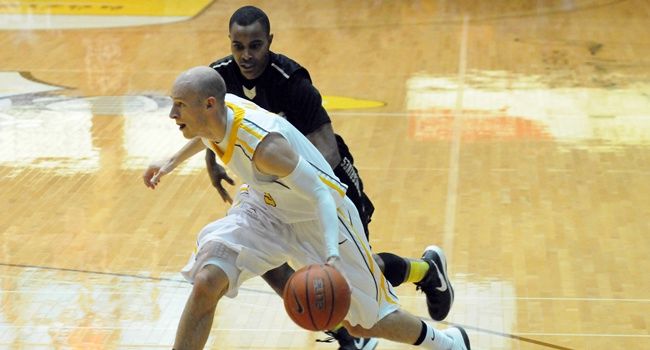 The Valparaiso men’s basketball team scored the first 12 points of Saturday afternoon’s Horizon League game at Cleveland State, and its lead never dropped under six points as the Crusaders defeated the Vikings, 80-72, in front of a national television audience on ESPN2.

“As a coach, I’ve been very blessed to be coaching a great group of guys,” said Crusader head coach Bryce Drew.  “Our seniors really responded tonight, and the rest of the team followed them.  We’ve had a few sicknesses and injuries, and a lot of those guys battled through adversity tonight, and I’m really proud of how they responded.”

The Crusaders got it going on Saturday with a steal and breakaway slam dunk by senior Ryan Broekhoff (Frankston, Victoria, Australia/Australian Institute of Sport) just 37 seconds into the game.  On the next trip, senior Ben Boggs (Roanoke, Va./Hidden Valley [Virginia Tech]) knocked down a mid-range jumper, and then two possessions later nailed a 3-pointer from the corner to quickly make it 7-0.

Valpo kept it rolling after a Boggs steal, as fifth-year senior Erik Buggs (Memphis, Tenn./Mitchell) found fellow fifth-year senior Will Bogan (Boise, Idaho/Vallivue [Ole Miss]) for another 3-pointer as the Crusaders led by double digits just 3:24 into the game, forcing a CSU timeout.  Redshirt junior Bobby Capobianco (Loveland, Ohio/Loveland [Indiana]) closed out the opening run with a basket just over five minutes in, as Cleveland State would not score until a Bryn Forbes jumper with 14:19 left in the opening period.

“The players were really excited to start the game,” said Drew.  “They know how good Cleveland State is, and I think being on television was even some more motivation.  We came out with a lot of energy and got some stops early that enabled us to get out in transition.”

As the first half approached the midway point, the Vikings sliced a 12-point deficit in half with two 3-pointers in a three-possession span, as Forbes’ triple made it 20-14 Valpo with 9:44 left in the first half.  But the Crusaders responded with a 13-1 run.  Bogan got inside for a layup and also hit his second 3-pointer of the game during the spurt, while Broekhoff closed it out with four consecutive points as Valpo led 33-15 with 6:30 left in the stanza.  CSU closed to within 41-30 with two minutes to play in the half, but Capobianco scored the last three points of the opening 20 minutes to give Valpo a 44-30 lead into the locker room.

The lead remained around the mid-teens for the opening 10 minutes of the second half, until CSU put together a 9-0 run to close to within 55-47 with 9:35 to play.  But every time the Vikings moved within single digits, Valpo was there with an answer.  Four straight times, the Crusaders responded immediately – senior Matt Kenney (Mooresville, Ind./Mooresville) got inside on an inbounds play for a layup, Buggs drove the lane for a basket, Broekhoff connected on a 3-pointer from straight on and Boggs finished off a press break with a bucker off a feed from Buggs.

Down the stretch, the Crusaders basically traded baskets with the Vikings, keeping their lead right around the 10-point mark.  Both Bogan and Broekhoff knocked down 3-pointers to stave off any hope of a CSU run, while Valpo made 6-of-8 free throws in the final 2:30 to secure the victory.

A balanced offensive effort saw five Valpo players finish the game in double figures, led by 15 from Broekhoff, who also tallied four steals on the game.  Van Wijk went 4-of-5 from the floor and 6-of-8 from the foul line for 14 points, while Capobianco scored 13 in just 13 minutes off the bench.  Bogan and Buggs each added 11 points apiece, while the latter also handed out eight assists, his second-highest output of the season.  The Crusaders shot 55.1% (27-of-49) from the floor, their third straight game over 50% from the field.

Cleveland State (12-13, 4-7 Horizon) received a game-high 24 points from Forbes, while Marlin Mason scored 16 off the bench as well, but they were the only two Vikings in double figures.  The Crusaders forced 17 CSU turnovers which they turned into 27 points, while the Vikings did post 19 second-chance points on 14 offensive boards.

Valparaiso (19-6, 9-2 Horizon) looks for another 20-win season and, more importantly, the chance to maintain its spot atop the league standings with a quick turnaround for another road game, as the Crusaders head to Wright State Tuesday evening at 6 p.m. CT.  As always, the game can be heard live on the Valpo Sports Radio Network and seen live on the Horizon League Network, with links to live audio, video and stats available through ValpoAthletics.com.