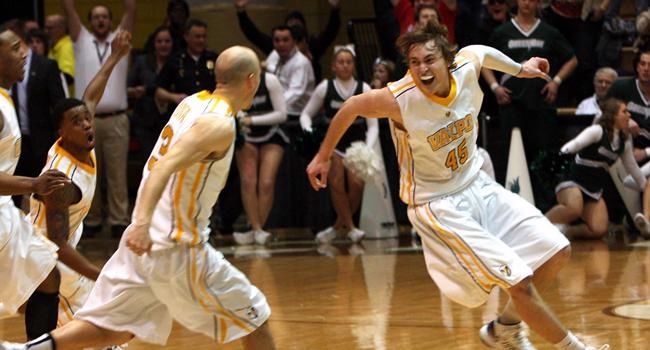 Senior Ryan Broekhoff (Frankston, Victoria, Australia/Australian Institute of Sport) drained a 3-pointer from the right wing with a hand in his face as time expired Saturday night, lifting top-seeded Valparaiso to a 70-69 victory over fourth-seeded Green Bay at the ARC in the second semifinal of the Horizon League Championship.  The win sends the Crusaders to the title game at 8 p.m. Tuesday at the ARC against third-seeded Wright State.

Broekhoff got the opportunity to hit the game-winner after senior Kevin Van Wijk (Hoofddorp, Netherlands/Katholieke Scholengemeenschap Hoofddorp) grabbed a rebound off a free throw miss by Alec Brown with 6.3 seconds to play and the Crusaders trailing 69-67.  Van Wijk quickly gave the ball to Broekhoff, who brought the ball up himself with time ticking away.  Broekhoff’s attempt to penetrate the lane was denied, and the senior dribbled over to the right wing, where Brennan Cougill switched onto him.  Broekhoff squared himself as he rose above the 6’9” Cougill and released, falling backwards as the shot swished through and sent the ARC into hysterics.

“At first, I was trying to get to the rim,” said Broekhoff.  “I kind of fumbled it a little bit. Cougill was on me, and I just kind of flung it up and hoped and prayed.  I never expected it to go in.  It felt terrible coming out of the hands.  I’m just so thankful that it went in.  It’s been an unbelievable year, and we are not done yet. We’ve still got one more game on Tuesday that we need to turn out attention to now.”

“This is one of the best (shots) or maybe the best I have seen,” said Drew on the final shot.  “I was right in front of it. He lost the ball and then he had a (6-9) player right in his face. I thought it was going to get blocked. He got it over the top of him. It went straight through. Hundreds of games in the NBA I sat on the bench, and this is comparable to any buzzer-beater I’ve seen.”

Broekhoff hit an earlier 3-pointer with 1:14 to play which tied the game at 64-all after the Crusaders had trailed for the previous seven-plus minutes.  After running the shot clock down, the Phoenix got a turnaround jumper from Cougill with 39 seconds to play to make it 66-64 Green Bay, and following a Crusader miss, Keifer Sykes knocked down two free throws with 13 seconds left.  But senior Matt Kenney (Mooresville, Ind./Mooresville) drained a 3-pointer to with seven seconds remaining, bringing Valpo back within 68-67, and after the Crusaders fouled Brown, he hit the first before missing the second to set up the final sequence.

Broekhoff and Van Wijk combined to get the Crusaders out to a quick start on Saturday, scoring all of Valpo’s first 11 points as it led 11-2 less than four minutes into the ballgame.  Valpo maintained the lead throughout much of the first half before suffering a scoring drought, as Green Bay put together a 9-0 run over a span of more than five minutes to turn a 20-13 game into a 22-20 Phoenix lead.

But the pair of All-League seniors made a pair of big plays late in the first half to give the Crusaders the lead into the locker room.  First it was Van Wijk finishing through contact inside after returning from an injury and completing the old-fashioned 3-point play to make it 25-24 Valpo with 1:34 left in the half.  Then Broekhoff stepped up and hit a 3-pointer while being fouled, following with the free throw to make it a 29-24 Crusader advantage at halftime.

Fifth-year senior Erik Buggs (Memphis, Tenn./Mitchell) was the catalyst for the Crusader offense early in the second half, driving for a pair of layups and also getting a putback off an offensive board in the first 2:22 of the period, and then Kenney connected from distance to give Valpo its largest lead at 38-28 with 16:12 to play.  Green Bay closed within one with an 11-3 run over the next four minutes, but Van Wijk scored four straight to push the lead back out to 47-42.

But the Phoenix would rally behind the play of Sykes.  The sophomore hit a pair of 3-pointers and also scored three the hard way as part of a 13-2 Green Bay spurt which gave the Phoenix a 55-49 lead with 7:36 to go.  Broekhoff ended the run with a 3-pointer of his own, but every time the Crusaders closed within one possession, Sykes seemingly had an answer, hitting first a 3-pointer and then a mid-range jumper, the latter making it 62-58 Green Bay with 2:42 left.  Valpo would knock down 3-of-4 from the foul line on its next two trips to close within one, before a jumper from Alec Brown made it a three-point game and set the stage for the closing 90 seconds.

Broekhoff ended the night with 25 points, including five 3-pointers, to lead the Crusader effort on Saturday night as they advanced to the league title game.  The win also marked the 25th this season by Valpo, matching the program record for victories in a single season.  Van Wijk added 17 points, while Kenney scored 14 as well.  Kenney also had a team-high five assists, while Broekhoff and Buggs tied for team-high honors with six rebounds.

Valparaiso (25-7) will host the Horizon League Championship title game for the second straight year on Tuesday, hosting Wright State, which downed Detroit on a buzzer-beater of its own earlier in the day.  Tip-off is slated for 8 p.m. from the ARC, broadcast live on ESPN with Bob Wischusen and Stephen Bardo on the call.  It will also be broadcast live on the Valpo Sports Radio Network as well.  Links for the live video and audio, as well as live stats, will be available at ValpoAthletics.com, while ValpoGameday.com will be open as well.