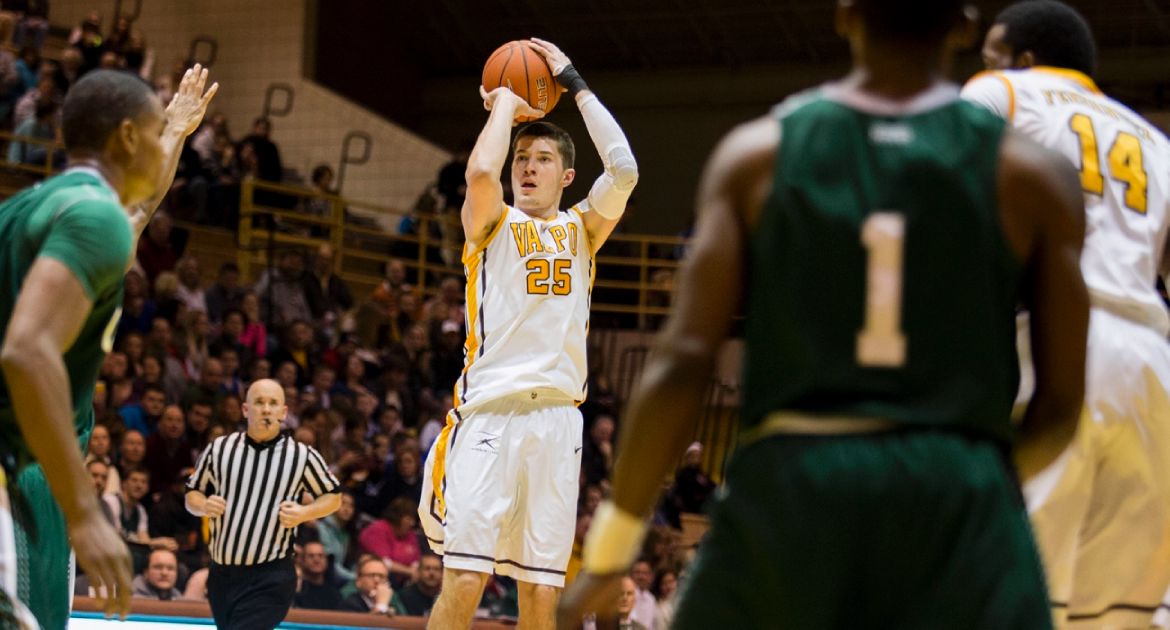 A battle in an atmosphere that felt like March between Valparaiso and Cleveland State Saturday night at the ARC went right down to the wire, with the Crusaders eventually pulling out a 58-56 win over the Vikings to improve to 3-1 in Horizon League play.  Valpo is now 16-3 overall and is one of just two teams in the nation, along with Gonzaga, to own 16 victories.

The Crusaders trailed by three points with 2:27 to play following a deep jumper by CSU’s Anton Grady, but sophomore Alec Peters (Washington, Ill./Washington) was fouled on a 3-point attempt on the ensuing possession, hitting all three free throws to knot the game at 54-54.  Then, senior Vashil Fernandez (Kingston, Jamaica/Princeton Day [Md.] Academy) came up with a pair of big plays, first blocking a layup by Charlie Lee on the defensive end and then converting a short jumper in the paint with 1:42 to go to make it 56-54 Valpo.

The Vikings split a pair of free throws on their next trip, and following a Crusader miss, had a chance to take the lead, but a 3-pointer was off the mark and the ball went out to Valpo with 16.8 seconds to play.  With CSU pressing, the Crusaders ran to perfection a pass over the top, as Peters hit freshman Tevonn Walker (Montreal, Quebec/Vanier College) in stride behind the defense.  Walker finished at the rim while being fouled with 14.7 seconds remaining, pushing the Valpo lead to 58-55.

Walker would miss the free throw, giving the Vikings one more chance, and CSU’s Trey Lewis was fouled on a 3-point attempt with 1.7 seconds to play.  But after hitting the first, Lewis missed the second and was then called for a lane violation for stepping in too soon while intentionally missing the third.  The Vikings fouled before the Crusaders could inbound on the ensuing play, but while Valpo missed the front end of its one-and-one, CSU’s ¾-court heave came up well short as the Crusaders improved to 3-1 in league action.

Playing without the services of junior Keith Carter at point guard for a second straight game due to injury, the Crusaders struggled a bit with Cleveland State’s always-tenacious ball pressure, committing 19 turnovers.  But when Valpo got shots up, they hit at a good rate, going 20-of-41 from the field, including a 41.2% (7-of-17) clip from 3-point range.

Leading the way for the Crusaders was Peters, who hit 5-of-7 from behind the 3-point line en route to a game-high 24 points, while also pulling down a team-best five rebounds.  Junior Darien Walker (Chicago, Ill./Simeon [John A. Logan/Arizona Western]) joined Peters in double figures with 10 points, seven of which came in the second half.  Tevonn Walker added nine points and three assists as well.

In a tight game throughout, the Crusaders held a slim lead most of the first half, pushing it to an apex of seven late in the period after a 7-0 run.  Sophomore Jubril Adekoya (Tinley Park, Ill./Andrew) started the spurt with a layup at the 7:31 mark, and Peters knocked down two free throws and hit a 3-pointer to give Valpo a 21-14 edge.  Cleveland State responded with the next five, however, and would eventually score the last four points of the half as the Crusaders led just 26-25 at the break.

Valpo would need just 41 seconds out of the half to push the lead back to seven points, as Fernandez completed an alley-oop while being fouled for a 3-point play and Darien Walker knocked down a 3-pointer on the fast break.  The Crusaders’ lead would reach seven on two more occasions in the second period, but each time Cleveland State answered.  A 7-0 run for the Vikings was capped by a dunk from Grady with 5:22 to play, giving CSU a 49-47 lead – its first of the second half – and eventually setting up the final stretch.

The Crusader defense was strong Saturday night, holding Cleveland State (9-9, 3-1 Horizon) to 36% shooting from the floor, including just a 5-of-18 clip from downtown.  Charlie Lee led the Vikings with 14 points, eight rebounds and six assists, while Grady scored a team-best 19 points on 8-of-12 shooting.

Valparaiso (16-3, 3-1 Horizon) has a week before its next game, traveling to Wright State for a 6 p.m. tip next Saturday evening.  As always, all the action can be seen live on the Horizon League Network via ESPN3.com and heard live on the Valpo Sports Network, with links for the live video and audio, as well as live stats, available at ValpoAthletics.com.