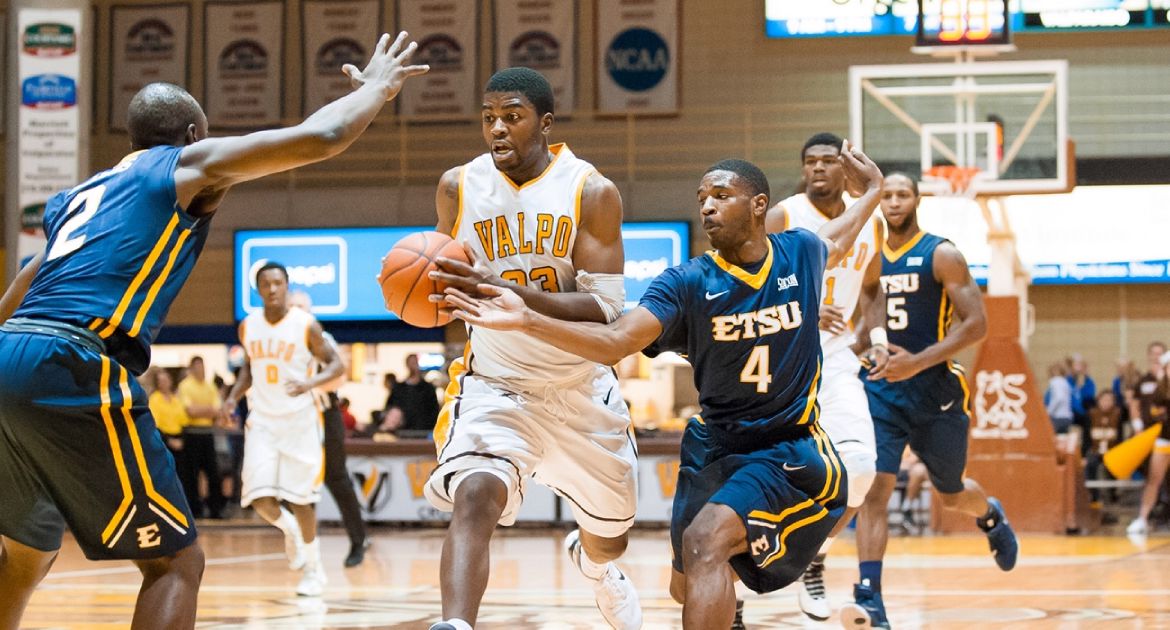 The Valparaiso men’s basketball team continued its impressive run of form, improving to 18-3 on the year and moving into a tie atop the Horizon League standings with a 77-62 victory at Youngstown State on Tuesday evening.

The Crusaders earned the victory with strong defense and impressive shooting from beyond the 3-point line.  The defense was as good as it has been during Valpo’s most recent five-game winning streak, limiting Youngstown State to just 35.7% shooting from the field and just a 6-of-20 (30%) effort from 3-point range.  The Crusaders’ opponents have all shot worse than 38% from the floor during this winning streak.

Meanwhile, after shooting just 28% from 3-point range over the last six games, Valpo exploded from downtown on Tuesday night.  The Crusaders hit 6-of-9 from deep in the first half to get it started and finished the game hitting at a 62.5% (10-of-16) clip from downtown.  Five different players hit triples for Valpo in the win, led by three 3-pointers each from sophomore Alec Peters (Washington, Ill./Washington) and freshman Tevonn Walker (Montreal, Quebec/Vanier College) – the latter knocking down all three of his attempts from deep.

Valpo scored the game’s first six points Tuesday, but found itself trailing 8-6 after eight straight from the Penguins.  YSU’s last lead would come five minutes into the game at 9-8, as sophomore Jubril Adekoya (Tinley Park, Ill./Andrew) knocked down shots from in close on each of the Crusaders’ next two possessions to give Valpo the lead for good.  Peters followed with a 3-pointer to extend Valpo’s edge to 15-9.

YSU rallied back to within one point, but again the sophomore duo responded, scoring the next seven points to make it a 22-14 Crusader lead.  The Penguins scored four straight to close within four, but that was as close as they would be the rest of the way, as Valpo’s 3-point barrage started.

Over a four-minute span, juniors Darien Walker (Chicago, Ill./Simeon [John A. Logan/Arizona Western]) and E. Victor Nickerson (Atlanta, Ga./Norcross [Charlotte]) joined the freshman duo of Tevonn Walker and Max Joseph (Montreal, Quebec/Vanier College) in hitting 3-pointers.  Joseph’s triple gave Valpo its largest lead of the first half at 11 points, and the Crusaders would eventually take a 34-25 advantage into the locker room.

Valpo quickly pushed the lead to 12 points out of the halftime break, as a triple by Tevonn Walker made it 39-27 with 18:40 to play.  But the Penguins would not go away, closing back to within single digits and getting as close as six points.  A putback by YSU’s Marcus Keene brought the Penguins within 47-39 with 13:05 remaining.

But the Crusaders put together one more big run to put away any doubt.  Tevonn Walker started the run with a step-over 3-pointer, and then took advantage of a second-chance possession with a driving layup two trips later.  Peters hit a pair of free throws the next time down the court, and then freshman David Skara (Zadar, Croatia/Ekonomska Skola Zadar) drove all the way to the basket for a layup of his own to make it a 17-point lead.

The Penguins coughed the ball up on their next possession on an inbounds pass, allowing Darien Walker an easy steal and fast-break basket.  After a YSU miss, the Crusaders ran a bit of clock before Joseph hit Peters for a bucket in the paint, capping a 13-0 run over a span of just over four minutes to push the lead to 60-39 with 8:51 to play.  The Penguins would get no closer than 14 points the rest of the way.

Peters led a balanced Valpo effort on the offensive end with 18 points in the win and added six rebounds and three assists.  Adekoya was nearly perfect from the floor, going 7-of-8 for a career-best 14 points in just 19 minutes off the bench.  Tevonn Walker scored 13 and pulled down five rebounds, while Darien Walker tallied 12 points and three assists.  Senior Vashil Fernandez (Kingston, Jamaica/Princeton Day [Md.] Academy) added eight points and three blocked shots.

Youngstown State (9-13, 0-7 Horizon) was led by 17 points from Osandai Vaughn, one of four Penguins in double figures.  Shawn Amiker added 12 points and six rebounds in the losing effort.

Valparaiso (18-3, 5-1 Horizon) battles for first place Friday evening with one of the two teams its tied with atop the league standings, as the Crusaders close out a three-game road swing at Green Bay.  Tipoff is slated for 8 p.m. and the game can be seen live on ESPNU.  As always, the game can be heard on the Valpo Sports Network, with links for the live audio, video and stats available at ValpoAthletics.com.