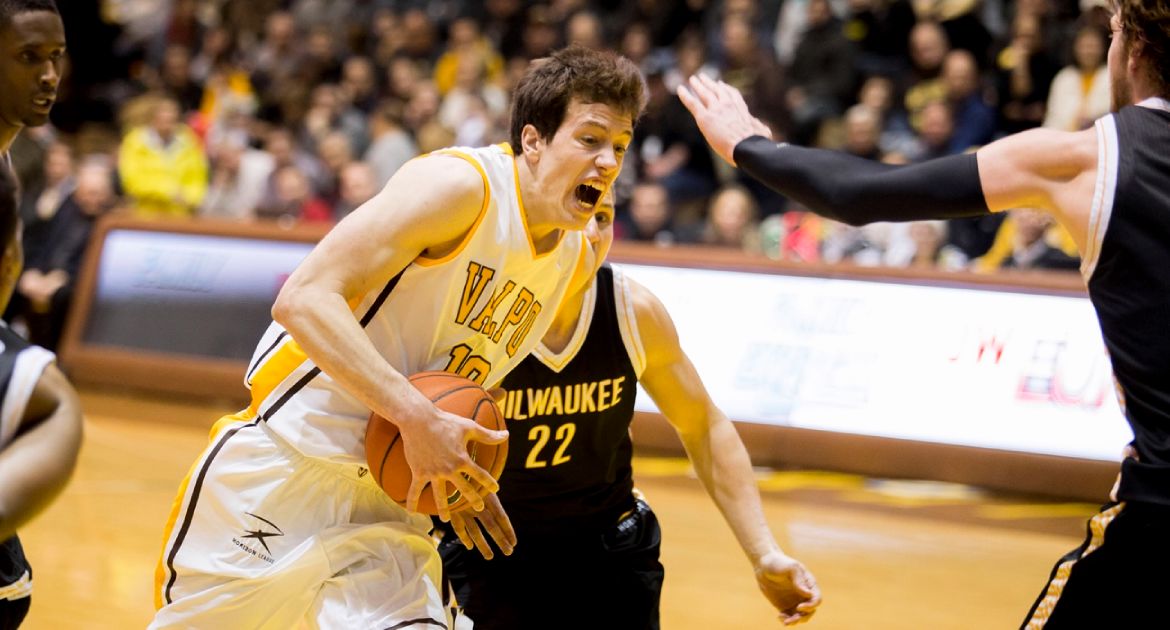 Valparaiso got off to such a hot start offensively on Monday evening against Milwaukee in Horizon League action that the Crusaders were even scoring points during media timeouts.  Valpo opened the game with 15 points inside the first five minutes of play and went on to a 73-48 victory over the Panthers to improve to 19-4 on the season.

A 3-pointer by freshman Tevonn Walker (Montreal, Quebec/Vanier College) got things going on the Crusaders’ first possession Monday, and on their next trip, sophomore Alec Peters (Washington, Ill./Washington) grabbed an offensive rebound and stuck it back home for a putback basket.  The next time down the floor, Peters found himself covered up in the corner with the shot clock winding down, but it was no problem for the sophomore, as his heave towards the rim found the basket.  The bucket was originally ruled a two-point field goal, but changed to a triple upon further review at the first media stoppage.

Walker drained his second triple of the game on Valpo’s next possession and then came up with a steal on the defensive end, converting two free throws at the other end after being fouled on the break.  Two possessions later, junior Darien Walker (Chicago, Ill./Simeon [John A. Logan/Arizona Western]) drove the lane for a basket as the Crusaders led 15-3 just 4:44 into the ballgame.

Valpo’s game-opening run continued a couple minutes later, as the Crusaders continued their lockdown defense, on an off-balance scoop shot with the shot clock nearing zero by freshman David Skara (Zadar, Croatia/Ekonomska Skola Zadar).  Peters finished in the paint on Valpo’s next possession to make it 19-3 Crusaders with 12:57 to play in the first half.

Milwaukee’s Steve McWhorter scored for the Panthers on their next possession, but Valpo would then hold Milwaukee scoreless for the next 6:48.  Over that stretch, Skara and Peters scored four points apiece for the Crusaders, while Darien Walker added a 3-pointer, as Valpo pushed its lead to 30-5 with 5:46 left in the first half.  The Crusaders would eventually carry a 39-16 advantage into the halftime break.

Valpo made sure the Panthers would not threaten in the second half, answering each time Milwaukee cut the lead to 20 in the final period.  Matt Tiby knocked down a pair of free throws to bring the Panthers within 55-35 with 11:12 remaining, but the Crusaders went on a 12-1 run – including six points from Peters – over the next 4:48 to ice the game.

Peters paced the Crusaders on Monday, needing just 24 minutes to score 24 points as he finished the night 10-of-14 from the floor.  The sophomore added a team-high six rebounds as well.  Skara enjoyed his best game of the season against a Division I opponent, going 4-of-5 from the field and 5-of-5 from the foul line for 14 points and adding three rebounds.  Tevonn Walker chipped in 10 points and recorded three steals.

While the Crusaders couldn’t maintain their torrid early pace all game, they still finished the night hitting at a solid 56.3% (27-of-48) clip from the floor and were 6-of-10 from the 3-point line.  Valpo also posted its best game of the season from the foul line, going 13-of-15 (86.7%).  The Crusaders out-rebounded Milwaukee by a 29-23 margin and committed just nine turnovers.

Milwaukee (7-14, 2-5 Horizon) was led by 15 points from Tiby, while McWhorter finished with 12 points and five assists.  Justin Jordan added 11 points as well in the losing effort.  The Crusaders limited the Panthers to just 38.3% (18-of-47) shooting from the field and just 1-of-17 from behind the 3-point stripe.

Valparaiso (19-4, 6-2 Horizon) enjoys a short break before its next game, as the Crusaders travel to UIC for a Saturday afternoon matinee.  Tip is set for 2 p.m., and the game can be seen live nationwide on the American Sports Network.  Links for the live audio and video, as well as live stats, will be available at ValpoAthletics.com.