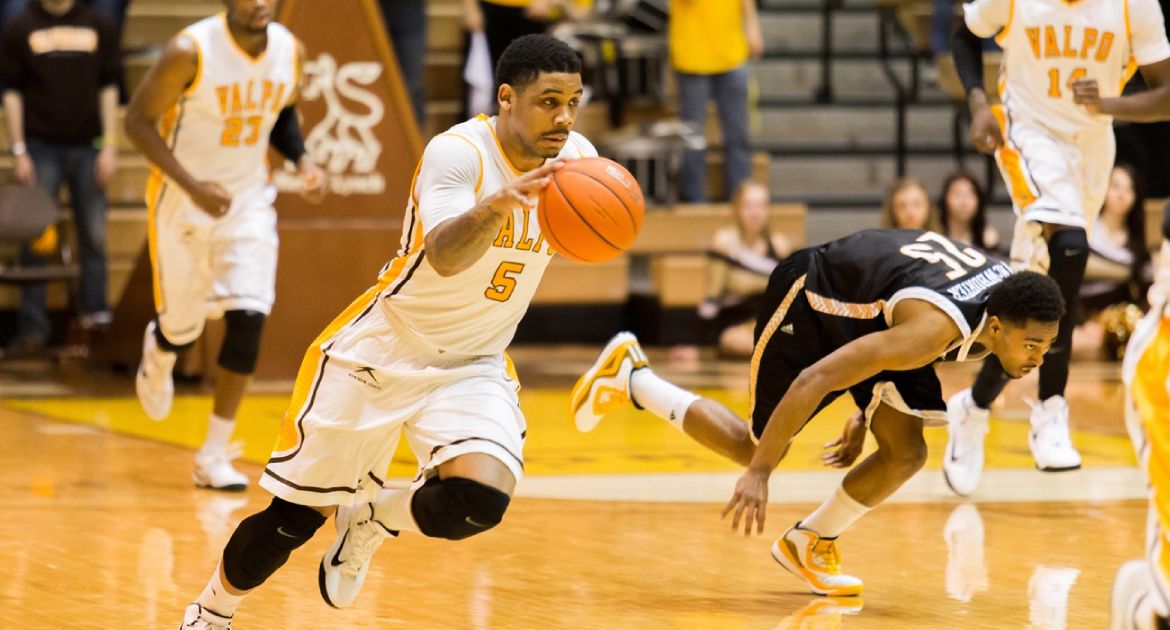 The Valparaiso men’s basketball team led by as many as 18 points and held off a UIC surge in the second half, eventually coming out on top 70-65 in Chicago on Saturday afternoon.  During the win, which moved the Crusaders into a tie atop the Horizon League standings, senior Vashil Fernandez (Kingston, Jamaica/Princeton Day [Md.] Academy) broke Valpo’s single-season record for blocked shots.

Fernandez came into the game with 69 blocks on the season, two shy of the single-season mark set last season by Moussa Gueye.  The senior picked up the record-tying block with 6:04 to play in the first half, swatting a layup attempt by Jake Wiegand.  Fernandez then rejected a jumper by Jason McClellan with 18:49 remaining in the game for the record-breaker, and added another block later in the contest – his 73rd of the season.

Four Crusaders scored in double figures on Saturday, led by 19 points from sophomore Alec Peters (Washington, Ill./Washington), who went 8-of-15 from the field and added seven rebounds.  Freshman Tevonn Walker (Montreal, Quebec/Vanier College) scored 14 points on Saturday, including an impressive tip dunk late in the second half, and also came up with three steals.  Walker scored seven of his points in the second half and played a team-high 18 minutes despite suffering an ankle injury late in the first half.

The Crusaders needed all the big efforts to offset a career-best effort from UIC’s Ahman Fells.  Fells went 11-of-13 from the field and hit six 3-pointers to finish with a game-high 28 points.  Outside of Fells’ performance, however, Valpo limited the rest of the Flames to just 9-of-39 shooting from the field.

Leading by 14 at the half, the Crusaders surrendered the first basket of the second half but then scored on three straight possessions, as Peters, Nickerson and Darien Walker all connected to give Valpo a 45-27 lead with 18:14 to play.  UIC scored the next four points, but the lead would remain in the mid-teens for the next few minutes, as the second of back-to-back Peters’ 3-pointers made it 55-40 Valpo with 12:46 remaining.

The Crusaders would be held to just six points over the next 10 minutes, however, as UIC went on a 20-6 run over that span to close within one point.  The Flames hit eight free throws during the run, and a 3-pointer by Fells with 5:05 to play made it a one-possession game for the first time since the game’s early stages.  Two trips later, Paris Burns connected on a fast-break layup to cut Valpo’s lead to 61-60 with 3:46 remaining.

Two trips later, Nickerson connected on two free throws to push the lead back to three points.  After forcing a miss on the defensive end, Valpo ran down the shot clock nearly all the way before a driving effort by Peters was just off the mark.  Tevonn Walker was there though, leaping over two of his teammates for a one-handed tip dunk to make it 65-60.  Walker didn’t stop to celebrate either, hustling back on the defensive end and stripping Burns before being fouled, hitting two free throws to make it a seven-point lead.

Burns would connect on a 3-pointer to keep UIC alive, and McClellan hit two free throws with 30 seconds to play to cut Valpo’s lead to two points at 67-65.  Darien Walker was fouled for the Crusaders, hit the first and missed the second, but hustled to grab his own rebound and keep the possession.  Tevonn Walker split a pair with 15 seconds to play to make it a two-possession game, and the Crusaders would not allow UIC to hit another shot, closing out the five-point win.

Valpo took the lead for good very early on in the first half and extended the advantage slowly over the course of the opening period.  A layup by Nickerson 9:33 into the game pushed the lead into double figures for the first time and capped a quick 7-0 spurt as the Crusaders led 22-11.  The lead reached 16 points on a putback by sophomore Jubril Adekoya (Tinley Park, Ill./Andrew) with 4:43 to play in the half, and Valpo eventually took a 39-25 lead into the locker room at the break.

Valparaiso (20-4, 7-2 Horizon) puts first place on the line on Wednesday evening at the ARC as the Crusaders host Detroit at 7:05 p.m.  The game can be heard live on the Valpo Sports Network and seen live on ESPN3.com, with links for the live audio, video and stats available at ValpoAthletics.com.