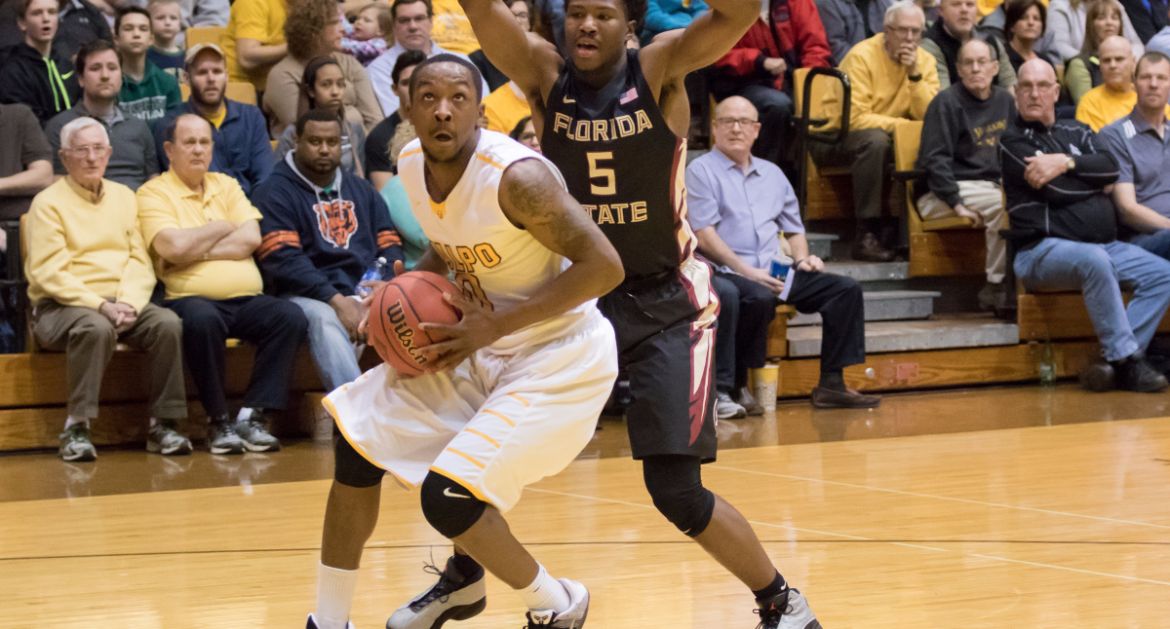 Next Up in Crusader Basketball: One win away from a trip to Madison Square Garden, the Valparaiso University men’s basketball team hosts Saint Mary’s Tuesday evening at 6 p.m. at the ARC in the first of four quarterfinals in the 2016 NIT. With a victory, the Crusaders would set program records for most overall victories and most home wins in a single season, as well as win three postseason games for the first time in program history.

Last Time Out: Valpo became the first team to advance to the quarterfinals of the 2016 postseason NIT on Thursday evening, as the Crusaders took down ACC foe Florida State in front of a packed house at the ARC by an 81-69 final. The Crusaders, who were hosting an ACC opponent for the first time in program history, were led by 26 points (9-14 FG, 6-7 FT) from junior Alec Peters, while fellow junior Shane Hammink came up one point shy of his season high, finishing with 18 points.

Head Coach Bryce Drew: Bryce Drew (122-48) is in his fifth season at the helm of the Crusader men’s basketball program in 2015-16. In his first five years, Drew has led Valpo to four Horizon League regular season titles, two Horizon League tournament championships and five postseason berths, including a pair of NCAA Tournament appearances. The 2012, 2015 and 2016 HL Coach of the Year, Drew ascended to the head coaching position on May 17, 2011 after spending six seasons as an assistant and associate head coach with the Crusaders.

Series Notes: Valpo and Saint Mary’s will be meeting on the hardwood for the first time in program history. This is the 15th time in the Crusaders’ program history they have met a team currently in the West Coast Conference, with Valpo holding a 10-4 record all-time against current WCC programs - including most recently a 70-55 win over Portland last season in both teams’ finale at the Challenge in Music City in Nashville, Tenn.

@ValpoBasketball...
...in the @HorizonLeague preseason projections
- Valpo was picked to win the Horizon League in preseason polling, earning 36 of the 43 first-place votes.
- With the regular season title this year, the Crusaders have not finished worse than their preseason projection in the last six years.
- Junior Alec Peters was named to the preseason First Team All-League for a second straight season.
- Seniors Vashil Fernandez and Darien Walker and sophomore Tevonn Walker all earned spots on the preseason Second Team.

...notes from Florida State NIT game
- Hosting an ACC team for the first time in program history, the Crusaders never trailed, taking the lead for good 22 seconds into the game.
- Valpo has not trailed yet in the NIT and has been tied for just 52 seconds.
- Alec Peters led the Crusaders in scoring for the ninth straight game, finishing with 26 points, and also paced the team in rebounding for the seventh time in that stretch with nine boards.
- Shane Hammink came up one point shy of his career high with 18 points (6-9 FG) and didn’t commit a turnover - the junior has just one turnover in 57 minutes of action in the NIT.
- Valpo assisted on 19 of its 26 field goals, led by six assists from senior Keith Carter.
- For the second straight game, the Crusaders limited their opponent to 3-of-15 shooting from 3-point range.
- Valpo has now scored 80 or more points in six of its last seven games.

...at the ARC
- Valpo had 15 regular season home games scheduled for the Athletics-Recreation Center in 2015-16 and is now 16-1 at home this year following Thursday’s win over Florida State.
- The Crusaders had their school-record 25-game home winning streak snapped Feb. 13 against Wright State - the winning streak dated back to Dec. 2014.
- The 16 home wins this year match the 2012-13 Crusader squad for the most home wins at the ARC in program history.
- Valpo is 16-1 at home this year after going 15-1 at the ARC last season - this year’s .941 home winning percentage is the second-best in ARC history, trailing only the perfect 14-0 mark posted by the 1994-95 Crusader squad.
- Over the last 21 years, the Crusaders own a 266-58 (.821) winning percentage on their home court.

@SaintMarysHoops
- Saint Mary’s enters Tuesday’s matchup at 29-5 overall this year, having set a program record for wins in a single season.
- The Gaels went 15-3 in West Coast Conference play this season.
- Saint Mary’s advanced to the NIT quarterfinals by virtue of a 77-65 victory over Georgia on Sunday evening.
- Sophomore guard Emmett Naar leads the Gaels, averaging 14.2 points and 6.4 assists per game.
- Four SMC players average in double figures, including junior Dane Pineau, who posts 11.3 points and 8.2 rebounds per game on 66.8% shooting.

Crusader Postseason History
- Valpo has matched its postseason best by winning a pair of games in this year’s NIT.
- Valpo most famously won two games to reach the Sweet Sixteen of the 1998 NCAA Division I Men’s Basketball Championship, and also won two games apiece in the 1962 and 1967 NCAA College Division Championships.
- In its third NIT appearance (2003, 2012), the Crusaders earned their first win in the tournament with last Tuesday’s win over Texas Southern.
- Valpo previously lost at Iowa in 2003 and lost at Miami in 2012.
- The Crusaders’ last postseason victory prior to last Tuesday came in the first round of the 2008 CBI, when Valpo won at Washington.

Back in the Postseason
- With the Horizon League regular season title, the Crusaders secured a berth in the postseason NIT.
- Valpo was one of the ‘First Four Out’ of the NCAA Tournament, assuring the Crusaders a one seed in the NIT.
- This year is the sixth straight season Valpo has appeared in postseason play and the 15th time in the last 21 years.
- Every four-year senior class since the 1995 class has made at least one postseason trip.

All-League Honorees
- Three Crusaders were honored with Horizon League postseason awards, all of whom earned repeat accolades.
- Head coach Bryce Drew earned Coach of the Year honors for the third time in his career (2011-12; 2014-15).
- Drew joins Pete Gillen, Jim Crews, Barry Collier, Bruce Pearl and Todd Lickliter as the only coaches to be named Horizon League Coach of the Year at least three times.
- Senior Vashil Fernandez was named Defensive Player of the Year for a second straight year - the first player in league history to earned the honor twice - and also repeated as a member of the league’s All-Defensive Team.
- Junior Alec Peters was named a First Team All-Horizon League selection for the second straight season.

Peters Closing With a Flourish
- Junior forward Alec Peters has been at his best for the Crusaders in the last month of the season.
- Over the last four weeks, Peters has posted four double-doubles in seven games and is averaging 26.0 points and 10.6 rebounds per game on .554/.479/.855 shooting.
- Peters was named a USBWA All-District V honoree - one of just 91 honorees nationwide - and was also a member of the Horizon League All-Tournament Team.
- Peters was named CBS Sports National Player of the Week Feb. 22 - the first player in program history to earn the honor from CBS Sports - and was chosen as American Sports Network National Player of the Week Feb. 29.
- Peters earned Horizon League Player of the Week honors from both the league office and College Sports Madness both weeks.
- With his efforts over the last month, Peters has moved into Valpo’s single-season top-10 charts in both scoring and rebounding - the only player in Crusader history to rank in the top-10 in both categories for the same season.

Look at the Record Book
- Both senior Vashil Fernandez and junior Alec Peters are moving up the Crusader record books in a number of categories.
- Beyond his school-record block total (now at 275 total blocks), Fernandez also ranks 12th in Crusader history with 657 career rebounds.
- Fernandez also surpassed his own single-season blocked shots record in the NIT opener versus Texas Southern and now has 105 blocks this season.
- Meanwhile, Peters passed Raitis Grafs for fifth place in Valpo history in career scoring last time out and enters Tuesday’s game with 1,632 career points - just 43 points shy of Lubos Barton for fourth position.
- Peters also ranks second in 3-point % (43.6%), fourth in 3-pointers made (225), sixth in free throw % (82.6%) and 10th in rebounding (677).
- In addition, senior Keith Carter moved into Valpo’s all-time top-20 in assists at UIC and now ranks 16th in Crusader history with 288 career assists.
- Peters has scored 629 points this year, third-most in a season in program history - the junior passed Bryce Drew’s junior (617) and senior (613) years last time out.
- He has already grabbed 286 rebounds as well, good for seventh in a single year, and has hit 85 3-pointers, sixth-most in a single season.
- Carter has cracked the single-season top-10 for both assists (148, 8th) and steals (53, t-8th).

Rolling in the Wins
- This year’s Crusader team reached 20 victories with the win at UIC - the 19th team in Valpo men’s basketball history to win at least 20 games and the fourth under Bryce Drew.
- The victory over Florida State on Thursday was Valpo’s 28th of the season, matching the program record for victories in a single season.
- Last year’s squad won a school-record 28 wins, finishing the year with a 28-6 overall record.
- Valpo enters Tuesday’s game with 28 wins, one of just 17 programs in the nation with 28 or more victories as of the end of play Sunday.

Glance at the Rankings
- Valpo received three votes in the Mar. 14 AP top-25 poll, the eighth time in the last nine weeks the Crusaders have received votes, and have received votes in the coaches top-25 poll seven times.
- The Crusaders have received votes in 10 editions of the AP poll this season and picked up 30 points Jan. 18 - their highest total of points ever in the AP poll.
- The Crusaders earned a season-high 16 points in the Jan. 18 poll, their highest regular-season tally in poll history (Valpo finished ranked #23 in the postseason poll in 1998).
- As of Sunday, Valpo ranked 43rd in the nation in RPI.
- Following the win over Detroit and subsequent results, the Crusaders moved up to #18 in Ken Pomeroy’s rankings - their high-water mark this season.
- As of Sunday, Valpo ranks #41 in the KenPom ratings.
- Valpo closed last season at #61 in the KenPom ratings - its highest year-end ranking was back in 2001-02 (#51).

Getting It Done With Defense
- One of the best defensive teams in the nation last season, the Crusaders have been even stronger defensively this season.
- As of Sunday, Valpo ranked 14th in the nation in Ken Pomeroy’s adjusted defensive efficiency.
- In traditional stats, Valpo ranks ninth nationally in scoring defense (62.7 ppg) and third in field goal percentage defense (38.4%).
- Valpo has held 12 Division I opponents to one of their three worst offensive efficiencies of the season.
- Valpo has given up 47 or fewer points six times this season - the first time the program has done that in one season since the 1946-47 campaign.
- Anchoring the defense is senior center Vashil Fernandez, who owns a school-record 275 career blocked shots.

Crashing the Glass
- Combined with their stellar defense has been a tremendous effort on the glass, as Valpo currently ranks sixth nationally with a +9.3 rebound margin.
- Valpo’s +31 advantage at Youngstown State was its best against a Division I opponent in at least two decades.
- The Crusaders held the advantage on the glass in 17 of 18 Horizon League games, including a double-figure advantage 11 times.
- Valpo finished league play with an average edge on the boards of +12.9, while Alec Peters (9.2 rpg) and Vashil Fernandez (8.4 rpg) ranked 2-4 in the league in rebounding in league-only action.