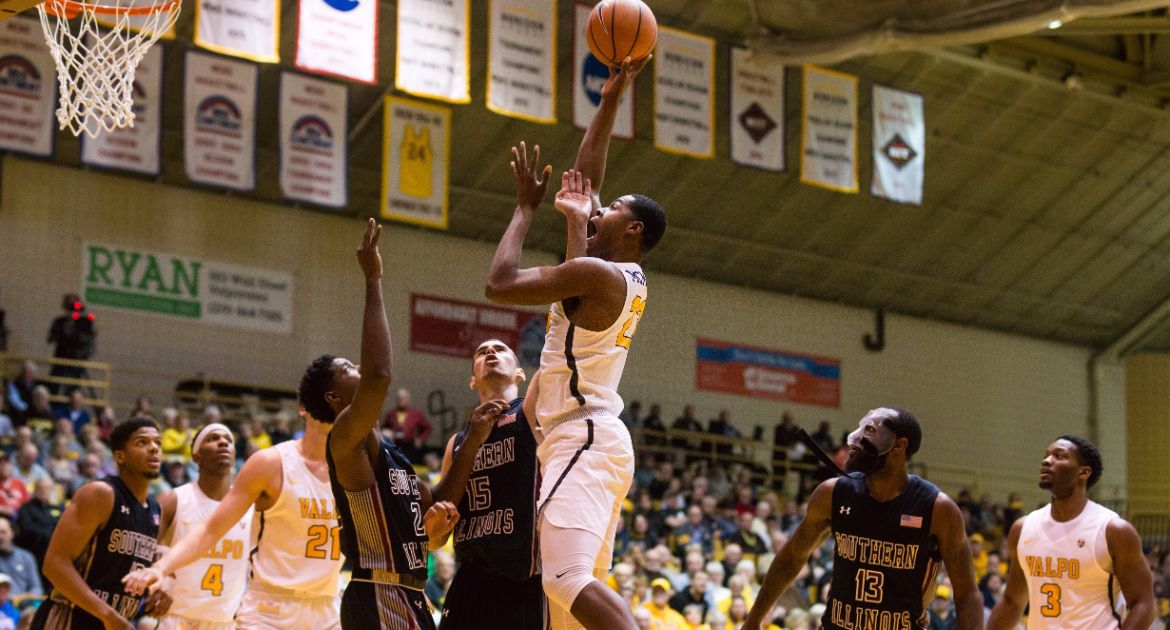 Next Up in Crusader Basketball: The Valparaiso University men’s basketball team kicks off the home stretch of Missouri Valley Conference play on Sunday afternoon as it welcomes Illinois State to the ARC for a nationally-televised matchup. Valpo will play three of its next four games at the ARC.

Last Time Out: Valpo came up just short of earning its first Missouri Valley Conference road victory Wednesday night at Evansville, eventually dropping a 63-59 decision to the Purple Aces. The Crusaders had three shot attempts in the final two minutes that would have tied the game or given them the lead, but couldn’t connect on any of them. Bakari Evelyn and Markus Golder tied for team-high honors with 15 points apiece, while Evansville’s Ryan Taylor led all players with 31 points.

Head Coach Matt Lottich: Matt Lottich (36-23) continued the Valparaiso University men’s basketball program’s run of success in his first season as head coach of the Crusaders, and is poised to keep the program at a high level as he enters his second season in charge in 2017-2018. In his first season at the helm, Lottich guided Valpo to its fifth Horizon League regular season championship in the last six years as he led the Crusaders to 24 wins and an at-large berth into the NIT.

Series Notes: Despite being a pair of mid-major programs located just 2 1/2 hours apart, Valpo and Illinois State have met just 12 times over the years and had not played each other since 1981 prior to this season’s first matchup. The Redbirds hold an 8-4 advantage in the all-time series, including a 76-65 victory at Illinois State just two weeks ago. Valpo’s four wins in the series all came between 1943 and 1945.

@ValpoBasketball...
...and @ValleyHoops
- Valpo was selected to finish in sixth place in the MVC preseason poll, finishing just 12 points behind Southern Illinois for fifth place.
- Valpo has not finished worse in the final standings than its preseason projection in the last seven years.
- Senior Tevonn Walker represented the Crusaders among the preseason All-Conference honorees, earning Second Team accolades.

...looking back at last year
- The Crusaders are coming off of their third consecutive Horizon League regular season title and their fifth in the last six years, posting a 14-4 mark within league play and a 24-9 record overall.
- The regular season was highlighted by a win over #21 Rhode Island at the ARC - the program’s first win over a ranked opponent since 1998 - and wins in Las Vegas over Alabama and BYU to earn the MGM Grand Main Event title.
- Valpo earned an at-large bid into the Postseason NIT for the second time in program history, falling at Illinois in a first-round matchup. The NIT berth extended the Crusaders’ string of postseason appearances to seven straight seasons.
- Alec Peters was named an NABC Third Team All-American and an AP Honorable Mention All-American and claimed the Horizon League Player of the Year award.
- Peters closed out his career as the Crusaders’ all-time leading scorer and rebounder.
- Shane Hammink was a Second Team All-League selection, while Tevonn Walker was named to the league’s All-Defensive Team.

...notes from Evansville
- An 8-1 spurt from the Crusaders late in the first half helped Valpo claim a 32-31 lead at the half.
- Valpo led by as many as six in the second half and was still up 43-40 with 12:29 to play before going scoreless for a stretch of nearly seven minutes.
- The Crusaders had three attempts to tie or take the lead in the final two minutes, but were unable to capitalize on any of the three.
- Sophomores Bakari Evelyn and Markus Golder tied for team-high honors with 15 points.
- Sophomore Jaume Sorolla set new career highs with four blocked shots and three steals.
- The Crusaders were unable to overcome a foul line disparity for a second straight game, as Valpo was just 5-of-5 from the stripe while Evansville was 16-of-23 from the free throw line.

...notes from Southern Illinois
- Valpo led 31-25 at the half and held as much as an eight-point advantage early in the second half.
- Tevonn Walker made a pair of free throws with 2:05 to play to give Valpo a 59-56 lead, but the Salukis would score the game’s final nine points, going ahead for good on an Armon Fletcher 3-pointer with 44 seconds remaining.
- Walker paced Valpo with 16 points, while Bakari Evelyn and Markus Golder scored 13 points apiece. Evelyn added a career-best nine rebounds, while Golder set a new career high with five assists.
- Both Valpo and SIU shot 49% (24-of-49) from the field for the game, but the Crusaders couldn’t overcome the difference at the free throw line, as SIU went 14-of-24 from the charity stripe, while Valpo made just 11 trips and was just 5-for-11.
- Valpo was also undone by 17 turnovers – 14 of which were committed in the first half. Despite turning the ball over six more times than SIU, the Crusaders actually held a 13-11 advantage in points off turnovers.

...looking ahead
- The Crusaders make the short trip to the north side of Chicago to take on Loyola on Wednesday.
- Valpo then returns home for a matchup with Bradley on Saturday night.

@Redbird_MBB
- Illinois State enters Sunday’s game with a 14-11 overall record and is 8-5 in MVC play, tied for second in the conference standings.
- The Redbirds have won four straight games, most recently taking down Southern Illinois in overtime.
- Milik Yarbrough leads the way, as one of the conference’s top all-around players averages 16.4 points, 6.3 rebounds and 4.7 assists per game.

Strength of The Valley
- This season’s iteration of the Missouri Valley Conference has proven to be the Crusaders’ most challenging conference slate in recent history.
- The MVC is currently ranked eighth in conference RPI and ninth in KenPom this season.
- Each of the other nine MVC programs is ranked 165th or better in RPI and 166th or better in KenPom.
- Last year, six of Valpo’s nine league opponents ranked lower than the lowest MVC opponent this season in both RPI and KenPom.

Thievery
- One area where this year’s Crusader squad has excelled is in the steals category, as Valpo is averaging an MVC-best 7.8 steals/game - a mark which ranks 25th nationally.
- The Crusaders are on pace for their highest steals/game average for a single season since the 2002-03 squad recorded 8.8 steals/game.
- Leading the way in the steals department is Tevonn Walker, who ranks second in the Valley with 1.9 steals/game and is on pace to crack Valpo’s single-season chart in the category.
- Walker has 41 total steals this year, while Max Joseph has 40 and Bakari Evelyn 38 - the Crusaders have not had three players tally 40+ steals in a season since the aforementioned 2002-03 campaign (Ali Berdiel-57; Stalin Ortiz-56; Greg Tonagel-41).

On the Brink
- While the Crusaders are still looking for their first road win in MVC play, they have been highly competitive in most of their road contests.
- Valpo held a one-point halftime lead at Evansville last time out and led by as many as six points in the second half.
- The Crusaders have now been tied or led at hafltime in five of their seven MVC road games this season.
- Overall within MVC play, home teams have won at a 70.8% clip - the second-highest percentage of home victories within conference play, trailing only the Ivy League.

Moving Up the Charts
- Tevonn Walker moved into Valpo’s career top-20 in scoring in early January.
- Walker surpassed Chuck Kriston (1960-63) for 17th position in the win over Indiana State last Wednesday and now has scored 1,316 career points.
- Next up for Walker is Milo Stovall (1998-2002) in 16th position, who finished his career with 1,345 career points.
- Walker also moved into Valpo’s career top-10 in steals versus Indiana State as well, passing Raitis Grafs - he owns 143 career steals, just two shy of Howard Little for ninth position.

Defending the 3-Point Line
- Valpo has been strong in defending the 3-point line this season, as its opponents have connected at just a 30.7% clip from distance - a mark which ranks 14th nationally.
- Eight times this year, Crusader opponents have shot 25% or worse from 3-point range, including three of Valpo’s last four outings.
- Valpo has held its opponents to six or fewer 3-pointers in each of the last nine games.

We Are Young
- The Crusaders feature nine underclassmen on their roster.
- The active squad boasts two seniors, six sophomores and three freshmen.
- Valpo ranks 254th nationally in Ken Pomeroy’s experience metric, which weights the experience of each player based on minutes played - the Crusaders’ ranking is the lowest in The Valley.

Valpo in the Valley
- A new era begins this year for Valpo men’s basketball and the athletics department and University as a whole, as the 2017-18 year is Valpo’s first as a member of the Missouri Valley Conference.
- The Valley is renowned for its men’s basketball success on the national stage. Since the year 2000, The Valley has earned 33 bids to the NCAA Tournament – 18 automatic bids and 15 at-large berths – and has posted 27 tournament victories.
- Since 2010, 12 MVC programs in the NCAA Tournament have combined for 16 victories.
- The Crusaders are looking to carry over the success they’ve had in the past two-plus decades into The Valley.
- Over its last 13 years as a member of the Mid-Continent Conference (1994-2007), Valpo claimed nine regular season and eight tournament championships.
- Then, in a decade as a Horizon League member (2007-2017), the Crusaders won five regular season and two tournament titles.

Third-Best Start
- The loss to Purdue capped the Crusaders’ open to the 2017-18 season as the third best in program history.
- Valpo ended up 8-0 to start this season - the only two starts in program history better than 8-0 both came from teams which boast renowned monikers.
- The World’s Tallest Team (1944-45) won 11 straight contests to open that season en route to a 21-3 record.
- The best start all-time by a Crusader squad came from the Victory Five (1923-24), which won its first 22 games of the year and finished the season 24-4.

Perfect Month
- With its win over Utah State, Valpo secured a perfect record in the month of November, finishing the month 8-0.
- It marked just the second perfect month for the Crusaders over the last 70 years (minimum three games played).
- The only other month where Valpo posted an undefeated mark came in February of 1998, as the Crusaders went 7-0 - a streak which eventually extended to a total of 13 straight wins as Valpo advanced to the Sweet 16.

Winning Big
- The first five of the Crusaders’ wins this season all came by at least 20 points, the first time in program history that Valpo has won five straight by 20+ points.
- The Crusaders’ first four wins of the year all came by at least 25 points, the first four-game winning streak in program history where all four wins came by 25+ points.
- The 25-point win at SIUE marked Valpo’s largest known margin of victory in a road opener (dating back to the mid-1940s when sites are denoted within the all-time results).

Developing Pros
- Valpo has had an entire team’s worth of talent from the past five years go on to professional basketball careers.
- Most notably, Alec Peters was selected by the Phoenix Suns with the 54th pick in the 2017 NBA Draft and is currently on a two-way contract with Phoenix and the Northern Arizona Suns of the G-League.
- Peters is currently averaging 18.3 points and 8.1 rebounds per game for the NAZ Suns and has appeared in eight games, scoring 16 points, for the Phoenix Suns.
- E. Victor Nickerson (2016) has also seen time in the G-League with the Fort Wayne Mad Ants.
- Ryan Broekhoff (2013) highlights the Crusaders’ international pros who have graduated in the last five years, as he currently stars for Lokomotiv in Russia’s VTB United League and the EuroCup.
- Shane Hammink (2017) is playing for Bilbao Basket of Liga ACB in Spain - the top division - while Jubril Adekoya (2017), Vashil Fernandez (2016) and Kevin Van Wijk (2013) are all playing for CB Peñas Huesca of LEB Oro - Spain’s second division.
- Lavonte Dority (2014) is playing for Den Helder Suns in the Netherlands, while Jordan Coleman (2014) has played for Omnia Basket in Italy’s second division.