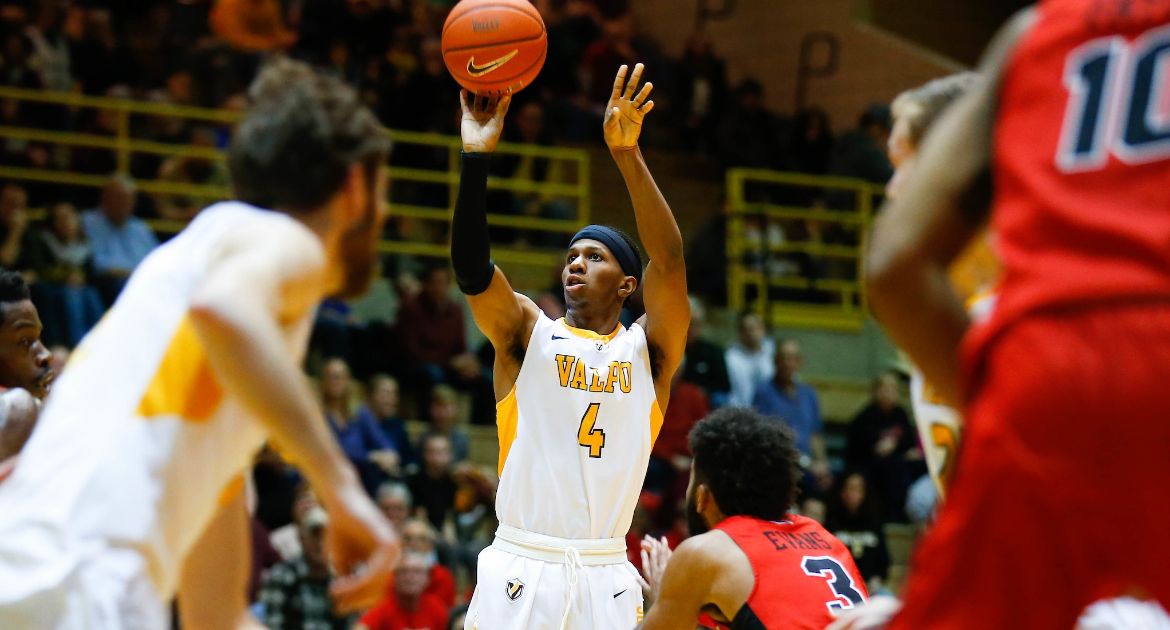 Next Up in Valpo Basketball: Coming off of a thrilling buzzer-beating win over Illinois State in its MVC opener, the Valparaiso University men’s basketball team hits the road for the first time in Valley play on Saturday afternoon as it takes on Missouri State in Springfield at 1 p.m.

Last Time Out: Valpo rallied from 10 points down with less than two minutes to play on Wednesday evening in its MVC opener against Illinois State, capped by Markus Golder hitting a running right-handed effort from 50 feet that banked in with the clock at triple zero, setting off a raucous celebration in the ARC as Valpo celebrated a 58-56 victory over the Redbirds.

Head Coach Matt Lottich: Matt Lottich (47-32) is in his sixth season overall at Valpo and third as head coach in 2018-19. Lottich led Valpo to 15 victories in his second season in charge in 2017-18 and guided the the program through the transition to the MVC, which ended the campaign ranked eighth nationally in conference RPI. In his first year as head coach, Lottich guided Valpo to its fifth Horizon League regular season championship in the last six years as he led the team to 24 wins and an at-large berth into the NIT.

Series Notes: Missouri State holds a 16-8 advantage in the all-time series with Valpo. The Crusaders had won four straight in non-conference matchups this decade, but the Bears captured all three meetings in Valpo’s first season as an MVC member - 67-50 in Valpo, 64-57 in Springfield and 83-79 in St. Louis in the opening round of the MVC Tournament.

...in the win over Illinois State
- Valpo was down 10 with 2:07 to play when ISU’s Matt Chastain tipped in a miss - Valpo had just a 1.3% win probability at that point.
- Valpo had three offensive rebounds in the final 80 seconds, leading to second-chance baskets from Markus Golder and Derrik Smits. Golder also drew a pair of offensive fouls in the backcourt in the final 40 seconds.
- Golder hit the first two of three free throws with 5.1 seconds to play to cut ISU’s lead to 56-55, but missed the third and the Redbirds’ Zach Copeland grabbed the rebound and was fouled with 2.9 seconds to play.
- Copeland missed the front end of the one-and-one, Golder grabbed the rebound and took three dribbles before unleashing his buzzer-beater.
- The late comeback was necessary thanks to a prolonged drought from the field spanning both halves. Derrik Smits made an inside basket with 4:58 to play in the first half which gave Valpo a 25-21 lead, but the next field goal for Valpo would not come until Fazekas connected on a 3-pointer with 11:08 to play in the game – a span of 13:50 – to snap an 18-2 Illinois State run as the Redbirds had pushed their lead to 12 points.

...in the win over Purdue Northwest
- Valpo never trailed on Saturday, pushing the lead to double figures less than nine minutes into the game.
- The game was Valpo’s first since playing at Texas A&M on December 19. The 10-day span between games was the most for a Valpo team in regular season action since the 2006 squad went 11 days between playing at Evansville (Dec. 5) and at Ball State (Dec. 16).
- Saturday’s win secured Valpo’s ninth consecutive winning non-conference slate.
- The Brown and Gold dominated the inside, out-rebounding PNW – which was playing the game as an exhibition – by a 50-26 margin and out-scoring the Pride in the paint, 54-16. 24 of Valpo’s 54 interior points came via 12 dunks from six different players, led by Markus Golder’s five dunks.

...looking ahead
- Valpo returns home Tuesday night to host Bradley before hitting the road for back-to-back games at Southern Illinois and at Loyola.

@MSUBearsHoops
- Missouri State enters Saturday’s game at 6-8 overall and dropped its MVC opener at Southern Illinois on Wednesday, 75-70.
- The Bears are 6-0 at home this season, but 0-8 in road/neutral games.
- Tulio Da Silva leads the way for the Bears, scoring 15.7 points per game on 60.7% shooting, while Keandre Cook and Jarred Dixon add 13.9 points per game apiece as well.

Buzzer Beaters
- Golder’s buzzer-beater added to the lore of last-second shots in Valpo history.
- It was Valpo’s first game-winner with the clock at zero since Ryan Broekhoff connected on a 3-pointer to give Valpo the 70-69 win in the 2013 Horizon League semifinal at the ARC over Green Bay.
- It was Valpo’s first game-winner from beyond halfcourt since Greg Tonagel drilled a heave from the opposite 3-point line for a 71-68 win over Belmont at the ARC on Jan. 11, 1999.
- Of course, the most famous buzzer-beater in program history came courtesy of Bryce Drew in the first round of the 1998 NCAA Tournament versus Ole Miss.
- Golder’s shot came in at the top spot on SportsCenter’s Top 10 on Wednesday night’s countdown. He became the third different Valpo athlete over three different sports to earn a SportsCenter Top 10 spot since Valpo joined The Valley.

Looking For 2-0
- Valpo is looking to get to 2-0 in MVC play on Saturday - a mark it has reached just once in the last seven seasons.
- Last season, it took Valpo until its fifth MVC game to earn its second conference victory.
- Despite winning five regular season titles in its last six seasons in the Horizon League, the 2015-16 season was the only time in that stretch Valpo won each of its first two league games.

A Low-Scoring Win
- The 58 points Valpo scored in its win on Wednesday was one of the lowest outputs in a win in recent history.
- It matched the program’s fewest points in a victory since a 54-44 win over Green Bay in the 2015 Horizon League championship game.
- Valpo scored 58 points as well (58-55) in its victory at Rhode Island on Nov. 17, 2015.

Earning Honors
- Junior Ryan Fazekas became the first Valpo player since the program joined the MVC to earn a weekly award from the conference office, as he was named the MVC Newcomer of the Week on Jan. 2.
- Fazekas earned the honor after leading all players in scoring with 19 points - including five 3-pointers - in Valpo’s win over Purdue Northwest.

Shooting - The Highs and the Lows
- The difference in Valpo’s 3-point shooting in wins versus losses this year is striking - in its eight victories, Valpo is hitting 40.3% from the 3-point line, while in its six losses, Valpo is shooting just 23.8% from deep.
- Valpo has hit more than four 3-pointers just twice in its six losses and has shot better than 29% from deep in a loss just once.
- Meanwhile, in three of its last four wins, Valpo has shot at least 44% from downtown, including a 15-of-27 effort from deep in its win at George Washington.
- The 15 triples were the program’s highest total against a Division I opponent since going 15-of-26 from deep in a Feb. 5, 2013 win over UIC.