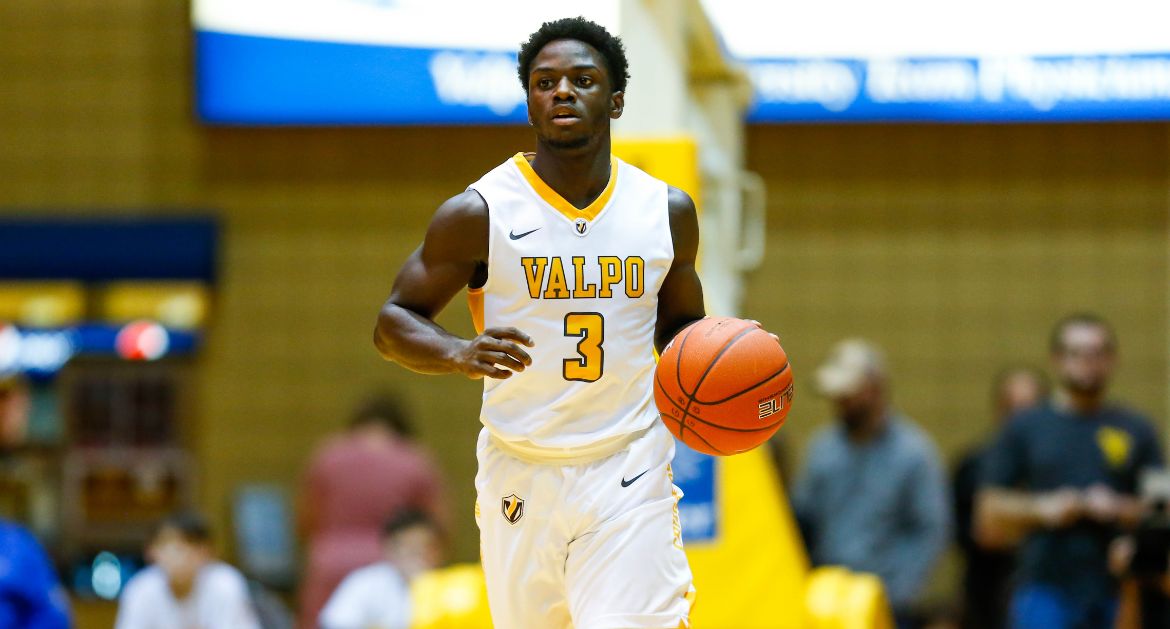 Next Up in Valpo Basketball: The Valparaiso University men’s basketball team puts its unbeaten mark in Missouri Valley Conference play on the line Saturday as it heads to Southern Illinois for a regionally televised matchup. Saturday’s game pits a pair of balanced offenses against each other, as both teams feature five players scoring in double figures.

Last Time Out: Freshman Javon Freeman scored a game-high 17 points and Valpo moved into sole possession of first place in the Missouri Valley Conference, leading nearly start to finish Tuesday night in a 61-50 win over Bradley at the ARC. An 18-2 run in the first half helped Valpo lead by 13 at halftime, and Bradley got no closer than five points in the second half.

Head Coach Matt Lottich: Matt Lottich (49-32) is in his sixth season overall at Valpo and third as head coach in 2018-19. Lottich led Valpo to 15 victories in his second season in charge in 2017-18 and guided the the program through the transition to the MVC, which ended the campaign ranked eighth nationally in conference RPI. In his first year as head coach, Lottich guided Valpo to its fifth Horizon League regular season championship in the last six years as he led the team to 24 wins and an at-large berth into the NIT.

Series Notes: In a series which dates back to 1929, Saturday marks just the seventh meeting all-time between Valpo and SIU. The series, which sat dormant for 37 seasons until Valpo joined the MVC last season, is currently tied at three games apiece. The two squads split their two meetings as conference foes in 2017-18, each defending its home court - Valpo winning at the ARC 83-72, and SIU winning in Carbondale 65-59.

...in the win over Bradley
- For the second straight game, a late first-half run was key, as Valpo outscored Bradley 18-2 over a nine-minute stretch to extend a one-point lead to 17 points.
- Valpo limited the Braves to just one field goal over the final 13 minutes of the first half, taking a 31-18 lead into halftime.
- The lead remained in double figures for the first 15 minutes of the second half, but a 12-2 run by the Braves cut the advantage to 50-45 with less than three minutes to play.
- Bakari Evelyn knocked down a 3-pointer on Valpo’s next possession and then followed by feeding Javon Freeman for a dunk, and Bradley got no closer than eight the rest of the way.
- Freeman led the way with 17 points, his highest scoring output against a D-I opponent this year, on 7-of-10 shooting. He was the only Valpo player to score in double figures, but five others scored between six and nine points.
- Daniel Sackey matched his career high with six assists in the win, four of which came before the game’s first media timeout.

...in the win at Missouri State
- The game was tied at 16-16 with less than nine minutes remaining in the first half before Valpo outscored MSU 30-8 to close the period.
- Valpo scored on 14 of its final 18 possessions of the first half.
- The Bears got no closer than 13 points in the second half - MSU had a shot with 11:09 to play which would have cut Valpo’s lead to 10, but missed, and Valpo followed with 3-pointers from Ryan Fazekas and Bakari Evelyn on its next two possessions.
- Valpo won its first MVC road game of the season after not winning a conference road contest until the regular season finale at Drake last season.
- Four players scored in double figures, while two others finished with nine points as well. Ryan Fazekas led the way with 18 points on a season-best tying six 3-pointers.
- Bakari Evelyn scored 13 off the bench, while Markus Golder finished with 11 points and Derrik Smits 10 points - both coming in just 18 minutes of action.

...looking ahead
- Valpo makes the short trip to Rogers Park to face defending MVC champion Loyola on Tuesday, Jan. 15.
- A return home to the ARC then awaits Valpo on Saturday, Jan. 19 as it hosts UNI for a 3 p.m. tipoff.

@SIU_Basketball
- Southern Illinois enters Saturday night’s game at 9-7 on the year and 2-1 in MVC play, most recently falling at Drake by an 82-70 final.
- Much like Valpo, SIU features five players averaging in double figures, led by Armon Fletcher. Fletcher, who posts 14.6 points per game, returned to action against Drake after missing the Salukis’ previous six games.
- Kavion Pippen, Eric McGill, Sean Lloyd and Aaron Cook all average between 11 and 12 points per game as well.

Looking For 4-0
- Valpo is looking to get to 4-0 in MVC play on Saturday - a mark it has reached in conference play just twice this century.
- Despite winning five regular season titles in its last six seasons in the Horizon League, the 2015-16 season was the only time in that stretch Valpo won even its first two league games, starting 6-0 en route to a 16-2 league record.
- The 2002-03 Valpo squad also started 6-0 on its way to a 12-2 record and a Mid-Continent Conference regular season championship, the only other time this century Valpo has won even three straight games to open conference play.
- Last season, it took Valpo until its 14th MVC game to earn its third conference win.

Getting Gritty on Defense
- It’s been Valpo’s defensive effort which has helped it get out to its 3-0 start in Missouri Valley Conference action.
- Valpo surrendered 69.8 points per game on 44.4% shooting from the floor in non-conference action.
- Meanwhile, in its first three MVC games, Valpo has given up just 57.3 points per game on 37.1% shooting.
- Digging into the analytics, Valpo has held both Illinois State (85 points per 100 possessions) and Bradley (76.4) to their respective worst offensive performances of the season.

Freeman Delivering as a Freshman
- Freshman wing Javon Freeman has been a consistent producer for Valpo as a rookie this season.
- Freeman, who is currently averaging 11.1 points/game, has scored in double figures eight times and has scored seven or more points in all but one of Valpo’s first 16 games.
- Only eight Valpo freshmen in the last 30 years have averaged in double figures - the seven who completed a full four years at Valpo all currently reside among the top-20 in program history in career scoring.
- Meanwhile, halfway through the season, Freeman has tallied 29 steals - well within range to challenge Lubos Barton’s program single-season record of 63 steals.
- Freeman also currently leads the MVC with 1.8 steals/game - since Valpo helped found the Mid-Continent Conference in 1982-83, only seven Valpo players have led their conference in one of the main five statistical categories. None of those seven players were freshmen, and none led their league in steals.
- Freeman is the only Valpo freshman in the last three decades to open his career with five straight games of 10+ points - only two others had started with three straight such games.

Challenging Start to Conference Play
- Valpo’s schedule in the first quarter-plus of MVC play shaped up to be a tough slate entering the season.
- Valpo will face each of the conference’s top four teams in the preseason poll within the first five games of MVC action.
- Valpo has already defeated Illinois State (#2) and Bradley (#4), and faces Southern Illinois (#3) and Loyola (#1) on the road in its next two games.

High Five
- Graduate transfer Deion Lavender has shown the ability to fill up the stat sheet in his first 16 games in a Valpo uniform.
- Last time out in the win over Bradley, Lavender finished with eight points, five rebounds and five assists.
- Six times already in his Valpo career, Lavender has tallied at least five points, five rebounds and five assists in the same game, including each of the last two outings.
- Lavender has matched Lubos Barton’s 2000-01 season for the second-most such games in the last 25 years - only Bryce Drew in his 1997-98 senior season had more such games (eight).

Buzzer Beaters
- Markus Golder’s buzzer-beater against Illinois State added to the lore of last-second shots in Valpo history.
- It was Valpo’s first game-winner with the clock at zero since Ryan Broekhoff connected on a 3-pointer to give Valpo the 70-69 win in the 2013 Horizon League semifinal at the ARC over Green Bay.
- It was Valpo’s first game-winner from beyond halfcourt since Greg Tonagel drilled a heave from the opposite 3-point line for a 71-68 win over Belmont at the ARC on Jan. 11, 1999.
- Of course, the most famous buzzer-beater in program history came courtesy of Bryce Drew in the first round of the 1998 NCAA Tournament versus Ole Miss.
- Golder’s shot came in at the top spot on SportsCenter’s Top 10 on Wednesday night’s countdown. He became the third different Valpo athlete over three different sports to earn a SportsCenter Top 10 spot since Valpo joined The Valley.

Earning Honors
- Junior Ryan Fazekas became the first Valpo player since the program joined the MVC to earn a weekly award from the conference office, as he was named the MVC Newcomer of the Week on Jan. 2.
- Fazekas earned the honor after leading all players in scoring with 19 points - including five 3-pointers - in Valpo’s win over Purdue Northwest.
- Fazekas repeated as MVC Newcomer of the Week Jan. 7 after pouring in 10 3-pointers over Valpo’s first two MVC wins over Illinois State and Missouri State.

Shooting - The Highs and the Lows
- The difference in Valpo’s 3-point shooting in wins versus losses this year is striking - in its nine victories, Valpo is hitting 41.0% from the 3-point line, while in its six losses, Valpo is shooting just 23.8% from deep.
- Valpo has hit more than four 3-pointers just twice in its six losses and has shot better than 29% from deep in a loss just once.
- Meanwhile, in four of its last six wins, Valpo has shot at least 44% from downtown, including a 15-of-27 effort from deep in its win at George Washington and a 12-of-24 performance in the win at Missouri State.
- The 15 triples were the program’s highest total against a Division I opponent since going 15-of-26 from deep in a Feb. 5, 2013 win over UIC.