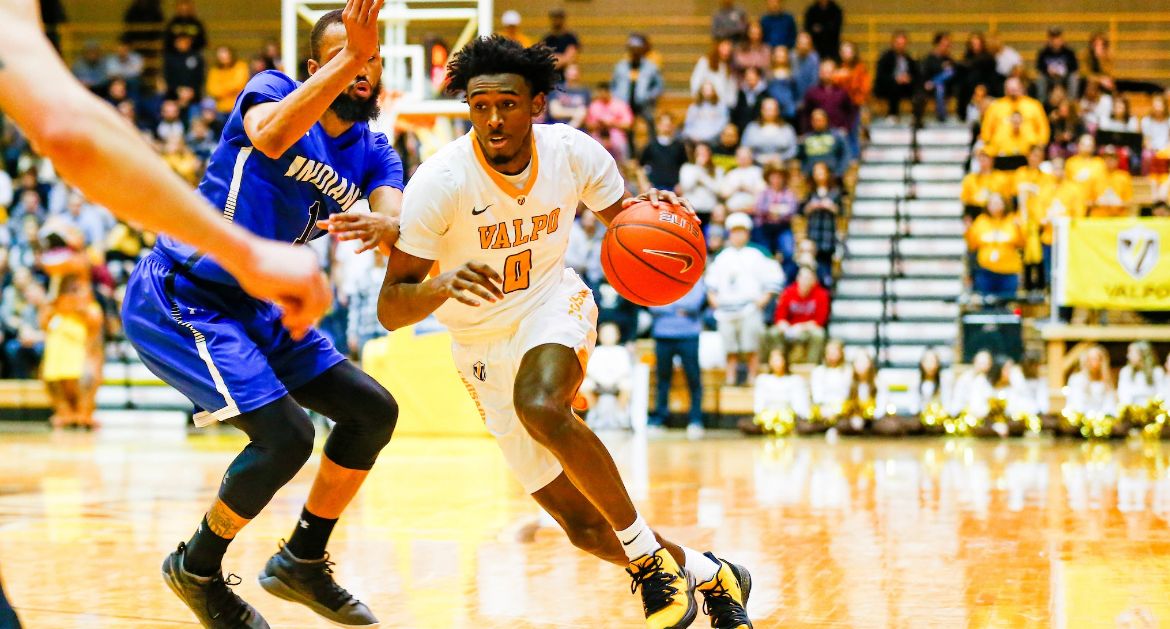 Next Up in Valpo Basketball: The Valparaiso University men’s basketball team returns home to the ARC Wednesday night for its next-to-last home game of the season, hosting Southern Illinois in a key Missouri Valley Conference matchup.

Last Time Out: Trailing by 14 points with two minutes to play Saturday at Drake, Valpo put together a furious push to try to erase the deficit, but while it cut the lead to four points twice in the final minute, Valpo was unable to complete the comeback, falling to the Bulldogs, 84-79. Four players scored 15 or more points in the losing effort, led by 16 points from senior Deion Lavender - his second consecutive 16-point performance.

Head Coach Matt Lottich: Matt Lottich (52-40) is in his sixth season overall at Valpo and third as head coach in 2018-19. Lottich led Valpo to 15 victories in his second season in charge in 2017-18 and guided the the program through the transition to the MVC, which ended the campaign ranked eighth nationally in conference RPI. In his first year as head coach, Lottich guided Valpo to its fifth Horizon League regular season championship in the last six years as he led the team to 24 wins and an at-large berth into the NIT.

Series Notes: In a series which dates back to 1929, Wednesday marks just the eighth meeting all-time between Valpo and SIU. The series, which sat dormant for 37 seasons until Valpo joined the MVC last season, is currently led by Valpo, 4-3. The two squads split their two meetings as conference foes in 2017-18, each defending its home court. Earlier this season, in their first matchup of the year, Valpo earned a 65-61 victory at Carbondale, led by 16 points and eight rebounds from Derrik Smits.

...in the loss at Drake
- Valpo never led, as Drake opened the game on an 8-2 run in the first three and a half minutes.
- Drake led by 15 with less than five minutes to play in the first half before Valpo put together an 11-2 run to move to within 38-32 at the break.
- The Bulldogs extended their lead to double digits for most of the second half and were up 74-60 with 1:52 to play.
- Valpo went on a 15-5 run over the next 63 seconds to close to within four, and actually had two looks to cut a four-point deficit to just one possession in the final 30 seconds, but could not convert.
- Drake took both ends of the season series this year from Valpo after the Crusaders swept the Bulldogs last season.
- The loss was Valpo’s third straight defeat, all of which have come by five points.
- Four Valpo players scored 15 or more points, led by Deion Lavender, who matched his season high with 16 points on 8-of-13 shooting. It was the first time four Valpo players scored 15+ points in the same game since a triple-overtime affair against Mercer on Nov. 29, 2013 - also a Valpo loss.

...in the loss to Indiana State
- Neither team led by more than three points for the final nine minutes of regulation.
- Holding the lead inside the final four minutes, Valpo misfired on five consecutive free throw attempts to allow Indiana State to stay within striking distance.
- Valpo’s Ryan Fazekas hit two free throws with 46 seconds to play in regulation to give the Crusaders a two-point lead, but Indiana State hit a pair with 33.4 to play to tie.
- Valpo got a pair of looks on its final possession, but could not knock either down as the game headed to overtime.
- Indiana State went on top for good 12 seconds into the extra period. The Sycamores pulled out to a seven-point advantage at 79-72 with 2:53 to play, and Valpo could get no closer than three the rest of the way.
- The overtime loss was the second in Valpo’s last three home games, as the Crusaders fell to Missouri State in overtime on Jan. 29.
- The foul line proved to be the difference, as Valpo went just 27-for-40 (67.5%) from the stripe as compared to a 25-of-28 (89.3%) mark for Indiana State.
- Valpo also committed a season-worst 21 turnovers which the Sycamores turned into 29 points.

...looking ahead
- Valpo spends its second straight Saturday in Iowa, playing at UNI on Saturday night.
- Valpo’s final road game of the regular season comes next Wednesday evening at Bradley.

...at the ARC
- Valpo has 15 regular season home games scheduled at the ARC this season and is 7-6 so far this year at home following its loss to Indiana State last Wednesday.
- Valpo will fail to reach double figures in home wins for the first time since the 2009-10 season.
- Valpo has recorded a 64-14 (.821) mark in home games since the start of the 2014-15 season.
- Over the last 23 years, Valpo owns a 299-70 (.810) record on its home court at the ARC.
- Valpo has lost each of its last four MVC home games, its first four-game home losing streak in conference play since losing five straight Mid-Con home games to close out the 1990-91 season.

@SIU_Basketball
- Southern Illinois enters Wednesday night’s game at 14-13 overall this season and with a 7-7 record in MVC play, in a four-way tie for fourth place.
- The Salukis have alternated wins and losses over their last five games, most recently earning a 79-57 win at Indiana State last Saturday.
- Five SIU players score in double figures, led by 15 points per game from leading scorer Armon Fletcher.

The Conference Race
- Through 14 of 18 conference game, Valpo currently sits in eighth place.
- The Crusaders are just one game out of a four-way tie for fourth place, however.
- Of the four teams a game ahead of Valpo, games remain with three of the four, while Valpo already owns a season sweep of Illinois State.
- Valpo beat Bradley, Southern Illinois and UNI in the first meeting with each team this season, giving it the early upper hand in any potential tiebreakers.
- Staying out of the bottom four is key, as the seven through ten seeds have to play on Thursday at Arch Madness and win four games as opposed to three to win the tournament.

Looking to Snap the Skid
- Valpo has lost seven of its last eight games, dating back to a Jan. 23 loss at Indiana State.
- Valpo actually went through a similar stretch last season, losing seven out of eight games in a stretch that ended with the 13th game of MVC play. The Crusaders then won three of their final five games of the regular season.

Lavender Steps Up
- Approaching the final games of his collegiate career, Deion Lavender has enjoyed some of his best performances over the last few outings.
- Lavender is averaging 14.7 points per game over the last three games, highlighted by back-to-back 16-point efforts - his highest scoring output in a Valpo uniform.
- Over those three games, Lavender is connecting at a .696 clip from the field (16-23).
- Lavender has scored in double figures each of the last three games after reaching the 10-point mark just four times in his first 24 games at Valpo.

Freeman Feats
- With his five steals last time out, freshman Javon Freeman now holds the Valpo freshman record for steals in a season with 51.
- Freeman is just one theft shy of Valpo’s single-season top-10 chart and is within striking distance of Lubos Barton’s single-season record of 63, set in 2001-02.
- Freeman was named MVC Newcomer of the Week on Feb. 11 after averaging 22 points per game on 66.7% shooting over the previous two games.
- Freeman’s week was highlighted by a 27-point effort on 11-of-13 shooting at Illinois State, a game which included a 20-point first half.
- Freeman currently leads the MVC in steals - he would become the first Valpo freshman to lead a conference in a major stat category since at least 1982, while only three MVC freshmen have led the conference in a category in the last 40 years.
- Freeman grabbed 15 rebounds in Valpo’s home game against Missouri State, becoming the shortest Valpo player in at least 30 years with a 15-board effort.
- Freeman opened his career with five straight double-figure scoring efforts, the only Valpo freshman to do so in the last 30 years - only two others had even scored in double figures in three straight to open their careers.
- Freeman scored 22 in his debut, the highest-scoring debut by a freshman since Lubos Barton scored 27 in 1998.

Shooting - The Highs and the Lows
- The difference in Valpo’s 3-point shooting in wins versus losses this year is striking - in its 13 victories, Valpo is hitting 40.5% from the 3-point line, while in its 14 losses, Valpo is shooting just 25.5% from deep.
- Valpo has hit better than 33% from 3-point range in a loss just twice this season and is averaging just 4.3 3-pointers/game in defeats.
- Meanwhile,Valpo has enjoyed a number of strong shooting performances in wins, including a 15-of-27 effort from deep in its win at George Washington, a 12-of-24 performance in the win at Missouri State, and most recently a 10-of-23 mark in the win at Illinois State.
- The 15 triples at GW were the program’s highest total against a Division I opponent since going 15-of-26 from deep in a Feb. 5, 2013 win over UIC.