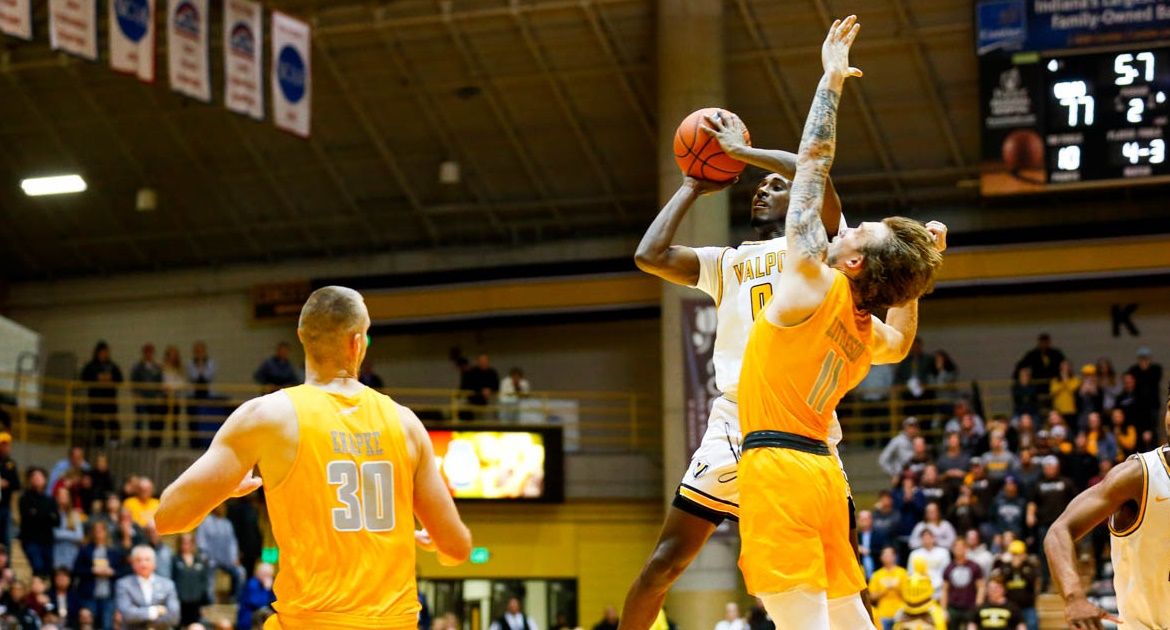 From an early deficit to large runs to late drama, the Valparaiso University men’s basketball season opener seemingly had it all.

And when the dust settled following a thrilling affair with Mid-American Conference West Division preseason favorite Toledo, head coach Matt Lottich’s team found itself 1-0 after a heart-stopping 79-77 victory. The program’s signature player hit a signature shot as sophomore Javon Freeman-Liberty (Chicago, Ill. / Whitney Young) drained an off-balance 15-footer from the left elbow with four seconds remaining, snapping a 77-all tie and sending the Athletics-Recreation Center into a frenzy.

“Obviously, Toledo is a really talented team. They showed their resiliency tonight, and they showed their talent with the way they jumped on us to start the game. We’ve proved to be resilient and competitive in our exhibition games and again tonight. We looked nervous to start the game, and it took us a little bit to get our competitive spirit back. We controlled most of the game, but then they got right back in it. During the last timeout, I just said: “Throw the shot in.” I didn’t know who was going to shoot it, but Javon got a good look and made it. I was really impressed with the way our defense played at the end because there were still four seconds left. Daniel picked up the ball and didn’t let them get a 3 off. It was a great win.”

“There is an emotional component to competing, and our group of players does a better job than I do of not letting the highs and lows affect them much. Even when we were getting drilled at the beginning, the conversation in the huddles was the same as when we were playing really well. That’s why we’re able to do it. We don’t point fingers, and we move on to the next play. We played a lot of guys tonight, and everyone contributed. It was a team effort. I’m proud that our heads seem to stay level no matter what the situation.”

“Emil has been putting in hard work every single day. It’s not a surprise. You see the baskets, but I see the defense. I see him not messing up rotations and taking the challenge of guarding a heck of a player – their center – and doing a great job on him. Everyone has confidence in him, from the coaching staff to the players. It was great to see him play well.”

Valpo (1-0) will hit the road for the first time this season for a Saturday evening affair at Saint Louis. The game will tip off at 6 p.m. CT and will be broadcast on FOX Sports Midwest with the hometown radio call available on 95.1 FM Valparaiso WVUR. Links to live video, audio and stats will be available on ValpoAthletics.com.