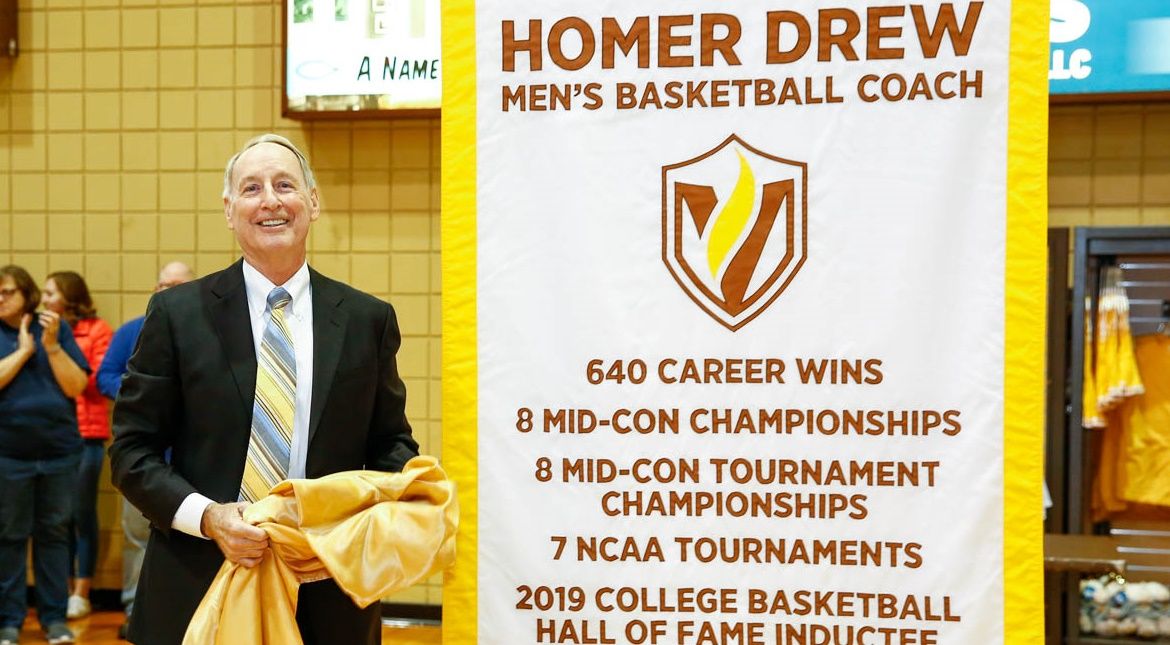 The past met the present in all the right ways on Sunday afternoon at the Athletics-Recreation Center.

A day that started with legendary head coach Homer Drew thanking Valpo fans for their role in the team’s 113-14 record over a decade of ARC dominance ended with head coach Matt Lottich’s team improving its home mark to 4-0 on the season by downing Central Michigan 77-55.

Drew’s recent enshrinement into the National Collegiate Basketball Hall of Fame was celebrated with a pregame banner-raising ceremony, and the reasons to cheer just kept coming for Valpo fans when the game got underway. With Homer Drew, Bryce Drew and numerous other notable alumni looking on, the current team delivered an effort that resembled those of the many successful squads throughout the program’s proud past. The Valpo defense held a Central Michigan team that entered the day leading the nation in scoring average at 93.9 points per game to a season-low 55 points.

“Coming into the game, we challenged our players to be better defensively. We weren’t guarding great, and we had the No. 1 offensive team in the country coming in. We had a couple good practices leading into the game, and I thought it showed. We took a great offensive team and made them shoot tough shots. I was really proud of the effort. That was indicative of what we want to be and who we are, and we want to build on that.”

“It was a very special moment. It was a nice surprise to be elected to the National Collegiate Basketball Hall of Fame. When Athletic Director Mark LaBarbera called about putting a banner up, I was very honored and excited to be able to come back and see a basketball game and see a banner go up, but most of all to be able to thank all of the friends and people of Valparaiso that allowed for that banner to be hung. It took a lot of good players and a lot of good fans. There was a decade where we went 113-14 at home, winning nearly 90 percent of our games. The fans were a big part of that. I can remember them standing and cheering and helping our players, so it was wonderful to be able to come back and say thank you to our friends and fans.”

Valpo (6-4) will not compete this week due to finals, but will return to game action on Monday, Dec. 16 for a 6 p.m. CT tip at Charlotte. The game will air on 49ers TV with links to live video, audio and stats available on ValpoAthletics.com.