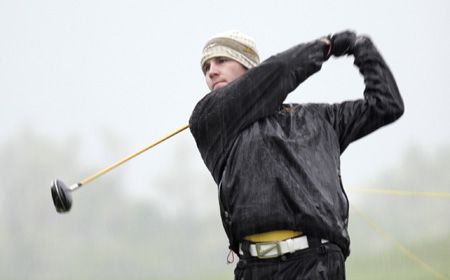 “Our team has really stepped it up,” head coach Mike Higdon said.  “We beat the other two Horizon League programs in the tournament.  This weekend helps us set the bar higher, which is what we are excited about.”

The Crusaders as a team shot 299 in the final round, tied with James Madison for the second best round of the day, and just two shots behind Michigan State.  The Spartans won the tournament at 605 while James Madison was one shot ahead of Valpo’s tournament total of 609.  The Crusaders finished one stroke ahead of defending Horizon League champion Detroit with its best finish since reinstating the program last season.

Sunday’s second round began on Saturday, but only two to four holes per player were completed prior to a suspension of play due to rain.

“To be just one shot out of third place and four out of second shows we were right in contention,” Higdon added.  “We played really well coming out today.”

Henning carded a 73 on day two while fellow freshman Thomas Wettstein (Neenah, Wis./Xavier H.S.) shot an even par round of 72 on the 7,013-yard layout. Wettstein finished tied for seventh overall at 149 (77-72).

Brad Winters (Elgin, Ill./Saint Edward H.S.) shot 76 on day two to finish at 157 overall while Josh Kalita (Chesterton, Ind./Chesterton H.S.) added a 78 to close out the scoring.  Kalita finished with a two-day total of 155.

Valparaiso will have two weeks off before returning to action at the John Piper Intercollegiate held in Bowling Green, Ohio September 27-28.