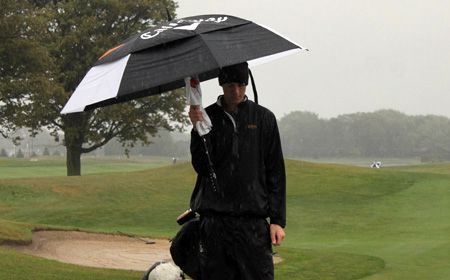 Rain turned out to be the big winner on Tuesday as Austin Gaugert tries to stay dry early in his round. (Valpo Sports Media Relations)

None of the play that did occur will count from Tuesday, and thus the results following Monday’s second round became the final official scores.

“The course just became so wet and there was standing water everywhere,” head coach Mike Higdon said.  “Balls got lost in the fairway after they plugged.”

The steady rain began around 7 p.m. EDT on Monday night and continued throughout the night and into the morning.

Valparaiso finished the tournament in eighth place at 601 (302-299), just six strokes out of a top-three finish.  The Crusaders finished ahead of three other Horizon League schools (Cleveland State, Youngstown State, and Butler), and trailed Wright State by just a stroke.  Host Bowling Green was crowned the tournament champion at 580 (291-289).

Valparaiso will return to the links on Saturday afternoon facing Green Bay and Chicago State in a triangular match held at Lost Marsh Golf Course in Hammond, Ind. beginning at noon.