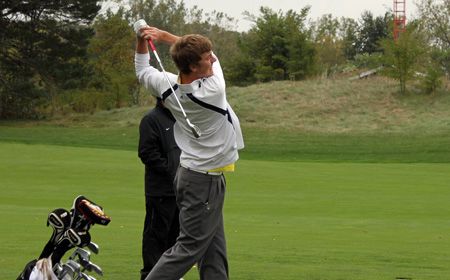 Valparaiso’s men’s golf team set a modern-day school record as a team with a score of 294 on Sunday afternoon, finishing second at a triangular match against Chicago State and Green Bay at Eagle Creek Golf Course in Indianapolis, Ind.

The Crusaders finished two strokes behind Green Bay, as the Phoenix shot 292 on the 6,675-yard, par-71 layout.  Valpo defeated the Cougars, who finished at 317.  Valpo’s previous best score for 18 holes as a team was 298 at the Big Blue Intercollegiate set last spring.

“The men played well today and we don't have anything to hang our heads about,” head coach Mike Higdon said.  “Green Bay just played a little better.  We set a new school record and we are looking forward to tomorrow (Monday) and getting the (Butler) invitational started.  We are going to have to improve tomorrow if we want to compete for the tournament crown.  We are capable of doing that, but we just have play our game and get it done.”

Austin Gaugert (Lake Geneva, Wis./Badger H.S.) and Josh Kalita (Chesterton, Ind./Chesterton H.S.) led the way for the Brown and Gold, each shooting a one-over par 72.  They were one stroke behind Green Bay’s Dan Ozga.  Kyle Henning (Brookfield, Wis./East H.S.) added a 74 for the Crusaders as well.

The Crusaders will return to Eagle Creek on Monday morning for the first 36 holes of the Butler Fall Invitational. The shotgun start begins at 7:30 a.m. CDT.