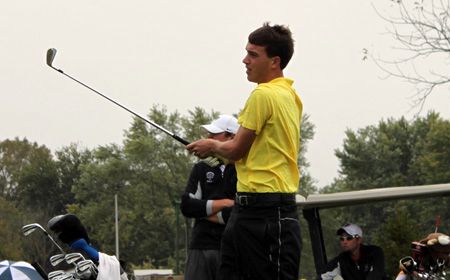 Thomas Wettstein holed out for eagle in the first round. (Valpo Sports Media Relations)
Related Links

Valparaiso University’s men’s golf team shot 315 in the first round of the Dayton Fall Invitational on Monday afternoon and currently sits in 10th place at the midway point playing the South Course at NCR Country Club in Kettering, Ohio.

The Crusaders hold a six shot advantage over 11th place Saint Bonaventure and trail the host Flyers and Robert Morris (Pa.) by six shots each for eighth place.  Evansville holds the day one lead by four shots over Loyola (Chicago) after shooting 292 on Monday over the 7,055-yard, par-71 layout.

“The men are playing an extremely hard course which has hosted both the Senior U.S. Open and the Women’s U.S. Open,” head coach Mike Higdon said.  “When we’re out here playing, we have to stay away from big numbers.”

Kyle Henning (Brookfield, Wis./East H.S.) led the way for Valpo posting a five-over par 76, and is tied for 26th place at the midway point.  Brad Winters (Elgin, Ill./Saint Edward H.S.) added a 78, and is 10 spots back on the leaderboard.

Thomas Wettstein’s (Neenah, Wis./Xavier H.S.) day was highlighted by an eagle on number three (Wettstein’s 17th hole), when the freshman holed out on the 432-yard par four.  Wettstein finished his round at 80.  Austin Gaugert (Lake Geneva, Wis./Badger H.S.) added an 81 for the Crusaders while Andy Webb (Bedford, Ind./North Lawrence H.S.) carded an 88.

“Our finish killed us today,” Higdon added.  “The last three holes for everyone weren’t very good.  Take away those and we were right in the mix.  We need to figure out how to finish better tomorrow.”

Valparaiso returns to the links on Tuesday morning for the final round, beginning with a shotgun start at 8:30 a.m. CDT.