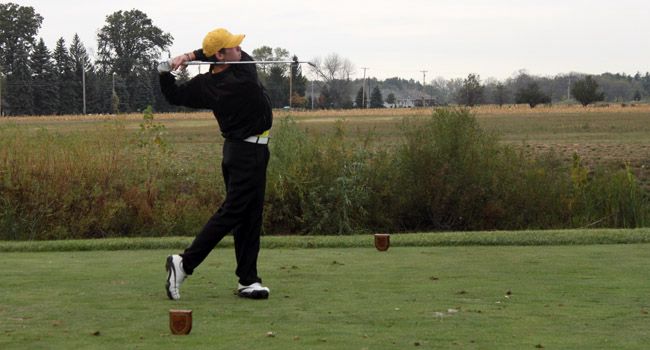 Brad Winters shot one under par 70 in round one. (Valpo Sports Media Relations)
Related Links

Valparaiso turned in its best team round of the season, and second best since reinstating the men’s golf program, on Saturday afternoon in the opening round of the UK Bluegrass Invitational in Lexington, Ky.  The Crusaders shot 292 to finish fifth after the opening round before the second round was suspended for the day due to darkness.

The Crusaders were just five shots behind the leader, Auburn, with their eight-over par total, despite a rain delay of more than two hours.  The 292 total is just two shots behind second place Kentucky and one stroke behind Marshall and Toledo.

Brad Winters (Elgin, Ill./Saint Edward H.S.) led the way for the Crusaders with a one-under par 70 on the 7,013-yard, par 71 layout.  He was tied for fourth after the opening round.  Josh Kalita (Chesterton, Ind./Chesterton H.S.) and Thomas Wettstein (Neenah, Wis./Xavier H.S.) both carded opening round 73s, and were tied for 17th in the 98 player field.

Andy Webb (Bedford, Ind./North Lawrence H.S.) added a 76 for the Brown and Gold while Kyle Henning (Brookfield, Wis./East H.S.) added a 78 to round out the Valpo lineup.

Auburn’s Dominc Bozzelli is the individual leader at four-under par 67 while Chase Parker of Kentucky and Dan Ellis of Michigan State both shot 69, one shot ahead of Winters.

Most teams finished 11 holes of action in the second round of play, which will resume at 7:30 a.m. CDT on Sunday.  The third and final round will then commence upon the completion of round two.