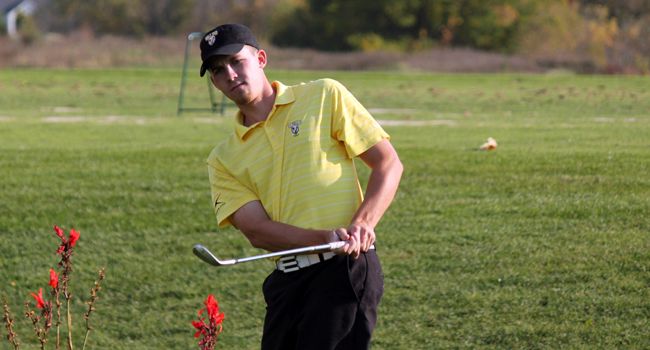 Brad Winters shot an even par round of 72 on Tuesday.
Related Links

Led by a final round 72 by Brad Winters (Elgin, Ill./Saint Edward H.S.), Valparaiso concluded its first tournament of the 2012 spring season on Tuesday afternoon with a fourth place finish at the Butler Spring Invitational held at Prestwick Country Club in Avon, Ind.

Winters’ even par final round placed him in a tie for sixth overall with a 36-hole score of 148.  He led all players in the tournament with eight birdies over the two days.

“Brad played tremendous today,” head coach Dave Gring said following the tournament.  “He was solid for all 36 holes this week and I’m really proud of his effort.”

Brad’s brother Eric Winters (Elgin, Ill./Saint Edward H.S.), playing as an individual, carded the team’s second best round of the day, a 76, to finish the tournament at 154.  He finished in a tie with Austin Gaugert (Lake Geneva, Wis./Badger H.S.), who fired a final round 78 after posting a 76 on day one.

Josh Kalita (Chesterton, Ind./Chesterton H.S.), also playing as an individual, carded a final round 82 to finish at 162 while Thomas Wettstein (Neenah, Wis./Xavier H.S.) finished at 160 after shooting an 86 on Tuesday.

The Crusaders finished with a score of 310 in the final round to finish the tournament at 611, five shots behind third place Cleveland State.  IUPUI won the tournament at 595 while Dayton finished second at 598.  Individually, Dayton’s Sean Keating won the event at two-under par 142 (66-76).

“This was a good start for us with it being our first tournament of the spring season,” Gring added.  “We’re really excited to move on to next week’s tournament.”

Valparaiso will return to action next Monday, competing in the Bea Mussato Invitational hosted by Western Illinois.  The 54-hole event will feature 36 holes on Monday, beginning with a shotgun start at 8:30 a.m. in Macomb, Ill.