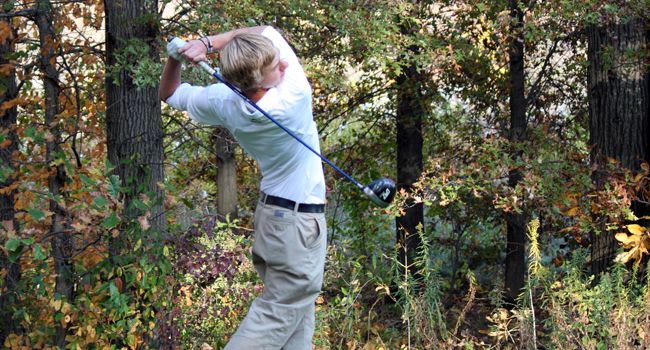 Kyle Henning shot an even par round of 72 on Sunday.
Related Links

Valparaiso’s men’s golf team moved up two places in the team standings on Sunday to finish in a tie for eighth place at the Wolfpack Spring Open with a 607 total at Lonnie Poole Golf Course in Raleigh, N.C.  The Crusaders fired a second round 298, an 11-shot improvement over the opening round.

Valpo finished in a tie with Troy, seven strokes in back of sixth place.  Tournament host North Carolina State won the team title at 577 by four shots over Lamar.

Brad Winters (Elgin, Ill./Saint Edward H.S.) led the Crusaders for the tournament, tying for 28th place with a total of 150 after firing a final round 74.  Andy Webb (Bedford, Ind./North Lawrence H.S.) matched Winters for the team’s second low round of the day, also carding a 74 to finish at 153.

Josh Kalita (Chesterton, Ind./Chesterton H.S.) finished one stroke behind Webb at 154 after posting a 78 over the final 18 holes.  Thomas Wettstein (Neenah, Wis./Xavier H.S.) rounded out the Valpo lineup with an 81 to turn in a 36-hole total of 159.

Valparaiso will play in its final event prior to the Horizon League Championships next weekend, competing at the Earl Yestingsmeier Invitational hosted by Ball State.  The 54-hole event will take place Saturday and Sunday in Muncie, Ind.