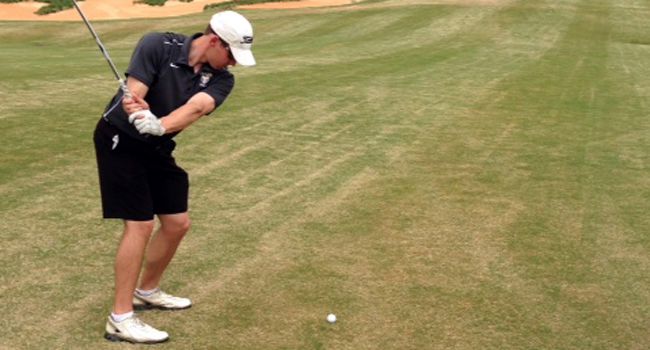 Fifth-year senior Brad Winters (Elgin, Ill./Saint Edward [Dayton]) and junior Kyle Henning (Brookfield, Wis./East) each posted rounds of 4-over par 76 on Sunday to lead the Valparaiso men’s golf team in the final round of the Wolfpack Spring Open at Lonnie Poole GC in Raleigh, N.C.

“Even though we struggled on the greens with making putts, the guys played hard and we learned a lot from this tournament,” Valparaiso head coach David Gring said.

Winters finished with a two-round total of 150 to tie for 25th place. His round featured a pair of birdies for the second-straight day.

“Brad had two solid rounds for us, and his game was very balanced both days,” Gring said.

Henning also recorded two birdies in his round. He ended the tournament in a tie for 31st place with a total of 151.

Senior Austin Gaugert (Lake Geneva, Wis./Badger) and junior Thomas Wettstein (Neenah, Wis./Xavier) both posted final round scores of 77. Wettstein finished with a 36-hole total of 155, while Gaugert had a total score of 156.

Senior Andy Webb (Bedford, Ind./North Lawrence) finished with a two-day total of 157, and senior Josh Kalita (Chesterton, Ind./Chesterton) ended the tournament with a score of 162.

Valparaiso resumes action on Friday, April 26 with the first round of the Horizon League Championship at the Mission Inn Resort in Howey-in-the-Hills, Fla.

“We are excited to compete this next week in Florida for the Horizon League Championship,” Gring said. “We will have terrific weather on a quality golf course.”