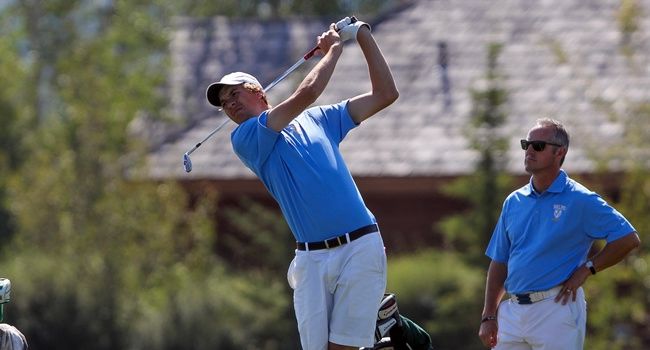 The Crusader men’s golf team posted a team score of 310 in Saturday’s final round of the NCAA Columbus Regional at The Ohio State University Golf Club in Columbus, Ohio.

Valparaiso finished its first-ever NCAA Tournament appearance in 13th place with a three-day total of 927. No. 5 New Mexico on the overall championship.

“The tournament was a tremendous experience, and the team gave it their best,” Valparaiso head coach David Gring said. “While the results were not what we planned for, we learned a lot and were grateful for the opportunity to compete.”

Senior Austin Gaugert (Lake Geneva, Wis./Badger) led the Crusaders for the second-straight day. He posted a 3-over round of 74 to finish tied for 48th at 226.

“We can continue to visualize better from this experience where our program is going and how we can improve,” Gring said. “I’m proud of the guys and their strong effort in this tournament.”

Senior Andy Webb (Bedford, Ind./North Lawrence) and junior Thomas Wettstein (Neenah, Wis./Xavier) each shot rounds of 80. Webb finished with a total of 237, and Wettstein had a score of 238.

Seniors Gaugert, Webb, Winters, Josh Kalita (Chesterton, Ind./Chesterton) and Andrew Beischel (Whitefish Bay, Wis./Whitefish Bay) end their Crusader careers as the first class to spend four years in the program since it was resumed in 2009.

“I have five seniors, and will dearly miss how they completely restarted our golf program in these past four years,” Gring said. “This graduating class will always be our first team to make it to the NCAA Tournament.”

Valparaiso qualified for the Columbus Regional by winning the Horizon League Championship for the first time in school history.

“I really like the winning culture that our team has developed, with success both on the course and in the classroom,” said Gring. “This will continue to improve each year.”

The Crusaders won three tournaments in 2012-13, the first multi-team event victories since the resumption of the program.