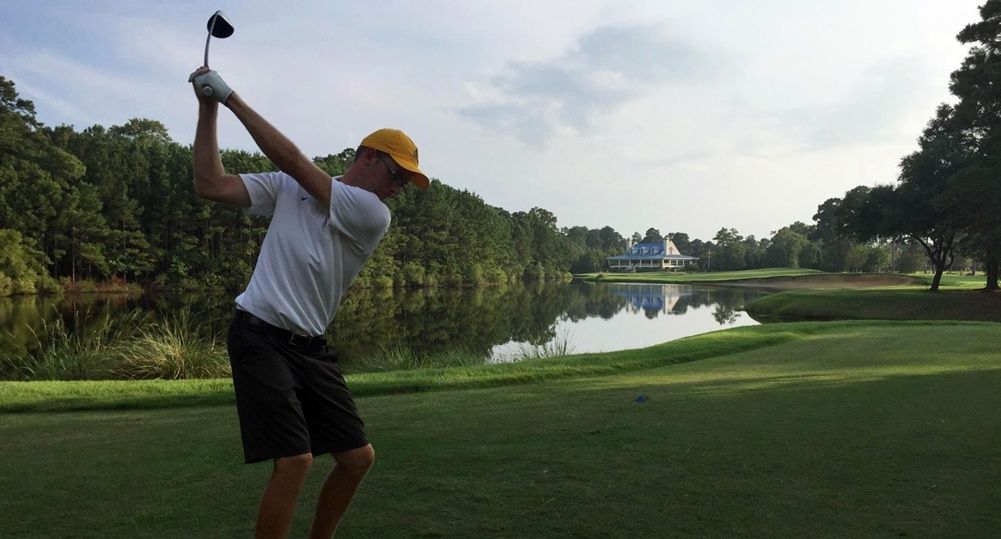 Peter Webb paced the Crusaders with a three-under-par round of 69 Monday.

“Despite playing through a steady rain the entire front nine, the team played even par during that stretch and we were quite pleased with those results,” said Crusader head coach David Gring. “We had some double bogeys on the back nine that cut any momentum, and we need to work at eliminating those big holes.”

Led by junior Peter Webb (Madison, Wis./James Madison Memorial), who shot a 69 (-3) for the Crusaders on Monday, Valpo finished the day with a combined 295 (+7) to place them in 15th position in the team standings heading into tomorrow’s final round. Webb is currently tied for 22nd individually at 143 (-1) through 36 holes.

“Pete played very solid for us today, hitting 15 greens in regulation, 30 putts and four birdies,” said Gring. “The course was pretty wet from the rain overnight and all morning, but Pete struck the ball very well with steady play all day.”

Nick Seitz (Xenia, Ohio/Carrol) shot a 73 (+1) after birdies on holes 9 and 17 Monday. Jared Magoline (Fond du Lac, Wis./Fond du Lac [Marquette]) led the Crusaders with five birdies on the day, including four in a five-hole stretch. The senior finished the day shooting a 74 (+2).

Jacksonville leads the team standings at 552 (-24) through 36 holes. The Crusaders are just nine strokes out of 11th place.

“We have another opportunity tomorrow to play well and close the tournament on a good note,” said Gring. “The team is looking forward to the final round and finishing strong.”

Live scoring for Tuesday’s final round can be accessed on ValpoAthletics.com.