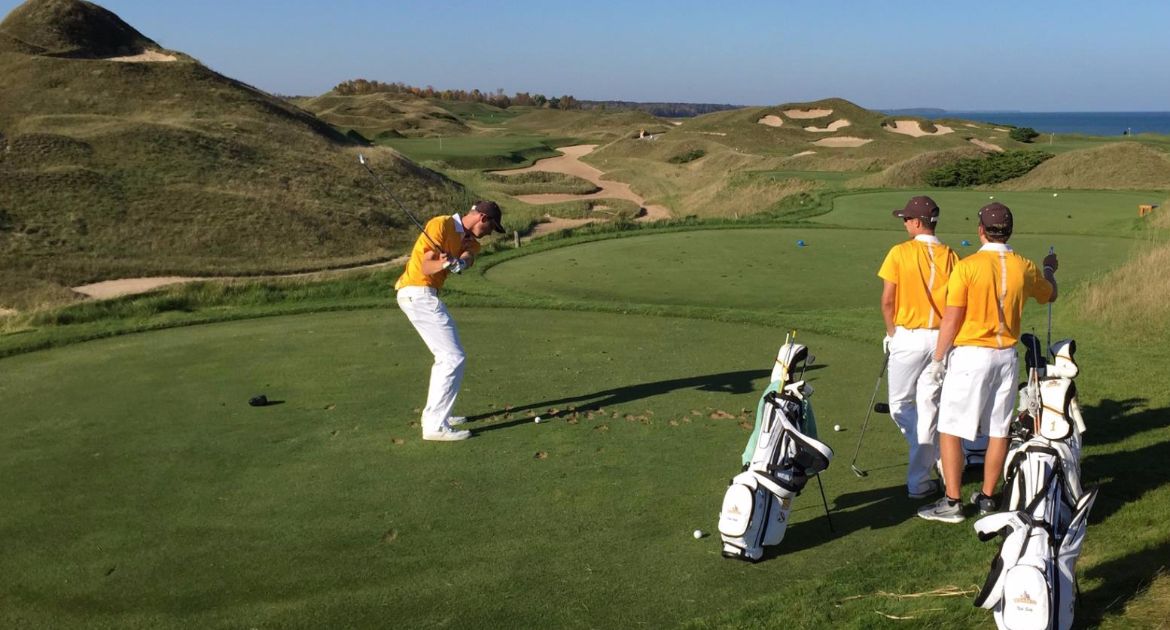 Peter Webb, who paced Valpo on Monday, drives a ball during Sunday's practice round.

The Valparaiso University men’s golf team finds itself near the top of the pack after the first two rounds of the 54-hole Whistling Straits Intercollegiate in Sheboygan, Wis., as the Crusaders sit in third place following Monday’s competition.

“The golf course is a tremendous test and one of the best that we play all year,” said Crusader head coach David Gring. “We started on a challenging stretch of holes and began the first round pretty slow. We settled in to a good rhythm and finished the first round well. In the second round, we had a rough stretch through the middle of the round, but we finished decent.”

The Crusaders posted team rounds of 298 and 304 on Monday to finish the day in third position with a score of 602, just four shots out of second position. Towson enters Tuesday’s final round atop the team standings at 590.

Junior Peter Webb (Madison, Wis./James Madison Memorial) continued his strong play of late, leading the Crusaders through Monday’s two rounds. Webb posted 18-hole scores of 74 and 75 to finish the day at 149, good for a tie for ninth position. Fellow junior Nick Seitz (Xenia, Ohio/Carroll) finds himself in a tie for 15th following rounds of 76 and 75.

Freshman Mitchell Wittmann (Kaukauna, Wis./Kaukauna) is off to a strong start as well, rebounding from an opening 79 to post a round of 73 over the second 18 holes. Wittmann enters Tuesday in a tie for 18th place at 152. Sophomore Zach Cutler (O’Fallon, Mo./Timberland) recorded the team’s low round of the day with an opening 72 and sits in a tie for 20th at 153 over 36 holes, while senior Jared Magoline (Fond du Lac, Wis./Fond du Lac [Marquette]) posted a 159 on Monday and enters the final round tied for 36th position.

“It was good to see a more balanced team effort and the guys played hard for the entire 36 holes,” said Gring.  The wind picked up as the day progressed, and our guys handled the conditions well. We still need to improve on the greens with our putting and eliminating some of the double-bogeys, but we are excited to be in the final group tomorrow. We need to start well, avoid the big holes and scores, and finish the final four holes in a consistent fashion. The guys are focused on the last round and we will look forward to a strong finish to the tournament.”

Valparaiso will close out action from Sheboygan on Tuesday morning with the final 18 holes of the three-round event. Live scoring is available via ValpoAthletics.com.