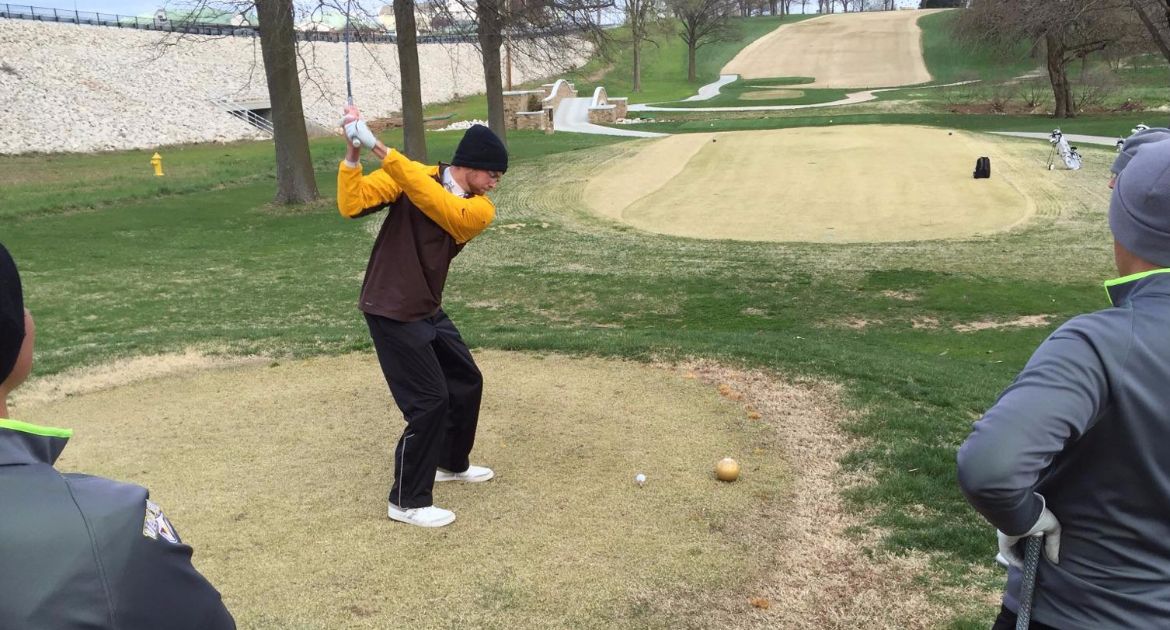 Peter Webb is tied for third with 18 holes to play.

The Valparaiso University men’s golf team finds itself right in the mix for the team title after 36 holes Monday at the inaugural Twin Oaks Intercollegiate, hosted by Missouri State at Twin Oaks C.C. in Springfield, Mo. The Crusaders will enter the final round in third place, just six shots off the lead.

Valpo ended the opening 18 holes atop the tournament field after a team round of 286 in the first round. The Crusaders shot a second-round 302 to drop into third place with a total score of 588 through 36 holes. Host Missouri State sits atop the team standings entering the final round with a 582, while Central Arkansas is just two strokes ahead of the Crusaders in second place.

"I was very pleased with the consistent scoring and overall play in our first round of the day,” said Crusader head coach David Gring. “We only had one big-number hole and we had minimal three-putts - two categories that we need to achieve in every round. Our par-3 and par-5 scoring was along the lines of what we are looking for and we led the field in birdies and pars. Our #4 and #5 players had solid scores that they are capable of shooting.  We didn't play as sharp in the second round, struggling more off the tee with hitting the fairways and we weren't as sharp around the greens. We missed some important putts and we didn't take advantage of the par-5's as well as we did in the first round.”

Valpo was led Monday by solid performances from a pair of juniors. Peter Webb (Madison, Wis./James Madison Memorial) posted rounds of 71 and 72 on the first day of action on the par-71 circuit, finishing the day in a tie for third place with a 143 (+1), just three shots off the individual lead. Meanwhile, Nick Seitz (Xenia, Ohio/Carroll) opened with a round of 72 and then shot a second-round 74 to post a 36-hole score of 146, good for a tie for seventh place.

“Pete played well for us today with two solid rounds on a good golf course,” said Gring. “There are five par-3's on the course and he played them even par for the entire day, along with playing the par-5's a couple under par. Pete's made a lot of good putts and his short game was excellent.”

Sophomore Michael Doherty (Lisle, Ill./Naperville North) rounded out a trio of Crusaders in the top-15 after the opening day of action, finishing the day with a 36-hole score of 149 to tie for 14th position with 18 holes to play. Senior Matt Ward (Plainfield, Ill./South) ended the day one stroke back of Doherty at 150, good for a tie for 19th, while redshirt senior Jared Magoline (Fond du Lac, Wis./Fond du Lac [Marquette]) recorded a two-round score of 156.

Valparaiso closes out the tournament on Tuesday morning.

“We are excited to be in the final group tomorrow and we are looking forward to the opportunity to finish the tournament very well,” concluded Gring.