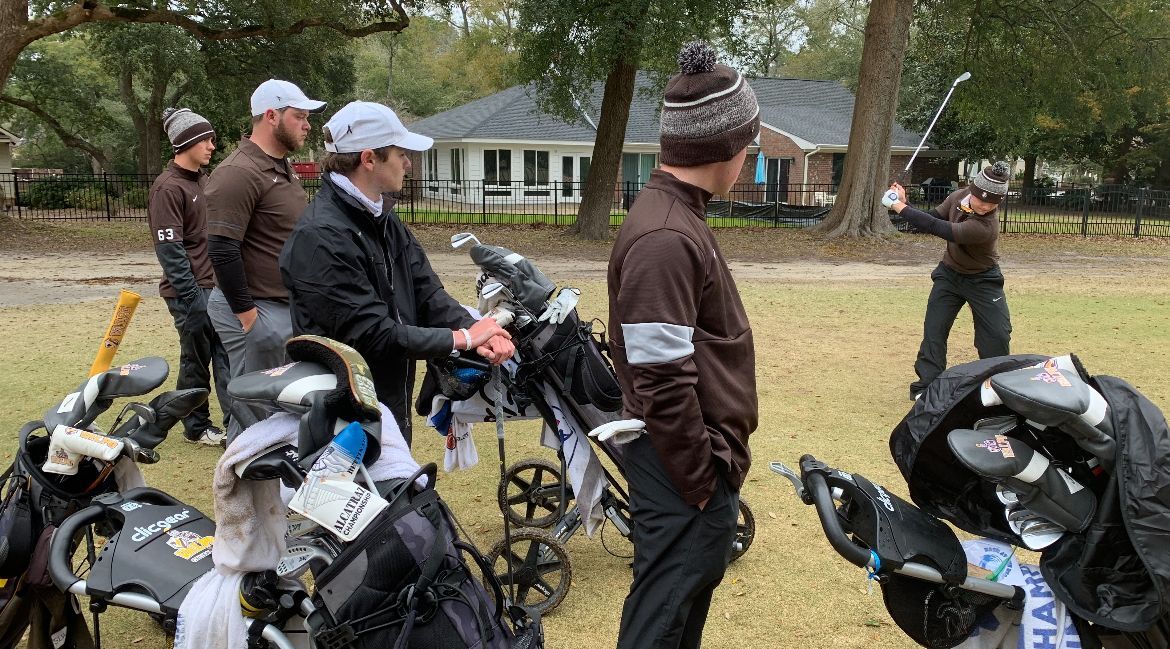 The entire team played together in one group rather than playing with other schools at this week's Bash at the Beach.

Senior Brett Seward (Aurora, Ill. / Aurora Christian) led the Valparaiso University men’s golf team at this week’s Bash at the Beach, hosted at Surf Golf & Beach Club in North Myrtle Beach, S.C. The team finished out the second round and golfed the third round on Tuesday, with Seward carding an even par in both rounds. The team battled rainy weather and windy conditions early in Tuesday’s round.

“While we struggled in the first round to get anything going, the guys bounced back well in the second round yesterday and third round today. We are still trying to clean up the number of double bogeys and three-putts that we have in our rounds. This takes some time to correct coming out of the winter months and kicking off some of the rust. Our Par 3 and Par 5 scoring is not anywhere close to where we want it and this is an area that we will continue to improve. Our ball striking off the tee and our irons into the greens have been terrific in these first two tournaments. We simply need to keep knocking the ball closer to the hole with our approach shots and making more birdie putts.”

“Despite the rainy weather and wind to start the round today, I felt the guys were mentally prepared for the conditions and played steady throughout the round. Our last nine holes of the tournament were our best and the guys really grinded out a strong finish. This team still has a lot of good scoring opportunities left in the tank, and I’m pleased with our improvement since our last tournament.”

“Brett’s ball striking was really good, especially in Rounds 2 and 3. The speed with his putting was excellent, his reads on the green were terrific and he played steady for us. He played in this event his freshman year and you could see his leadership on the course with the team, helping them with their course management.”

Valpo will be back in action next week at the Twin Oaks Intercollegiate, which is hosted in Springfield, Mo. beginning on Monday, March 22.