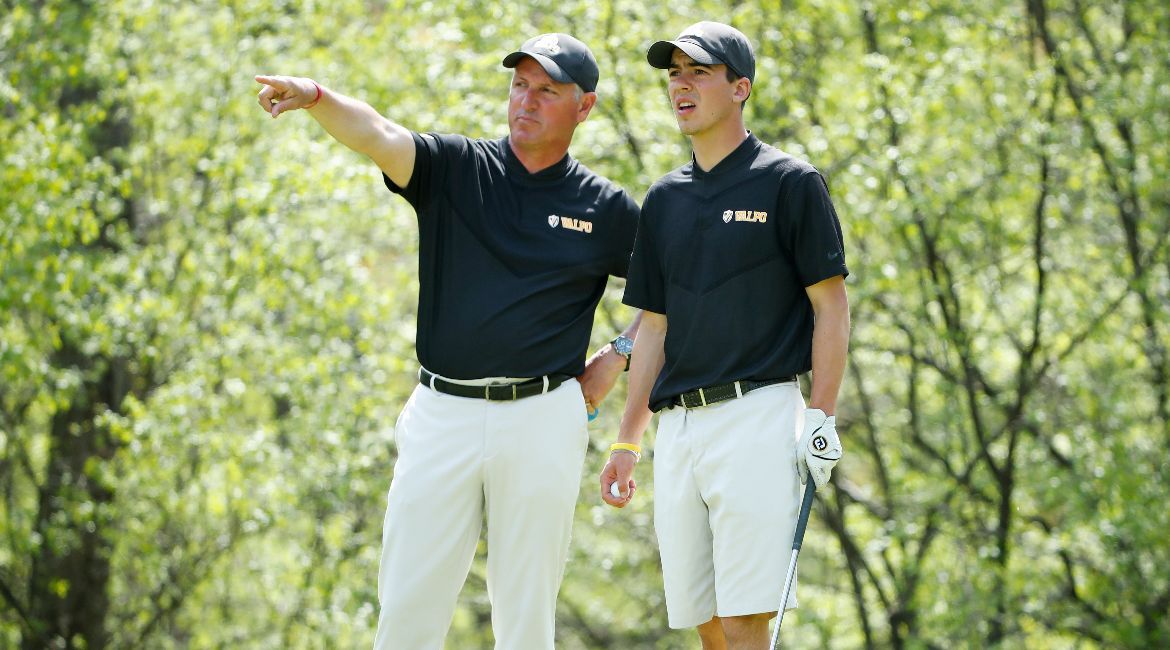 Caleb VanArragon (right) had a 54-hole career low this week at Drake.

Junior Caleb VanArragon (Blaine, Minn. / Blaine) polished off another top-two finish on Tuesday by closing out the Zach Johnson Invitational at five strokes under par over 54 holes. VanArragon’s efforts helped the Valparaiso University men’s golf team finish third in a 15-team field at the event, which was hosted by Drake at Glen Oaks Country Club in West Des Moines, Iowa.

"We had a terrific opportunity today to close the gap on the small stroke deficit after the first two rounds, but we simply weren't able to really get any momentum going today. We seemed to hover around even par the entire tournament and we weren't able to put together that run of birides in any of the rounds. The guys played with terrific attitudes and really grinded until the end. We had a few mental mistakes on the last couple of holes and we couldn't get the putts to drop down the final stretch to stay in contention. We knew we had the opportunity for the win today, but we will chalk another gritty loss to experience and look forward to the next opportunity."
"We led the first two tournaments that we played this fall in Par-5 scoring. We weren't able to take advantage of some pretty easy Par-5s in this tournament and that was one of the factors that led to us falling short. Playing the Par-5s only nine under is just not good enough and it was the primary difference between us and the top two teams. We left a lot of opportunities out there on the putting greens, but they were quite challenging and the entire field played the same greens. We just weren't quite sharp enough with our shot execution when we really needed it during some points during the rounds and that led to us coming up short at the end."
"I'm proud of this team and what we have been able to accomplish this fall in our first three tournaments. We have over an 82 percent winning percentage and three Top-5 finishes in the first three events. We have some new faces on our team that are still learning our team culture and how we prepare for and manage our tournaments. Everyone is playing hard and really putting a lot of heart into the tournaments and that's what we want to see in each event. We have another week to prepare and practice for our next tournament and the guys are ready to put in the work."

The team will compete in the Spirit Hollow Fall Shootout on Wednesday, Oct. 6 in Burlington, Iowa.