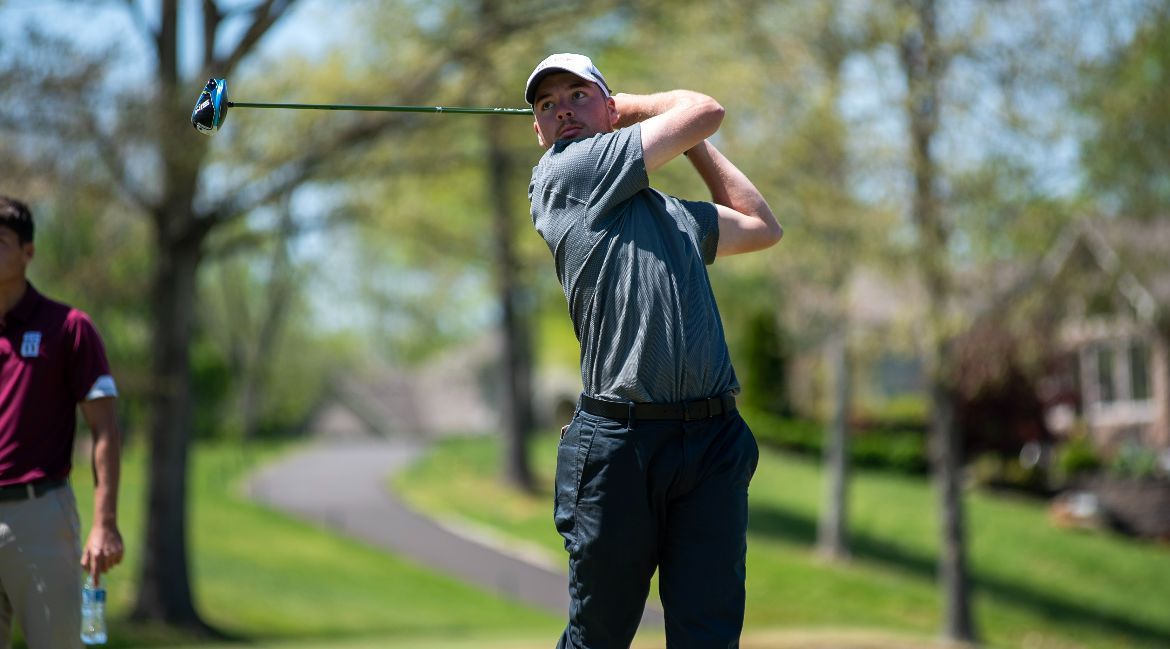 Anthony Delisanti finished at t-15 at the NCAA Regional.

Valparaiso University men’s golf standout Anthony Delisanti (Sanborn, N.Y. / Niagara Wheatfield) finished off a freshman season that won’t soon be forgotten with one final highlight on Wednesday in the final round of the NCAA Columbus Regional, hosted by The Ohio State University in Columbus, Ohio.

The 2022 Missouri Valley Conference individual medalist vaulted into the top 15 on the player leaderboard in an ultra-competitive, 75-player NCAA Regional field. Delisanti shot under par for the second consecutive day, posting a 70 on the par-71, 7422-yard Scarlet Course to finish the tournament with a 54-hole score of 214 (+1).

“I couldn’t be prouder of Anthony and all of his efforts and preparation for the NCAA Columbus Regional over these past two weeks,” head coach Dave Gring said. “It was a joy and a blessing to walk with him the entire 54 holes, talking through the various shots and watching him execute at a high level on a championship golf course. He was very calm and comfortable and showed a lot of poise in all three of the rounds, going through his pre-shot routine and staying disciplined to the game plan for each round. He still had an opportunity to advance to the NCAA Finals with only five holes to play. He kept playing hard and staying focused, finishing those last five holes at one under. While he finished only four shots short, it was a marvelous experience for both him and me.”

Delisanti moved up five places on the leaderboard on Wednesday, jumping into a tie for 15th. He thrived on par-4 holes throughout the tournament, posting a 3.91 average that ranked third on those holes out of the 75 competitors. Delisanti had 39 pars to go along with eight birdies during the event. No. 2 Oklahoma State and No. 11 Georgia Tech tied for the team title, while Eugenio Lopez-Chacarra of Oklahoma State won individual medalist honors.

“Anthony averaged hitting just over 12 greens per round, which is impressive since he averaged hitting just over seven fairways per round. It’s very challenging to even hit the greens in regulation from the long rough, not to mention getting the ball anywhere close to the hole. I found it quite impressive that he finished the 54-hole tournament at one over par, despite not hitting enough fairways. Conversely, his putting was exceptional. The green complexes are very well designed, and Anthony averaged just over 30 putts per round and +0.11 strokes gained putting. He only missed two putts inside of eight feet; he only had one short-side chip/pitch and he didn’t 3-putt once the entire tournament.”

The MVC Newcomer of the Year’s NCAA appearance tied a bow on a successful season that saw the Beacons shatter the modern program record for team scoring average and finish as the runner-up at the MVC Championship. Gring’s group has continued to take steps forward with each passing season and the future of Valpo men’s golf is as bright as ever.

“For a team or an individual to participate in the NCAA Regional is an immense honor and a tremendous achievement,” Gring said. “To have one of our freshmen qualify for the NCAA Regional is a treasure. Anthony’s performance was a terrific exclamation point for his season and our team’s season when you consider all that he achieved and our team achieved this year.  We will take some time to savor this past season and look forward to our 2022-23 season with great excitement!”