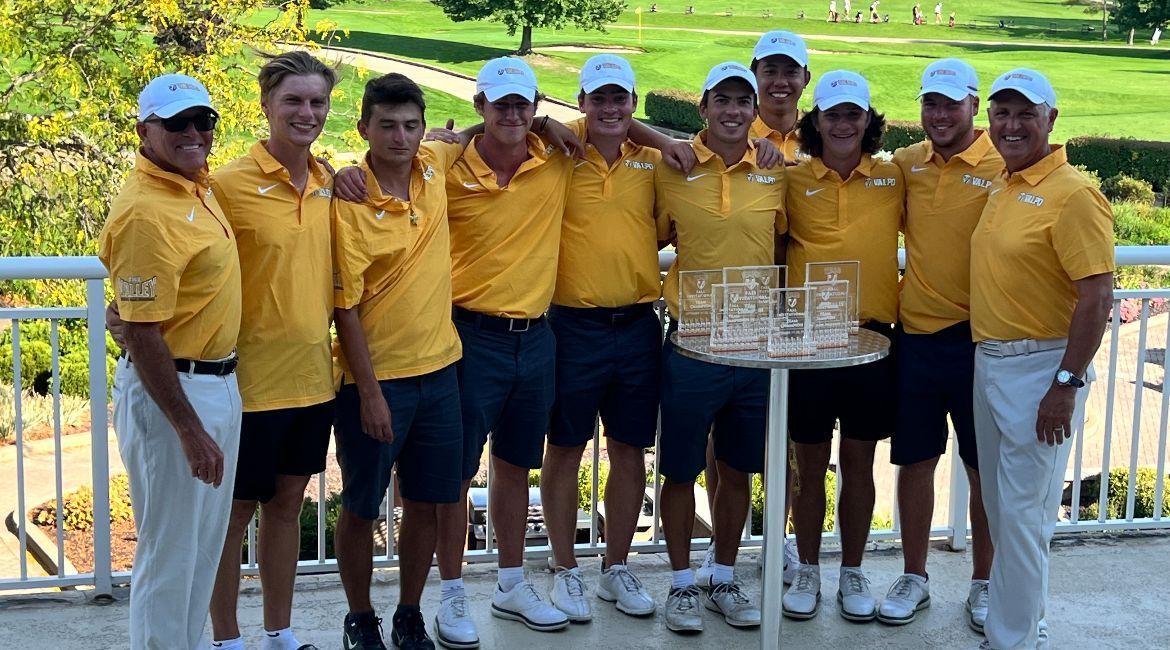 The Beacons finished 34 strokes ahead of the team runner-up in a 17-team field, capturing the team crown in dominant fashion while sophomore Anthony Delisanti (Sanborn, N.Y. / Niagara Wheatfield) and senior Caleb VanArragon (Blaine, Minn. / Blaine) swept the top two spots, finishing as the individual medalist and individual runner-up, respectively, in a 99-player field.

“In my 12 years of coaching, I can't think of a better ‘team’ victory than this one. Every victory is sweet and unique and each one stands alone. This one was special since we had many people within the Valpo Athletic Department assisting us in hosting the home tournament, the Sand Creek Country Club staff was flawless in preparing the golf course and our team had an amazing week-plus of practice. Add to that the final round performance of all seven of our players, and it was truly a team victory. To win our tournament on our home course in front of family, friends and alumni was quite memorable for us.”

“I'm really proud of the entire team and the preparation that each of them made towards the tournament. I felt that they came into the event with a tremendous amount of confidence, and we had a good game plan in place to manage the course. The guys had a quiet confidence about them for all three rounds and their course management and execution was exemplary. I’m very pleased with our finish to the tournament and playing hard for the entire 54 holes. We finished the final round playing the last five holes 10 under.”

“We have a lot of positive takeaways from the event. While we still need to tighten up our Par-3 scoring, our Par-5 scoring was one of the best that we have had in a couple years. Nine of our 15 rounds were par or better, and both Caleb and Anthony played all three rounds under par. We led the field with 61 birdies in the three rounds and the team never wavered in maintaining the lead over those three rounds. Anthony and Caleb were in a dogfight for the medalist honors and that literally came down to the last hole for Anthony to take home the award. These guys love to push each other in practice and we saw that spill over into the three days of competition. We are going to really enjoy and savor the victory for a few days and get back to work for our next event this coming weekend.”

Valpo will return to the course on Monday, Sept. 26 to tee off the Zach Johnson Invitational at Glen Oaks CC in West Des Moines, Iowa.