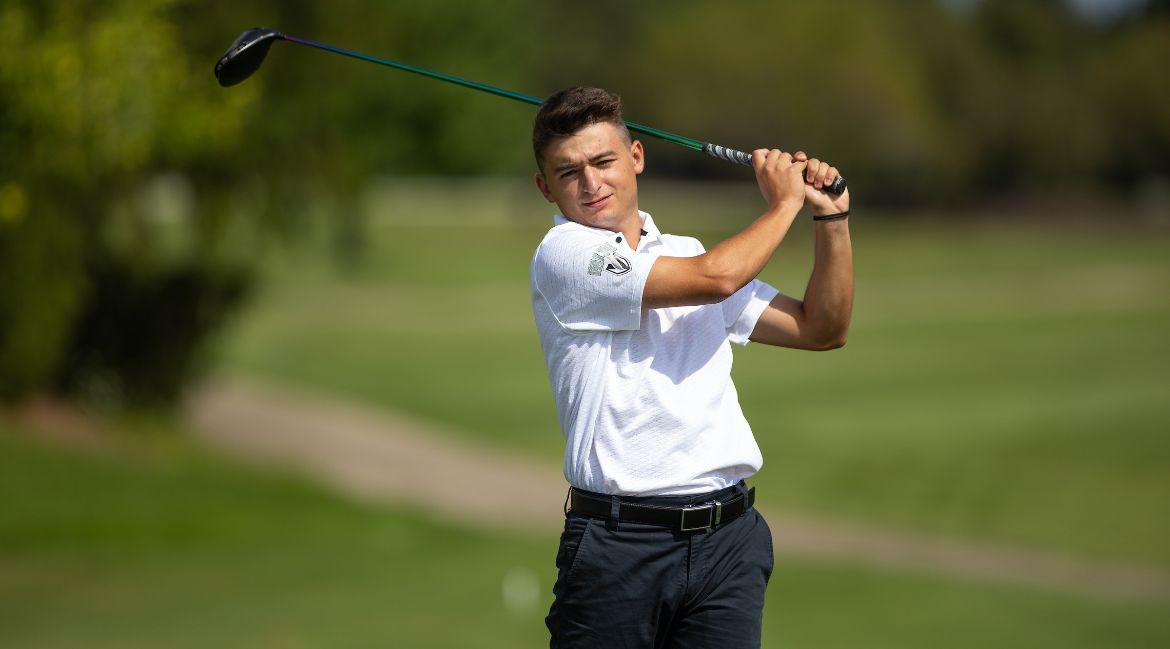 Yianni Kostouros is second on the players leaderboard through 36 holes.

The Valparaiso University men’s golf team is 18 holes away from closing out a commendable fall season with perhaps its most significant achievement yet. The Beacons hold a slim edge atop the team leaderboard at the Iowa Fall Classic, which began with two rounds on Sunday in chilly and windy conditions at the par-72, 7141-yard Blue Top Ridge in Riverside, Iowa. A strong first round helped head coach Dave Gring’s team finish the day with a one-stroke lead on the host Hawkeyes, a member of the Big Ten Conference.

“Playing 36 holes today was a real test of patience, perseverance and character. We knew the weather was going to be a factor and get worse as the day progressed. We started with temps in the 30s at the start of the tournament, and the day ended with steady 20 mph winds and wind chills in the low 40s. Add to that the excellent green complexes on the course and the necessity to ‘hit to zones’ on the putting greens, and it made for a challenging day. The second rounds scores for the entire field were two shots per round higher than the first round, which is significant.”

“I felt that the first 30 holes today were some of the best golf that we have played this fall. All of the guys were methodical in figuring their yardages into greens, decisive with their club selections and they made solid, aggressive swings. The results were shots on-target and missing to the correct side of the hole. We had an excellent start to our rounds, making some quality birdies on the front nine. Each nine of the first 27 holes found us just over par as a team.  Unfortunately, that shifted in our last six holes, when conditions were very challenging and we played those holes 16 over par to finish the day.”

“Yianni played really steady for us today. His shots off the tee were exceptional, and he played with a lot of confidence throughout both rounds. He played with a lot of poise and made a lot of good decisions in managing the golf course. As we shift to tomorrow, our rounds are going to be all about character and how we manage our mental game and handle the inclement weather conditions that will even be worse than today. It’s going to be even more of a grind than today, but the guys are excited for the challenge and we will be ready to get after it.”

The fall season will conclude on Monday, the final day of the Iowa Fall Classic. A link to live scoring is available on ValpoAthletics.com.